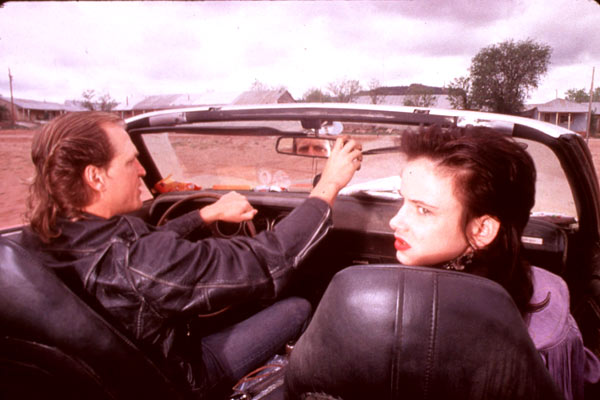 The soundtrack album for Oliver Stone’s Natural Born Killers is one of the most notable al­bums of 1994–as an album. “Produced, conceived, and assembled” by Trent Reznor of Nine Inch Nails and issued on nothing/Interscope, this project can be taken as a work as personal as the movie itself. On the record, the musical narrative is so vivid it breaks the tyranny that the visual element almost always exercises over sound in a film. Playing Natural Born Killers is not so much to be reminded of Oliver Stone’s narrative as to misre­member it, to recompose or reassemble the movie yourself.

With a seamless touch, Reznor fades dialogue and the film’s nonmusical sounds–mostly gunfire–over and under or even through musical performances, which are themselves sometimes doubled. In the sound collage “Sex Is Violent,” Diamanda Galás is groaning her version of Screamin’ Jay Hawkins’s “I Put a Spell on You,” a performance that on its own terms implies blood smeared over the singer’s body, when a shocked but thrilled voice rings out: “Holy shit! You’re Mallory Knox, ain’t you!” Galás keeps chanting her song title as Perry Farrell–who we’ve earlier heard, in Jane’s Addiction’s “Ted Just Admit It,” explaining why “nothing’s shocking”–is chanting, “SEX IS VI-O-LENT” over and over. There are confusing noises you can’t separate; fast, desperate movement; then the all-but-inevitable blam, blam, blam. The singers go on at their own pace.

While Reznor’s dialogue and choice of mise en scène give you some sense of where you are in the movie at any given point, that’s all they do. Reznor mostly ignores Stone’s climaxes or crucial transitions in favor of speeches so punchy that you can listen to them again and again, following their ups and downs as if they were music (the speed rap by Tom Sizemore’s cop on how his mother was shot by Charles Whitman from the Texas Tower sounds more demented and gleeful every time you hear it).

All in all, the soundtrack is a shapely, extended–over seventy-five minutes–little drama of clarity and sleaze: the constantly interrupted orchestration of a sort of shared cultural memory of affection and possibility versus a continual apprehension of abjection and violence, an apprehension that is never interrupted but merely, in moments, suspended. The delicacy with which Bob Dylan invests his newly recorded solo version of the standard “You Belong to Me” (“See the pyramids along the Nile…”) at first barely draws breath against the heavy-metal upsurge of L7’s cool “Shitlist” or Patti Smith’s horrid “Rock N Roll Nigger”; when Dylan’s performance fades into Duane Eddy’s suddenly enormous “The Trembler,” it completely, immediately disappears. Nothing’s so shocking as the appearance of Patsy Cline’s open, free singing on “Back in Baby’s Arms” in the midst of the dank, mysterioso world-music tangles of Peter Gabriel and Nusrat Fateh All Khan’s “Taboo” and Remmy Ongala and Orchestre Super Matimila’s “Kipenda Roho.”

Maybe Patsy Cline is just what you might hear in a coffee shop on Route 66, one of those places where, as Robert Downey, Jr.’s tabloid-TV reporter has just told you, Mickey and Mallory like to choose their victims (“Route 666,” Downey says); at the same time, her voice communicates as a talisman of how open and free you might have once believed the road to be. You want to go with the song, all the way, right out of this cruel, happy-go-lucky slaughterhouse of a movie, but the soundtrack album won’t let you. It strands you in a desert of its own making, bordered north and south, east and west, beginning and end, by that grand old man of movie soundtracks, Leonard Cohen.

My all-time favorite lead for a record review (Alec Dubro, Rolling Stone, May 17, 1969): “Well, it looks like Leonard Cohen’s second try won’t have them dancing in the streets either.” (In Atom Egoyan’s movie Exotica, a young stripper tries to dance to Cohen’s anthem to smug cynicism, “Everybody Knows,” and almost falls down in search of a rhythm.) There’s something about Cohen’s voice, so heavy with its own sententiousness, that’s irresistible to movie people. Suggesting the leer of a dirty old man beneath the wisdom of the Old Man of the Mountains, Cohen’s tone provides a cheap mes­sage and a cheap thrill all at once. As a soundtrack artist, he broke through in 1971 in Robert Altman’s great McCabe & Mrs. Miller; “The Stranger Song,” “Sisters of Mercy,” and “Winter Lady” stopped the movie dead on cue, offering a darkness, a fatefulness the movie didn’t need. In 1990, in Allan Moyle’s Pump Up the Volume, Concrete Blonde’s version of “Everybody Knows” was a gratuitous theme song for Christian Slater’s outlaw disc jockey, who as a disembodied voice had already kicked off the film with a classic opening line: “Do you ever get the feeling this country is completely fucked?”

For Natural Born Killers, Cohen opens the soundtrack with “Waiting for the Miracle,” and for once something is added. The pace is so unbearably slow, so weighed down by all the miracles that have never happened or with all the seeming miracles that vanished so quickly–the smiles on the faces of students at Tiananmen Square, if that moved you, the fierce commitment to the riddle of life you heard in Kurt Cobain’s songs, if you did–that the song sets you up to accept almost anything, almost any eruption of emotion, as a miracle, even if it’s two brainless kids killing everything in their path. “The Future,” Cohen’s film-closing number, is for him a bouncy affair–a loose, self-congratulatory celebration of doom that lets you out of the theater easily, exhilarated, talking about what you’ve just seen.

But while this is probably the last music you hear in the theater, it is not the end of the soundtrack. The crawl music is the Dogg Pound’s intricate, puzzling, truly scary “What Would U Do?” It puts you right back in a killer’s sights, makes you squirm. What would you do? Probably you’d scream like 0-Ian Jones’s terrified waitress. As Reznor’s disc plays, the song seems to go on forever. It goes on long enough to hear that, on this strange record–where performers pass each other in a pleasing anonymity, where voices emerge mostly to be swept away by others, or by none at all–Snoop Doggy Dogg and Bob Dylan have more in common than Bob Dylan and Leonard Cohen, or Snoop Doggy Dogg and Dr. Dre, and that’s something you’re not likely to hear anywhere else.