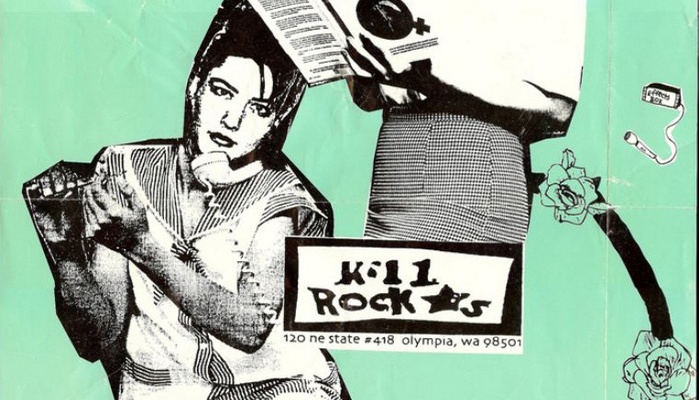 Julie Ruin used to be Kathleen Hanna of Bikini Kill. She dressed rough; onstage she sometimes took off her top to show SLUT painted on he skin. The three girl-one boy band made harsh, screechy, funny, unsettling records about gender politics and everyday life, and their whole attack was summed up with two song titles on the 1996 Reject All American: “Statement of Vindication” followed by “Capri Pants.” Now the former Hanna dresses like a librarian or a ’60s teaching assistant, with a thick headband, paisley blouse, big belt, dark shirt, knee-length boots. For the cover of Julie Ruin (Kill Rock Stars) she’s posed in front of her Room of One’s Own. There’s a big table covered with books, and shelves filled with them. For this “project,” her press release announces, “she set out to explore the following questions”–among them, “What would L’Ecriture Feminine sound like as music?” It’d be a hoot, if Julie Ruin is the answer: Made out of mainstream samples and midnight warbling, the sound is an exercise in methodology served up as ice cream.

Corin Tucker of Sleater-Kinney is still Corin Tucker of Sleater-Kinney, at least most of the time, but for the barely produced surf ‘n’ Go-Go’s mess-around Introducing… Cadallaca (K) she is temporarily Kissy, just as her new bandmates Sarah Dougher and the woman who goes by sts (both of the Lookers) are Dusty and Junior. Tucker dresses primly for Sleater-Kinney: It adds to the shock effect when she takes a room apart with her guitar, when she opens her mouth and a voice as big as a house and fast as a horse comes out. Here the three women put on lipstick and dark glasses and pose on a breathtaking 1966 gold El Dorado; they couldn’t look more at home on it if their parents had bought it for them. Tucker’s voice is smaller, and her guitarwork is strictly functional, a narrative device. Vocally, Dougher is as much of a presence, and it’s her cheesy Farfisa organ playing against Junior’s drums that keeps the record moving.

These discs are makeovers, and as makeovers they’re toys. Ruin makes much of her use of a “broken sampler” for her record. It works OK. She drafts the Kinks’ “All Day and All of the Night” and Foreigner’s “I Want to Know What Love Is” in the service of personal manifestos and rants about sexual violence. It’s not ironic to hear the chorus of “I Want to Know What Love Is”–the greatest single of the ’80s, a masterpiece of mystery and transcendence–used to dramatize “JonBenet didn’t scream ’cause she never fucking was.” The juxtaposition does justice to the depth of both the unresolved crime and the unresolved song.

Ruin has a sharp, nimble little-girl voice, and she can use it, as she often did in Bikini Kill, to set you up not to take her seriously, whereupon she might hit you over the head. Here you don’t have to take her seriously. Her voice has the sound of a person playing–playing with the dial of a radio, as she summed up her Julie Ruin aesthetics for the fanzine Susan Junior: “I wanted to sound like a girl who can’t play any instruments tweaking out an AM radio. Like when I was little my mom had this TV band radio that she’d listen to soaps on while she was ironing clothes or whatever and sometimes I’d put the thing between two stations so that the words of the show were totally obscured but there was still something there, some noise, a pattern, a faint drum sound or something and I’d sing to it.” It’s perfect. These were the accidental aesthetics of one of the seminal experiments in pop music history. The initial reaction to the combination of an orchestral string section and R&B vocals on the Drifters’ 1959 “There Goes My Baby,” producers Jerry Leiber and Mike Stoller recalled, was that the record seemed like a mistake. It sounded like a dial stuck between two stations, one playing classical, the other rock ‘n’ roll. Making history is all very well, but playing with it must be heaven.

There are fine, even ambitious songs on Introducing… Cadallaca, and sharp ensemble work; I like the rehearsal quality of the music, the way the pure ? and the Mysterians homage of Dusty/Dougher’s organ sound sneaks up on you (give her a cue, you get 96 tears in change), and the snazzy lift the band puts into a bilious put-down, as if it’s most of all fun to shred fools, not merely for, you know, their own good. “Two Beers Later” is, in moments, Corin Tucker at her most pissed off and betrayed; the odd-stepped rhythm on the verses, the quickened pace behind the ache in the words, might be this person with the bright lipstick named Kissy. Cadallaca talk about ’60s girl groups, but if you hear the Crystals or the Shangri-Las here you have better ears than I do; they didn’t whine, and Cadallaca love to whine. “O Chenilla” is a pathetic teenage plea, a nobody begging a heartbreaker to pay attention to her; that both are girls is utterly irrelevant. If you ever were a teenager, or listened to the radio, you felt just like this. “I’ll stay with you to the end of time,” Dusty says to Chenilla, who you can imagine throwing up at the notion if she weren’t laughing so hard.

Both Julie Ruin and Introducing… Cadallaca are fetish pieces: They’re as much about pop as they are pop. You hear people fooling around with the conventions of pop music as if they’ve just discovered there are conventions: tools, batteries, screwdrivers, lightbulbs, switches, turn it on, turn it off. But what you don’t really hear are goals–you don’t hear why people are fooling with pop conventions. That’s because there doesn’t have to be a reason. It’s done for the pleasure a fetish gives.