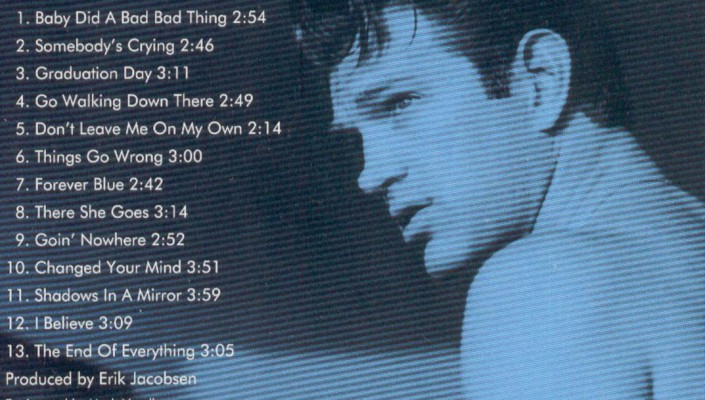 Chris Isaak is a longtime San Francisco pretender to the rockabilly throne, whose James Dean looks and Presley moodiness have rarely taken him much past genre. His music is shrouded in restraint. It’s thoughtful even at its most passionate; every drama is an interior monologue. These qualities are taken to extremes on Forever Blue (Reprise, 1995), and the result is a sense of the exquisite, of an emotional and moral landscape so perfect and fragile that the slightest sound or gesture produces huge echoes and vast gusts of wind.

The same thing happens on Gentle Creatures (4 AD), the first (and apparently last) full-length album from the San Francisco country band Tar­nation—a quiet, meandering ensemble led by singer, writer, and instrumentalist (guitar/bass/optigan) Paula Frazer. “Posthumous country” Tarnation’s music has been called, and that’s close to the mark—the music makes you feel like you’re listening to a dead genre, or a dead singer. Frazer wanders the same bleak and glassy terrain Isaak does, and with the same exquisiteness, which can also mean bloodlessness. What’s concealed on Forever Blue is right on the surface of Gentle Creatures: decay. If here a whisper sounds like a scream, a scream sounds like a last gasp.

Were Isaak in the band, you could picture Tarnation as the perfect chamber-orchestra-in-residence at the House of Usher, one of Edgar Allan Poe’s most famous, most claustrophobic creations—a moldering mansion where live the neurasthenic Roderick Usher and his expiring sister, Madeline, the last of their line. While Madeline goes about dying, Roder­ick plays guitar and composes ballads, paeans to dashed hopes and cursed dreams. “An excited and highly distempered ideality threw a sul­phureous lustre over all,” wrote Poe.

It isn’t clear what’s wrong with Madeline, but Roderick is plainly too exquisite to live: “He suffered much from a morbid acuteness of the senses; the most insipid food was alone endurable; he could wear only garments of certain texture; the odors of all flowers were oppressive… and there were but peculiar sounds, and these from stringed instruments, which did not inspire him with horror.” His own music is just as imprisoned: “It was, perhaps, the narrow limits to which he thus confined himself on the guitar which gave birth, in great measure, to the fantastic character of his performances.”

That’s Isaak’s guitar, too, and Fraz­er’s singing. She’s drifting up and down the same corridor again and again, no end to the forgotten lovers’ crimes her footsteps coax out of the floorboards; Isaak makes heart-stopping solos out of a technique that’s not far from tuning-up. At its best, this music feels as if it’s about to vanish.

There’s no melodrama. Isaak buys and sells the stuff, but not on Forev­er Blue. “Changed Your Mind,” “Things Go Wrong,” “Somebody’s Crying,” “Graduation Day,” and “Shad­ows in a Mirror” are so delicate, yet so unstable. It’s as if the singer’s afraid he’s about to lose his sense of loss—the deepest feeling he’s ever had, the one thing that, suddenly, makes life worth holding on to. The feeling can be contagious. Listening to the way every note in “Changed Your Mind” seems locked in a hesitation, you can begin to worry for the sound; to worry that the least mistake will ruin it, strip away the illusion of the sublime the sound is making, and destroy your ability to respond.

There’s a song called “Big O Motel” on Tarnation’s record, but any song on Gentle Creatures or Forever Blue could unfold inside this place. It’s a low-rent version of Heartbreak Hotel, named for the original desk clerk, who, indeed, dressed all in black: the Big O himself, Roy Orbison, dead since 1988. As Frazer sings the song, anything can happen in this dump, and anything will be indistinguishable from nothingness. She floats her lines out in front of herself, as if contemplating the first before she lets a second follow: “By the Big O Motel/There’s a drive-through bar/They’ll make you a daiquiri/In a mason jar/The man at the window/With the receding hair­line/Looks away from me but says/’Same place, same time.'”

Frazer goes for the morbidity that was always at the heart of Orbison’s greatest music—the last chorus of “Crying,” where self-pity becomes oceanic, triumphant, more than love or hate could ever be—while Orbison has always been Isaak’s muse. He and Frazer sing and play, now, like the O’s orphans—obscured by the shadow he left behind, but able to think through what he simply had to do. In Frazer’s “Halfway to Madness,” all the words are buried, and the melody seems to be unraveling. You listen hard, to keep the sweetness of the melody intact, and a few words might make themselves felt: “I listen to a voice of reason/While I sleep/It tells me to question/All the promises that I keep.” The violence that lies just outside of those lines—outside of the restraint both Isaak and Frazer insist on—could be unlimited. As with the instrumental breaks in “Shadows in a Mirror” and “Changed Your Mind,” the music on Gentle Creatures is usually so slowed that anything resembling a progressive beat can be a shock: What’s this for?

What it’s for, it seems, is the release of a rhythm, but also the release of emotions that must be hidden even as they’re expressed. “The Hand” is Tarnation’s most unsettling piece, echoing “Ghost Riders in the Sky,” driven by a cowboy-surf guitar, opening with the cathedral-organ sound of Frazer’s opti­gan. The instruments deliver pure pleasure. But Frazer ignores them, even her own, singing at her own speed, dropping words off of their lines, rushing others. The figure who emerges is distracted, someone who doesn’t walk streets but who’s blown down them by winds of disdain. These hard lines come fast, strong but afraid of the sound of their own voice: “When I felt the hand upon me/I thought I’d shaken all that I could feel/I don’t need someone to tell me/That none of it was real.”

It’s too bad Roderick Usher laid his living sister in her tomb, only to see her rise up days later and bring them both to a simultaneous orgasm of death. They’d make a great opening act for Frazer and Isaak’s fated double bill—at the end, they all harmonize on “Changed Your Mind,” Usher and Isaak trade guitar solos, and everyone comes back to life. But that’s not the direction Frazer and Isaak take on Forever Blue and Gentle Creatures; that’s not how these records end.