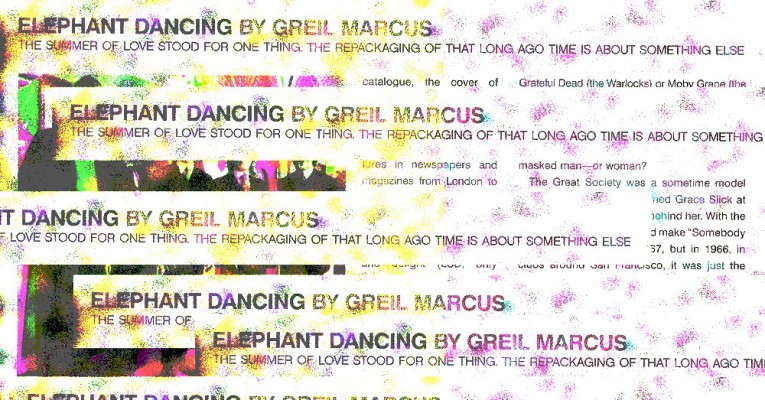 It’s common knowledge that age isn’t what it used to be: Forty is the new 30, and 60 is the new 50. Is this because people are healthier than they used to be or a hysterical attempt to beat the reaper?

The corollary is the telescoping of media anniversaries. The hysteria is the same—fear that time is running out, that if a certain new-50 demographic waits too long for the chance to celebrate its history, or inflict it on everyone else, it will disappear—but the order is reversed. For 2007, 40 is the new 50.

Forty is traditionally a nothing year for anniversaries. You may look blankly at a couple that’s marking a 40th anniversary, but you know you don’t have to celebrate anything. The media looks at 2007 and, lo and behold, 1967 is—at least until the page turns—the most important year in history. My God, you weren’t there? You don’t remember the day the Beatles’ Sgt. Pepper came out? The Six-Day War? (The thumb-sucking op-ed pieces on what Israel should have done instead of what it did to threaten to make hindsight the new history.) The first Doors album? The Monterey Pop Festival? And—most ludicrously—the Summer of Love?

The Whitney Museum of American Art in New York City has opened its major “Summer of Love: Art of the Psychedelic Era” retrospective, on view through September 16 with a huge catalogue, the cover of which spells out the magic words in a psychedelically unreadable design. There are “Summer of Love” features in newspapers and magazines from London to San Francisco and back again. What happened when the New World of transcendence (there was a war on) and delight (LSD, only recently banned, was the new bathtub gin) heaved into view and thousands made the pilgrimage west? San Francisco mayor Gavin Newsom is not, so far as I know, planning to re-create those unforgettable days when police attacked crowds of runaways, curiosity-seekers, and hustlers gathering in the Haight-Ashbury district to dance in the streets, buy drugs, get raped and robbed, and hear wonderful music at the Fillmore and the Avalon and the Panhandle—but who needs it when you can listen to Rhino’s new four-CD box set Love Is the Song We Sing: San Francisco Nuggets instead? It’s not as good as what you’d get with a four-CD set from 1977 called The Summer of Hate, but it is fascinatingly odd.

Love Is the Song We Sing brings the whole hoary myth of San Francisco as the last American utopia down to earth. The 77 tracks collected here, recorded between 1965 and 1970, reduce the San Francisco Sound—in the hands of a few, a glorious explosion of musical risk, experiment, discovery, and glamour—to a bunch of local bands making crummy singles. Weak vocals! Rickety rhythms! Bad sound! Hipster posing! I mean, having lived my entire life in the Bay Area, I was there, and a lot of the stuff here I never heard. There are bands here I’ve never heard of—and for good reason.

So you listen to the morass of ordinariness, of cheap ambition and craven trend-jumping that makes up Love Is the Song We Sing—it’s embarrassing to keep typing the phrase—and what’s so strange is how, in the no-place of the Loading Zone or the Otherside, or the outskirts-of-town early lineups of such once fabled names as the Grateful Dead (the Warlocks) or Moby Grape (the Frantics), a new world truly does come into view.It’s the briefest glimpse, and then it vanishes. It’s so anomalous, and so strong, it can seem like an illusion. Did I hear that? Who was that masked man—or woman?

The Great Society was a sometime model and full-time bohemian named Grace Slick at the mic and a daring band behind her. With the Jefferson Airplane she would make “Somebody to Love” a huge hit in 1967, but in 1966, in clubs around San Francisco, it was just the Great Society’s big number. You get it here live: a fearsome, frightening challenge. There’s a fierce rhythmic count the band uses to step up the tension, and Slick comes off it every time more outraged, disgusted, contemptuous of anyone who doesn’t have the courage to face the truth, throw away the past, take the first steps into a new life. It’s staggering: You’ve walked into this dodgy little place called the Matrix and here’s this good-looking person on the stage all but threatening you with a spiritual death penalty—and turning you into a jury that convicts yourself.

The Charlatans were an old-timey band—they made rock ‘n’ roll out of ancient blues and country songs. They dressed like riverboat gamblers. In “Alabama Bound,” taken from a Lead Belly number, they offered an epic of escape, of leaving it all behind, of striking out for unknown territory. In the sweep they gave the tune—the haunted, doomed, faraway feel of the whole crew seemingly mouthing every word—they enacted the California gold rush itself, not as an event that happened but as an idea. As the song played, it was an event yet to happen, an event that, as you glimpsed it in some future—maybe tomorrow!—seemed most of all to recede into the past: a past of blown chances and lost nerve.

As with “Somebody to Love,” it’s the terror of utopia. Yes, it was 40 years ago, and you can hear it now: Twenty was the new life, or the new death.