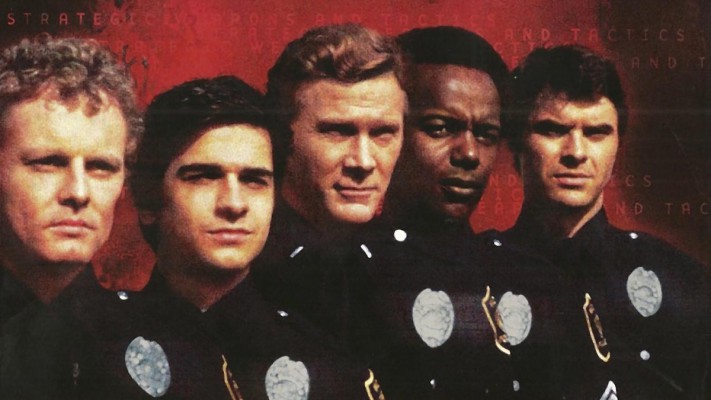 The premiere of Khan!, our latest local crime series. The first installment was titled “Masters of Deceit,” which I assume refers to those responsible for this absurdity.

The premiere Archer, a white, Los Angeles version of Khan!, based on all those good Ross MacDonald mysteries. Yet another dumb plot more or less about the SLA (and that really is great TV material—for someone) that ends with Archer winning out not through brains, or stamina, or even luck, but by technological superiority, which is about as far from Ross MacDonald’s idea of how things work as you can get.

Speaking of the SLA, as did every TV news show during the first week of February, Ch. 5 anchorman Stan Bohrman came up with an interesting point during the Marilyn, Patty & the SLA special: there was a television set inside the house where the final shootout took place, which means that if they wanted to, the SLA could have watched themselves die live on the air.

Marilyn Baker also chimed in with a new low in sexism, opining that the obvious reason P. Hearst “converted” was true love with Willie Wolfe, alias “Cujo” (sounds like a new series about a private eye working the Mission). It’s nice to know that SLA or no SLA, women (at least nice ones) still do whatever their men want.

Colombo missed a great bet with “Troubled Waters,” the segment about C’s big vacation (his wife won a cruise to Mazatlan in a Holy Names raffle, in case you thought he was turning into a big spender). Since his wife was along for the ride, I hoped the director and writer would let us get a glimpse of her (hero TV critic Marvin Kitman of Newsday once wrote a whole column based on all the hints dropped throughout the series as to what Mrs. Colombo wore, ate, did, didn’t do, liked, hated, etc., and came up with something resembling the bride of Frankenstein), but instead, this really suspenseful possibility was ignored in favor of C’s trapping of Robert Vaughn, who played his usual slimy murderer. Maybe next year. Maybe better luck next week.

Wednesday, Feb. 19
—8:30 p.m., Ch. 5: Maurice Sendak’s Really Rosie Starring the Nutshell Kids. Characters by the great children’s artist Sendak, music by Carole King. A can’t miss—but why are kids’ shows on so late?
—11:30 p.m. Ch. 2: The Untouchables—“The Bugs Moran Story.” In spite of the fact that Robert Stack has a repertoire of one expression, this is the best crime show on the local air. The plots are not contrived, the direction is fast, clean and atmospheric, and great attention is paid to period detail. Minor characters are brought out—they are, really, the stars, with Eliot Ness and his boys merely props. Richard Conte was excellent lately, as was Rip Torn as hired killer Pittsburgh Phil. “The Bugs Moran Story” is one of the best the series has to offer.

Friday, Feb. 21
—10 p.m., Ch. 7: The Lily Tomlin Show. Tomlin’s first special, which co-starred the fine Alan Alda, was one of the funniest and toughest comedy hours TV has ever produced. This time the guest slots are filled by Richard Dreyfuss (Duddy Kravitz), Frank Blair, an L.A. disc jockey, and a dog. Hope the show isn’t.

Monday, Feb. 24
—9 p.m., Ch. 7: S.W.A.T. (Pre­miere). Yet another cop show, which takes us “into an area of law enforcement about which little is known.” S.W.A.T. means Special Weapons and Tactics, and features Steve For­rest as the team leader who specializes in drilling into live teeth; Robert Ulrich as a socially conscious officer who believes that “sometimes you have to destroy the people to save them,” Rod Perry as “Deacon” Kay, an ex-divinity student who goes through a spiritual identity crisis every time he enters area of law enforcement about which little is known; James Coleman as a former college athlete who uses his bare hands; and Mark Shera as a former slum-dweller whose life-long ambition is to make enough money on the force to go back to his old neighborhood and become a slumlord. Very promising.
—10 p.m., Ch. 7: Caribe. Stacey Keach stars as Ben Logan, head of the Caribbean Force, which stomps crime throughout the West Indies. Now, if the producers have some nerve, we’ll see good stuff on Meyer Lansky, Bebe Rebozo, RMN, and the Mary Tyler Paint Co., which runs gambling throughout the Bahamas. If they don’t, we’ll see shows about Caribbean militants kidnapping rich white tourists. We’re not taking bets.

Tuesday, Feb. 25
—8:30 p.m., Ch. 5: M*A*S*H: The whole outfit gets ready for a visit from Supreme Commander General Doug­las MacArthur. Harry Truman calls him home first, though, and everything goes back to normal. Should be a good show.

Thursday, Feb. 27
—8 p.m., Ch. 5: The Waltons—­”The Woman.” Uh oh. John-Boy falls in love with a woman writer, based on Dorothy Parker, who’s at his college to give a few lectures, but instead gives John-Boy a few lessons about “what it means to be a man.” All of which, of course, are passed on to you.

Sunday, March 2
—8 p.m., Ch. 2: Warriors vs. Portland (Delayed). Last series between Our Boys and Theirs was messy but very close. Keep your eye on Sidney Wicks and Geoff Petrie of the Blazers.

Thursday, Feb. 20
—11:30 p.m., Ch. 44: The Searchers (’56—Dir. John Ford). John Wayne as a Texan, home from the Civil War to find his brother and sister-in-law killed by Comanches and his niece kidnapped. He sets out to find her, and five years later, he does. One of Ford’s greatest.

Wednesday, Feb. 26
—11:30 p.m., Ch. 44: All Through the Night (’42). A wildly entertaining spy thriller, split evenly between comedy and suspense, star­ring Humphrey Bogart as a gangster out to find the killer of a friend and busting up a gang of Nazis at the same time. Great finale.

Friday, Feb. 28
—10 a.m., Ch. 2: Manhunt (’42). George Sanders and Walter Pidgeon in another spy oddity, this time about a big-game hunter who decides he wants Hitler’s head on his wall. No kidding.
—11:30 p.m., Ch. 44: Passage to Marseilles. Bogart, Lorre, Greenstreet and Claude Rains (sound familiar?) in a pretty fair flicker about escapees from Devil’s Island out to join the Free French. Soppy ending, but good as long as it stays on the ocean.
—1:30 a.m. (Wed. morn.), Ch. 5: Crack Up (’46). Pat O’Brien, Claire Trevor, and Herbert Marshall in a mystery involving a museum curator with amnesia, art forgeries, and Peter Lorre as a drooling maniac. Sounds neat.