To review Went Like it Came, the—what? hippie talk and variety show?—that screened on Channel 2 a short time ago, after several months in the sandlot leagues of Cablevision, would be like letting someone hang themself with their own rope, but what the hell.

More than anything else, WLIC reminded me of a short that’s been playing in local movie houses for years, called Replay. It starts out with a braless woman setting a bird free—in slow, joyous motion—then cuts in a lot of man-on-the-street comment from over-forties about how degenerate the youth of today are getting (with clips showing how degenerate the over-forties were when they were the youth of yesterday), shows us a hippie acting rudely, and the dumb old people who don’t think he’s the second coming of Christ, and so on. The film is a commercial for Arrow shirts.

WLIC has the same glossy emptiness. Bonnie Raitt was magnificent, and a clip from Hearts & Minds was interesting, but sandwiched in between were astrology, the Persuasions, lots of arty-psychedelic montages, Scoop Nisker (he was fine), commercials that were indistinguishable from the rest of the show, Arlo Guthrie, Wavy Gravy, dope cartoon, et cetera upon et cetera. About all of Raitt and the anti-war movie you could retain in your mind was a vague sense that they, like all the other things, were hip. Their specificity dissolved.

For all that, I must pass along a couple of timeless moments that surely ought to be preserved in the annals of this magazine as classic examples of ’70s hipspeak. First, co-host Rona Begonia: “I’m going to introduce the next guest by saying he’s someone very special in my universe, who gave me the opportunity to transform my life.” Vic Tanney? No, est-man Werner Erhard, who came on very much at ease, all small-time charisma. It’s not easy to capture doubletalk on a single hearing, but the riff I liked best had enough logic in it for me to get it down. Erhard: “I was scared to death when I developed est that I was on an ego trip, but I realized the ultimate ego trip was to think you could ever be on anything but an ego trip. So I took responsibility for my own ego.”

Inspired, I raised myself from a cowardly prone position, took responsibility for my TV set, and turned it off.

However, WLIC was a work of profound human sensitivity compared to a couple of shots I caught while twisting the dial during the graveyard of our local channels, which is to say, after the news, and before the network comedies and dramas. The New Treasure Hunt featured a woman who “picks the box” and opens it to find a huge stuffed frog. Obviously, she’s disappointed, so the host tells her to kiss the frog. After a lot of pushing she does, and it “turns into” a Prince, who comes bumping down the stairs with another box. He announces, in a horrible Cockney accent (a Cockney prince?) that she’s “won a Rolls-Royce.”

Now, the audience, both in the studio and in televisionland, knows that this tacky show is not giving anybody a Rolls-Royce, but the woman up on stage is so excited and scared that she doesn’t think straight, which is just what the show’s producers want.

She goes mad with joy, jumping up and down, hugging the host, the whole routine. “Oh,” says the host, after she steps back, beside herself. “Did you think you won a Rolls-Royce car?” Her face begins to fall; it’s not fun to see. “I guess it was that Cockney accent,” smirks the host. “You won—rolls and rice!” And he pulls out about a buck and a half worth of brown-and­-serve and a box of Uncle Ben. The woman about dropped dead. The audience went wild. It was the most sadistic thing I’ve ever seen on TV.

Close to topping that, though, was Alan Funt on his New Candid Camera. He’s interviewing a little black girl, about seven, on the subject of “Worries.” The girl is warm, smart, and utterly guileless.

“What do you worry about?” says Funt.
“Nothing,” says the girl. “I’m very happy.”
“What do adults worry about?”
“They worry about prices going up, and what they’re gonna do about it.”
“Don’t you worry about not doing your homework, or being late for school?”
“No, because I always do my homework, and I’m never late for school.” And she smiles a smile that could melt ice in Greenland. Funt looks pissed; he’s gonna get her if he has to beat her up and ask her if she doesn’t worry about strange men coming along and beating her up.
“Don’t you worry about not getting something for Christmas, honey?”
“No,” says the girl, looking straight at him, trying to make this odd man understand what she’s about. “No, ’cause my momma ain’t got no money, and I’m just glad to have her.” Well, the audience howled, and Funt was back in the studio, fielding the laughs. “Ain’t got no,” said those laughs—and she says she always does her homework! What do you say about someone who puts such a wonderful girl on television and then does his best to humiliate her?

Friday, March 21
—9 PM, Ch. 5: Supercops. A pilot for a new series. You don’t think this might have something to do with S.W.A.T., do you? Maybe if this show goes on regularly, S.W.A.T. and the Supercops can face off and kick each other all over the screen. In a police athletic league touch football game, of course.
—10 PM, Ch. 7: Close-up on the IRS. The IRS has police powers, and they like to use ’em. Brit Hume, who works for Jack Anderson, is our guide through this labyrinth of horror. Not for the kids.

Saturday, March 22
—6 PM, Ch. 9: Book Beat. Bob Greene, author of Billion Dollar Baby, a superb account of Alice Cooper on the road, will be talking about it. From the evidence of the book, Greene has a lot of humor and more horse sense. If you have the slightest interest in journalism, watch.

Monday, March 24
—10:30 AM, Ch. 44. Not For Women Only. Julie Eisenhower will be running the show this week, digging deep into “The Private Life of Public People.” All your favorites, fans: Barry Goldwater, Jr., Mrs. Norman Vincent Peale… 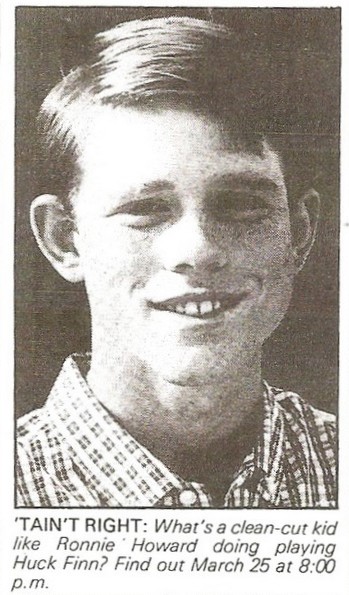 Tuesday, March 25
—8 PM, Ch. 7: Huckleberry Finn. You loved Ronnie Howard as the clean-cut Senior Class President in American Graffiti; you’ve tolerated him in Happy Days; get ready to hate him as he helps reduce Mark Twain’s classic to an all-time low in creeping meatballism. Co-starring Merle Hag­gard. As who, Nigger Jim?

Sunday, March 30
—9 PM, Ch. 5: Sojourner. Her last name was Truth, and that gave this woman a name almost impossible to live up to, but she did. A former slave, she became a great abolitionist and a founding feminist. Vinette Carrol stars. 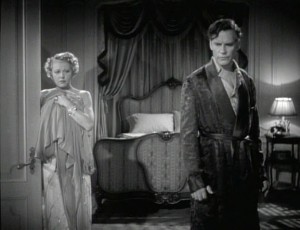 Friday, March 21
—11:30 PM, Ch. 20: This is such a terrible two weeks for TV that I’m going to mention Channel 20’s Worst of Hollywood series, about which they are not kidding. Tonight’s offering stars Bela Lugosi in The Return of Chandu. We don’t know what it’s about, who else is in it, when it was made, or where Chandu returns from, and anyone who wants to watch it can write and tell us the answers to all those questions and we’ll print them.
—11:30 PM, Ch. 44: On the other hand, you might prefer The File on Thelma Jordan (’49, Dir. Robt. Sidomak), a murder mystery with Barbara Stanwyck and Wendell Corey. The plot’s too complex to summarize but if you’ve ever seen Sidomak’s version of The Killers you’ll want to check this out.
—1:30 AM (Sat. morn.), Ch. 44: Days of Glory (’44). Here’s an interesting curio, made by various left-leaning Hollywood people, all about the brave salt-of-the-earth Rus­sians fighting for their lives against the blood-sucking Nazis. Gregory Peck co-stars with Tamara Tournanova. Everybody involved was very proud of this film, so much so that five years later most of them showed up before the House Committee on Un-American Activities to answer all sorts of interesting questions about it.

Saturday, March 22
—8 PM, Ch. 7: The Battle of Britain (’69). Michael Caine, Lord Sir Olivier, Christopher Plummer & Robert Shaw in a truly—can we still use this word?—stirring account of Hitler’s 1940 blitzkrieg. All that’s missing is Richard Burton doing his Winston Churchill imitation, but you won’t even miss it.

Sunday, March 23
—7 PM, Ch. 44: The Big Sleep (’46, Dir. Howard Hawks). Along with The Maltese Falcon, the greatest private detective movie ever made. Scene after scene sticks in the mind—Bogart with General Sternwood in the hothouse, Bogart with Dorothy Malone in the bookstore, Bogart listening to Elisha Cook, Jr. guzzle a glass that he knows is full of poison, and more. With Lauren Bacall, and Martha Vickers as the thumb-sucker who loves men, booze, dope, and death, not necessarily in that order.

Monday, March 31
—11:30 PM, Ch. 44: Dodsworth (’36, Dir. William Wyler). A very fine picture, starring Walter Huston and Mary Astor caught in the classic trap of honest, straightforward Americans vs. slimy, decadent Europeans. Not as good as Ruggles of Red Gap—a sort of reversal of the same story—but worth seeing any day of the week.

Tuesday, April 1
—11:30 PM, Ch. 44: The Men (’50, Dir. Fred Zinneman). Brando, in his first picture, as the paralyzed war vet trying to come to grips with himself. With Everett Sloane, Teresa Wright, Jack Webb. Brando gained his initial recognition with the stage version of this story; then he went to Hollywood and, as it was said in those days, “sold out.” Thank God.