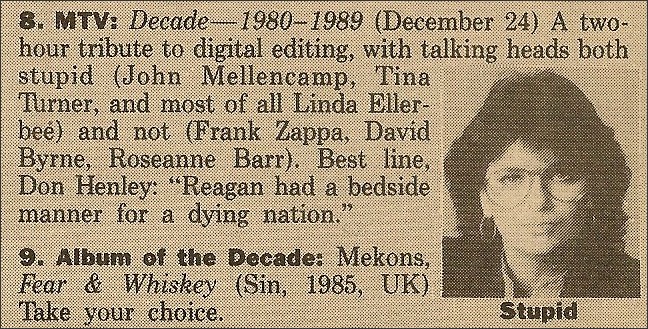 1. Alison Krauss and the Union Station: “Two Highways,” from Two Highways (Rounder)
A shining bluegrass tune, moving fast, but seemingly coming very slowly, maybe because of the lifetimes in Alison Krauss’s young voice. “Only time will tell if I have made a loser’s choice”–there’s a memory of a road Dolly Parton might have taken, but no mannerisms or borrowings are audible. This is a song where even bad lines are suggestive: “Will I hear the melody I searched for oh so long,” Krauss sings. If this isn’t it, what is?

2. Carl Hiassen: Double Whammy (Warner Books, $4.95)
Inside this terrific mystery about bass fishing is a tiny novel–not screaming to get out, but happy right where it is. Sometime in the ’70s a reformist governor of Florida subverted on all sides by developers’ money quits, disappears, and turns up years later as a swamp rat known as Skink. He’s a saint but he doesn’t talk like one: speeding down the road in a villain’s top-down Corvette he rips Whitney Houston out of the tape deck, throws it in the air, and growls, “Got any Creedence?”

3. Little Richard: The Specialty Sessions (Ace/Specialty reissue, 1955-64, UK)
Given Richard’s nearly monolithic attack, this is nowhere near so playable as boxes devoted to Jerry Lee Lewis or Buddy Holly; the remastering is often scholastic, bringing up the voice and losing the sound. But halfway into the eight LPs or six CDs a story emerges: songs carried over from session to session, months between attempts to get it right, a saga of a refusal to settle for anything less than a division of history: the division, say, between the first take of “I Got It,” and the ninth.

4. Steve Propes, et al: liner notes to Los Angeles reissues on Mr.R&B’s labels, Sweden (Jaguars, The Way You Look Tonight, 1955-61, Earth Angel; Hollywood Flames, The John Dolphin Sessions, 1951-56, Earth Angel, and Jimmy Wright, Let’s Go Crazy, 1953-56, Saxophonographic)
The music is not great; the tale it tells, of the hustle and miscegenation of early L.A. rock, is. The notes to the LP by the Jaguars (two blacks, an Italian, a Chicano–their “Charlene” was redone by Los Lobos on the La Bamba soundtrack), trace a line that began with backing on a worthless Walt Disney-Davy Crockett-craze number and ended in failure: a line that connects Buddy Ebsen to Richard Berry to the Lettermen to the Penguins to David Lee Roth.

5. Georgia Satellites: “It’s All Over But the Cryin’,” from In the Land of Salvation and Sin (Elektra)
In the vein of Lynyrd Skynyrd’s Street Survivors, and good enough to be on it.

6. Dave Marsh: The Heart of Rock & Soul (Plume, $14.95)
A close reading of 1,001 singles, Scheherazade at the jukebox–the longest book of rock criticism ever published, one that every reader will rewrite, and far and away my friend’s top work. As a skeptic about punk, his entries on the Sex Pistols are profound; as a fan who finds the high point of rock in the mid-’60s he offers a double-slap in the face that has Chuck Berry on one cheek and Sgt. Pepper on the other.

7. Bob Black: “On the Art Strike” (Artpaper, December)
Black takes bad ideas seriously. “On January 1, 1990–if they comply with the directives of the PRAXIS group–all artists will put down their tools for three years,” he begins. Then he imagines the result of this “ostentatious renunciation,” promoted as utopia where “plebian masses, no longer cowed by ‘talented bullies,’ are in turn expected to rush into art like fresh air into a vacuum”: “Not, as is pretended, the general strike of the proletariat, but rather something already depicted in a work of art–the general strike of the capitalists in Ayn Rand’s Atlas Shrugged.”

8. MTV: Decade–1980-1989 (December 24)
A two-hour tribute to digital editing, with talking heads both stupid (John Mellencamp, Tina Turner, and most of all Linda Ellerbee) and not (Frank Zappa, David Byrne, Roseanne Barr). Best line, Don Henley: “Reagan had a bedside manner for a dying nation.”