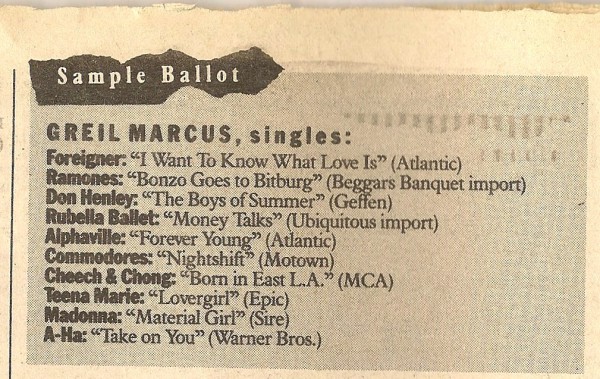 As un-years go this wasn’t bad. The big events–Bruce as will and idea, “We Are the World”/Live Aid/Farm Aid/Sun City, the PMRC–didn’t much reach me, or did so only negatively. I think Michael Jackson and the Victory tour still cast a pall over the period. I liked, admired, and listened to the favored rising-up undergrounders–Hüsker Dü, Replacements, Minutemen–without being obsessed by any of them. Like everyone else in the country, I had fun with the Roxanne records, thought Shanté was tops, cracked up over Doug E. Fresh, favored Double Dee & Steinski and Fats Comet, but for me, they were just passing through. I found myself caught up with ubiquitous stuff like “I Want to Know What Love Is,” Mellencamp, “The Boys of Summer,” a-ha–and also crankish, irritated, melancholy, no-future, sentimental refusals like Rubella Ballet, the Mekons, the Clash. I was warmed, really, only by the distant past: Sam Cooke, Nolan Strong, Syd Straw’s “Listening to Elvis”–unheard music from a time one might have thought was already catalogued and filed. It isn’t, and probably this time isn’t either, even though it seems to file itself. Prediction: nothing new will connect (lots new is “happening”) until both Thatcher and Reagan are gone. I don’t know about Thatcher, but I do know that Reagan’s domination of American (and by extension, Western) cultural life is so complete that his exit will inevitably bring about a cultural vacuum–a crisis of moods, images, and values so intense it will force new and conflicting music to a surface cleared for new conflicts. It ought to be worth waiting for. I hope so; I’ve been holding my breath since November 1980.
Greil Marcus
Berkeley