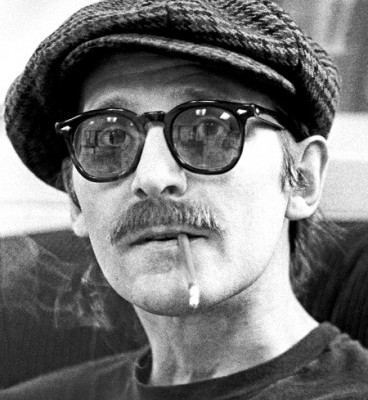 Sometime in the early 1970s, I visited Paul Nelson’s apartment in New York–on Lexington Avenue, I think. I’d seen Paul often in the years before, but this was the first time I’d seen him without a cap, when I found out that underneath that cap, he was completely bald. In his own house, he could be himself.

Paul was a serious book collector: a maven, a fetishist. His shelves were filled with endless editions of 1940s and 1950s hard-boiled detective fiction. First editions in perfect condition; battered paperbacks with lurid covers. Placed here and there were books on stands, as artworks. They were there to be stared at, to fall into, to reflect back, like mirrors. He handed me Five Sinister Characters, a 1945 paperback collection of Raymond Chandler stories: “Trouble Is My Business,” “Red Wind,” “I’ll Be Waiting.” On the cover were pictures of a rich woman in a heavy necklace, a mean-looking cad in a pencil moustache, an officer from the time of the first world war, a Chinese thug, and a woman in a veiled hat—a woman who was clearly a man. The crude portraits were like a scrim over the writing inside, teasing you that, as you read, you’d be able to tell who was who, when the whole point was that you wouldn’t.

Paul was a humble, generous man with the driest sense of humor imaginable, all in the way he dropped an eyebrow; you knew you weren’t seeing a fraction of what was there. The apartment was an airy, pleasant place, but it was also a cave. “P.N. has a Phone-Mate automatic answering machine, which he leaves on twenty-four hours a day, to screen out all calls he does not want,” Paul’s close friend and collaborator Lester Bangs wrote about that time in a set of notes for a book he planned, All My Friends Are Hermits—in those days, you still had to explain what an answering machine was. “Sometimes, after I hear the beep and say who it is, he immediately picks up. Often he does not. Sometimes the latter option obtains for weeks.” Paul hid from his own writing. In 1974, when Jim Miller and I were trying to get the chapters Paul had promised for The Rolling Stone Illustrated History of Rock & Roll out of him—on Bob Dylan and Rod Stewart, people Paul loved, and who loved him—we left what we thought were funny, then what we hoped were threatening messages on his machine, pushed his buzzer, shouted up from the street, mailed ransom notes (I can’t remember who the hostage was supposed to be). We had no idea if he was in the apartment or not. We fantasized—it’s a commonplace, banal fantasy, everyone’s had it—that he was in there dead, not to be found until the neighbors couldn’t ignore the smell. We gave up, and began looking for other writers.

Finally the pieces came. The one on Dylan was a detective story. Paul was the Op; culture was his beat. His clients (from “the Manhattan Institute of Critical Enterprise” and “the Majorities Enter the War League”) were looking for a hero to promote, and thought Dylan might still do the job.

“In the mid-sixties Dylan’s talent evoked such an intense degree of personal participation from both his admirers and detractors that he could not be permitted so much as a random action,” the detective explained. “Hungry for a sign, the world used to follow him around, just waiting for him to drop a cigarette butt. When he did they’d sift through the remains, looking for significance. The scary part is they’d find it—and it really would be significant.”

“Mystical mumbo jumbo,” one of the clients said; it was a whole career in seventy-five words. They took Paul weeks to write, and over the last thirty years they’ve bounced back again and again and again. A lot of writers live their lives without ever getting anything quite so right, in words that would come to no one else.

CityPages, July 12, 2006 (with additional pieces on Nelson by Dave Marsh and Tony Glover)