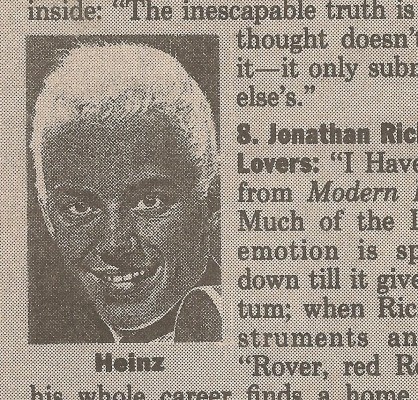 1. James Burton & Bruce Springsteen, “Oh Pretty Woman,” from Roy Orbison and Friends: An Evening in Black and White (Cinemax, or MTV clip)
What you don’t get anymore: two guitarists trading a riff, making it into a phrase, and then, taking all the time in the world, writing a book. The moment was so invisibly sustained, suspended, even out of the time of the song, that when MTV followed with Pink Floyd’s “On the Turning Away,” and David Gilmour stood still and played an endless, stately, perfectly generic late-’60s cosmic solo, even that sounded inspired.

2. Terence Trent D’Arby, “Wonderful World” (Columbia 12-inch)
There are only three kinds of rock fans: those who think Sam Cooke’s “A Change is Gonna Come” is better than his “Wonderful World,” those who think the opposite, and those who can’t decide. D’Arby must fall in the latter camp. The complexity of his own music can be traced back to the consciousness of “Change,” but so far that complexity exposes too much self-consciousness–“Wishing Well,” the A-side of this disc, dies when you start hearing how many times he had to rehearse his laughter. The easy melody of “Wonderful World” gives D’Arby a chance to be a soul singer, not just a genius. When he covers the verse left off of Cooke’s hit version, “Don’t know much about the Middle Ages/Look at the pictures I just turn the pages,” he lets you see him squirming at his schoolroom desk, confused, wishing he did know about the Middle Ages–which, off the record, D’Arby surely does.

4. Peter Sloterdijk, “Dada Chaotology,” from Critique of Cynical Reason (Minnesota Paperback)
“A subterranean line leads through the culture of hatred in our century–from Dada to the punk movement,” says the 40-year-old author of this hit West German study of “enlightened false consciousness” (what’s left when revolutionary consciousness goes to sleep). Dada/punk is an old argument, but it has force here. That’s because, working with documents previous innocent of English translation, Sloterdijk is talking about Berlin dada, less an art movement than a free speech movement–an explosion of spleen that produced a language so cruel and self-contradictory (“We were for the war and today Dadaism is still for war,” draft-dodger Richard Huelsenbeck announced in early 1918) it burned off all irony, leaving behind nothing but words that dared the listener to believe they meant what they said. Sloterdijk is one of the first to try.

6. John Crawford, Baboon Dooley–Rock Critic! (Popular Reality Press, P.O. Box 3402, Ann Arbor, MI 48106, $9.95 postpaid)
First full-length book on the subject–even if it is all comic strips, even if the highlight is the flashback “Witness to Beatnik Glory.”

7. Swellsville: A Critical Guide for Consumer Deviants (Winter of Our Discontent 1988 issue, c/o Jack Thompson, P.O. Box 85334, Seattle, WA 98145, $1)
Fanzine with ’60s UK would-be teen idol Heinz on the cover (I never heard of him either) and lots of words inside: “The inescapable truth is that avoiding critical thought doesn’t dispel the need for it–it only submits you to somebody else’s.”

8. Jonathan Richman and the Modern Lovers, “I Have Come Out to Play,” from Modern Lovers 88 (Rounder)
Much of the LP is vague, but the emotion is specific here, chased down till it gives up its own momentum; when Richman muffles the instruments and breaks out with “Rover, red Rover, come on over,” his whole career finds a home in the line.

10. Joni Mabe, “Love Letter to Elvis” (Primitivo gallery, San Francisco)
The show was called Elvis the King, a Folk Hero; amidst Howard Finster’s suspect tributes and a Rock Dreams ripofff, Mabe’s collages stood out. In this giant handwritten valentine, you couldn’t tell the dementia from the parody (if there was any)–reading along with “You could have discovered that sex and religion could be brought together in your feelings for me,” pulled up short by the closing “confession”: “I’m carrying your child. The last Elvis imitator I fucked was carrying your sacred seed. Please send money. Enclosed are photographs of myself and the earthly messenger you sent.” That was an ugly ceramic Elvis doll; all around the letter, snapshots show Mabe rubbing her bare breasts against it, grinning.