In the course of publishing American Pastoral in 1997, I Married a Communist in 1998, and The Human Stain last year–winning the Pulitzer Prize in fiction for American Pastoral and receiving the National Medal of Arts at the White House in 1998–Philip Roth must have gotten really sick of reading about what a sage he’d become: “master chronicler of the American twentieth century,” poet of “America’s promise of radical individualism,” drafter of “a patriotic literary project that has no match in any contemporary field,” as Rachel M. Brownstein of Commonweal, M.A. Bernstein of the Times Literary Supplement, and I put it on various occasions. In three profoundly ambitious novels, all narrated by his longtime literary foil Nathan Zuckerman–now in his sixties, impotent and incontinent from surgery for prostate cancer, turned altogether contemplative and deeply interrogative of both the great events of his era and his own connection to them–Roth dramatized upheavals of postwar American life in a signal way: the Red Scare of the late ’40s and early ’50s, the antiwar movement of the ’60s, and the Clinton impeachment of 1998 and 1999. He created unique, perverse, flawed characters–male and female–and set them loose in their times, where they were destroyed. “And I only am escaped alone to tell thee,” Zuckerman almost says as the last of the three books ends.

By following his “American Trilogy,” as his publisher calls it, with a new chapter in the story of David Kepesh, the novelist who once compared himself to Tiny Tim has ensured that, at sixty-eight, he no more than Bill Clinton will be allowed to go quietly into that good night. Appearing first in 1972 in The Breast–a comic, convincing first-person account of how “a massive hormonal influx” turned a thirty-eight-year-old New York English professor into a six-foot-long, 155-pound “mammary gland disconnected from any human form”–and then again in 1977 in the humorless prequel The Professor of Desire, which traced his sexual initiation, disastrous marriage, divorce, breakdown, and rescue by a beautiful young woman whom, at book’s end, he no longer wants, Kepesh is a monster of vanity: an irredeemable shit. If the impotent Zuckerman has become a figure of nearly transcendent decency–a man of doubt, compassion, empathy, and limits–Kepesh cares only for himself. As he tells others’ stories, Zuckerman’s language is direct, forceful, full of respect both for the story and those suffering it; as he tells his own story, Kepesh’s language is crass (“They come to my first class, and I know almost immediately which is the girl for me”). In The Human Stain, sex between the seventy-two-year-old professor Coleman Silk and the thirty-four-year-old janitor Faunia Farley is sexy–as play, self-discovery, self-acceptance, defiance, mastery without submission, surrender without domination, mystery; as the reader follows Kepesh from young to old, sex is cold, mechanical, and self-reflecting, with the stakes being the humiliation of self or other. The greater world clears a field for the heroes of the books that Zuckerman narrates, then turns the field into a trap; for Kepesh the greater world doesn’t exist, except in the form of newfangled irritations like sexual-harassment cops: “those in the university who, if they could, would seriously impede my enjoyment of life.” 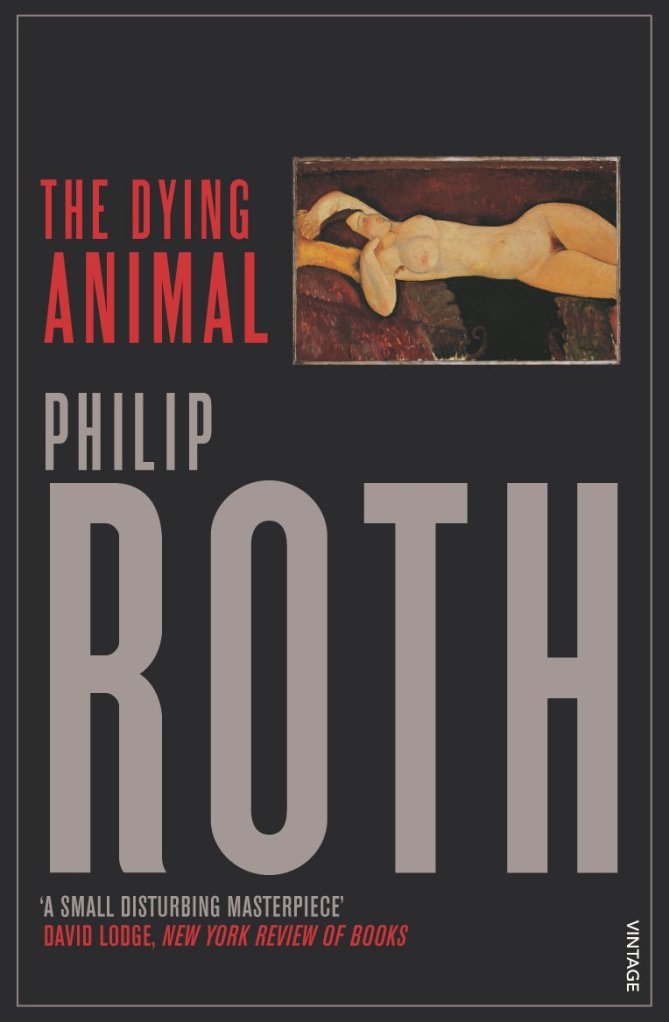 The Dying Animal is his tale of the one student he fucked whom he had the hardest time getting over. Kepesh is looking back eight years, to when he was sixty-two, a minor celebrity as the book critic on the New York NPR affiliate and culture pundit on local public TV, and twenty-four-year-old Consuela Castillo appeared in the class in “Practical Criticism” that he teaches in order to assure himself a continuing supply of new girls. “You see the cleavage immediately,” he remembers. He describes the first time he saw her naked: “In the first place, the breasts. The most gorgeous breasts I have ever seen–and I was born, remember, in 1930: I have seen quite a few breasts by now. These were round, full, perfect. The type with the nipple like a saucer. Not the nipple like an udder but the big pale rosy-brown nipple that…” Once, a crisis of desire turned Kepesh into a breast; now, finally, he’s found a woman he can turn into a breast. Complete with medical crisis, that’s what happens here, to the point that, in the end, the woman puts no other value on herself

Kepesh, like Nathan Zuckerman or Madame Bovary or Spider-Man, is a literary construct; the idea is not to like him, but to credit his existence for as long as it takes to attend to his adventures. This is not easy. If one is encountering Kepesh for the first time in The Dying Animal he appears so rootless, so entirely consumed by the quest he much too modestly describes as “how to be serious over a lifetime about one’s modest, private pleasures,” that he seems little more than a figment of his own imagination, a connoisseur of his own taste. That impression, fading each time it appears in the face of Kepesh’s donnish, usually amused recounting of a conquest, suddenly comes into awful focus when, as it were, he looks into the mirror, offering the reader a letter from his forty-two-year-old son: “The long white pageboy of important hair, the turkey wattle half hidden behind the fancy foulard–when will you begin to rouge your cheeks, Herr von Aschenbach?” Kepesh will rant against marriage, certain that sex between a man and a woman must run its course in three or four years if there is any health, any intelligence present–yet when he speaks of sex, the reader isn’t brought into the action but pushed away, by Kepesh’s own distance and by his own elevated language.

“This is a generation of astonishing fellators,” he says of a student—who cannot be, like Faunia Farley, a mere cocksucker. Norman Mailer nailed the problem in 1962, in an interview with Paul Krassner, who had just described how a Cuban prostitute stopped “in the middle of fellatio to ask me if I was a Communist.” Mailer answers a question Krassner doesn’t know he’s raised: “Maybe you just should have said, I was having my cock sucked and she said, Are you a Communist? If you’re getting into the brutality of it, get into the brutality of it. Throw a beanball. Don’t use the Latinism. All I know is,” Mailer said, “that there was something bad about it, the effect was shock… like banging your head or taking a dull fall; your wits are deadened.” “Fellators”–this is the prig in Kepesh coming out, the prude, the man who is never lost in sex, never not altogether himself, who can speak of a woman who will not “have intercourse per anum,” making the reader think, “What, not even once a year?” “Fucked her in the ass” and “asshole fucks” denigrated no one in The Human Stain; such words would stain Kepesh.

If one knows Kepesh from The Breast and The Professor of Desire, the character in The Dying Animal is even more of a floater. The Kepesh of The Breast, demanding that his girlfriend Claire let him fuck her with his nipple, demanding the celebrity due the only true breast-man in the whole world, demanding his own stable of groupies (“If Charles Manson can find them, if the Rolling Stones can find them, we can find them”), has, in The Dying Animal, pretty much gotten what he’s always wanted–but there’s no trace of his life as a breast. He has a first marriage in his past–but it bears no resemblance to the marriage Kepesh had in the earlier books–and has produced a son who previously escaped anyone’s notice. It makes sense: Kepesh is so much the fetishist of the idea of his own pleasure that he can suffer no past. That he cannot make sense of the present comes with the territory: The present, in the form of himself inside a new woman, exists only to be savored the next day, and after that–another day, another dollar. At the end of The Professor of Desire, there is an account of what it means to the young Kepesh to teach a class–by far the most passionate pages in any of the Kepesh books. Each detail emerges of its own accord, with its own momentum, the articulate man who is speaking full of the sense of how little of experience words can convey, of how much will be lost if they convey any less than they can. Such detail is the last thing that is generated when Kepesh talks about sex. Beyond his florid description of Consuela Castillo’s breasts, beyond his utter worship of her body, we find out that she’s not very bright and not very good in bed. He tells us he lived in a torment of jealousy during their eighteen-month affair and a torment of abandonment for years after it ended; his time as a breast was infinitely more believable.

This too makes sense. David Kepesh is a diminishing man. With every new class, every new woman, every new thought, every new piano piece he learns, there is less flesh and more role, less desire and more desire for it. There is just enough of a man left to leave you feeling, on the last page, that you might have missed the whole point of Kepesh’s present-day self-portrait as surely as he has.