Alexander Trocchi was a leg­endary figure in his lifetime: “a Viking,” as one who knew him in Paris in the 1950s recalled. He was seen as a man of towering literary genius, fated to cut a swath through the world. The only question was which direction he might choose. In the fifties he kept company with writers as aus­tere as Beckett and with revolutionaries as shadowy as Guy Debord, as well as with hustlers straddling the line between art and crime. In the sixties he announced himself a “cos­monaut of inner space” and positioned himself at the cen­ter of an international combine of the avant-garde, the “underground,” the “new culture”; with real force and pas­sion he called for an “Invisible Insurrection of a Million Minds.” Always—whether in Paris or London, New York or Venice, California—people of all sorts were powerfully drawn to him, to his keening vitality, to the promises of adventure, risk, and victory he seemed to scatter like gifts to those less rich in spirit—like alms to the poor.

But when Trocchi died in London in 1984—he was 59; he died of pneumonia, following an operation the previous year for lung cancer—he left behind a very conventional bohemian legend. He had been a heroin addict for almost thirty years, unrepentant and proud, and all around him was wreckage: his second wife, an addict in his steps, dead young, long before him (reaching the nadir of the bohemian cliché, Trocchi had once sent her out into the streets of Las Vegas to whore for their junk); his eldest son, dead; his youngest son, who would kill himself a few months after his father’s death. Across the map of Trocchi’s life were friends and acolytes who died young or who cultivated their own addictions. And, of course, there was the wreckage of Trocchi’s own writing, almost all behind him by the end of the 1950s: from the pornography published in Paris under the name “Frances Lengel” to the lonely Cain’s Book, an autobiographical novel in the form of a junkie’s journal. Cain’s Book was celebrated upon publication in 1960 in New York, banned and burned in Great Britain in 1963 as likely to corrupt and deprave. That was all. For the next quarter century Trocchi pursued a thousand schemes for a little money, a little notoriety, living off the question of what might have been. In the matrix of the bohemian legend there is nothing so romantic as turning one’s back on the field the moment everyone believes the prize is yours; in that sense, in the sense of rules that were not of his making but for which he settled, Trocchi’s life was a cheap triumph.

Cain’s Book, written over the course of seven years, is not cheap. It is cruel. It is one of those nihilist books that well-meaning readers are always trying to rescue from itself with appeals to sociology, philosophy, art, or revolution. The book provides valuable insights into the nature of a major social problem… Beneath the surface the book affirms the irreducible nature of the human spirit… The book makes a crucial contribution to the literature of addiction… of alien­ation… of rebellion—forget it. You can’t derive socially useful sentiments from lines like “‘She’d suck the fix out of your ass.'” There is no subversive undertow in a solipsistic rant like “… and set their damn police on me who has not stirred from this room for fifteen years except to cop shit…” Cain’s Book insists that life is made of choice and necessity, and then moves relentlessly toward reducing both elements to zero. “Sometimes, at low moments,” says the narrator of Cain’s Book, “I felt my thoughts were the ravings of a man out of his mind to have been placed in history at all, having to act, having to consider; a victim of the fixed insquint. Sometimes I thought: What a long distance history has taken me out of my way! And then I said: Let it go, let it go, let them all go!”

“I have needed drugs,” read a note found among Trocchi’s papers after his death, “to abolish within myself the painful reflection of the schizophrenia of my times, to quench the impulse to get at once onto my feet and go out into the world and live out some convenient, traditional identity of cunning and contriving… The astronauts who were my heroes moved on trajectories of inner space… I wanted to escape out of the prison of my mind’s language; to ‘make it new.'” Against such trite phrases about salvation through art, Cain’s Book is an account of how drastically they fall short. “I’m all the time aware it’s reality and not literature I’m engaged in… At times I am living at the tips of my senses. I am near flesh, blood, hair.” None of this is any good against the enemy that, near the end of the book, finally reveals itself: history, the rebuke of a world that would be no different were you never born, that is not waiting for you to die. “It is as though I have been writing hesitantly, against the tide, with the growing suspicion that what I have written is in some criminal sense against history…”

Such bravado comes off the pages of Cain’s Book as bluster; as a pathetic admission of defeat; as a distant memory of an idea of art as a subjective, solitary annihilation of a world which refuses to recognize the sound of its own ending, the sound the artist makes. Cain’s Book builds directly to this silent explosion; you can hear it going off in the writer’s head. This explosion is art in spite of itself. As you read, it is loud enough to silence the chatter of Trocchi’s merely personal legends. Let them go. 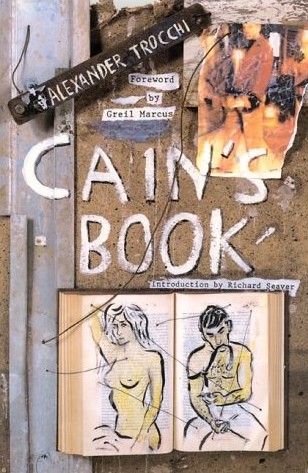