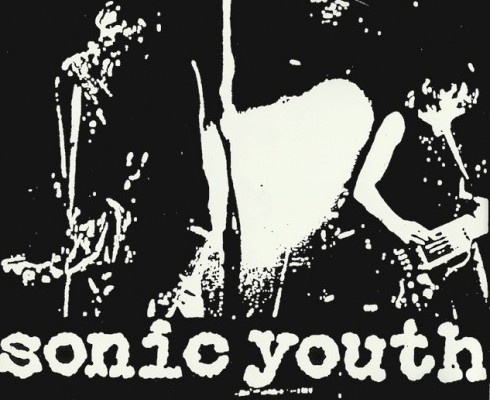 About the time Sonic Youth recorded their version of the Stooges’ “I Wanna Be Your Dog”—in November 1982, onstage at the Pier in Raleigh, North Carolina—bassist and singer Kim Gordon was writing a piece about Glenn Branca. She started off talking about something more basic:

People pay to see others believe in themselves. Many people don’t know whether they can experience the erotic or whether it exists only in commercials; but on stage, in the midst of rock ‘n’ roll, many things happen and anything can happen, whether people come as voyeurs or come to submit to the moment… Performers appear to be submitting to the audience, but in the process they gain control of the audience’s emotions. They begin to dominate the situation through the awe inspired by their total submission to it.
“I’m Really Scared When I Kill in My Dreams”
– Artforum, January 1983

That’s where Gordon’s howling dive into “I Wanna Be Your Dog” begins—in your awe at her own submission to the music, unless it’s Gordon’s awe at her own submission, or her awe-struck anticipation of yours. The performance is absolutely unstable, three minutes of panic, and it still bubbles like a witches’ cauldron; it’ll dissolve anything. This was a kind of fire nobody was playing with in 1982 and 1983—not that I heard, anyway.

Following the five-song 12″ Sonic Youth from 1982, the 1983 Confusion Is Sex was Sonic Youth’s first full-length album. Both came out on the tiny New York label Neutral, but the noise traveled quickly enough. The music was moody, shapely, meandering from songs that resembled nothing so much as the sort of chants little kids come up with when they’ve been sent to their rooms without supper (“Protect Me You,” sung by Gordon; “Confusion Is Next,” sung by guitarist Thurston Moore) to trances that seemed neither to begin nor end. The shapeliness of the music was internal. Without exact borders, the songs rose up, staked a claim on your attentions, fears, or desires, and then turned into air.

That still left “I Wanna Be Your Dog” and the following number, “Shaking Hell,” as ambushes, doors slammed in your face as you drifted in the other music. “Shaking Hell”—Gordon seemingly singing to the mirror—starts out as another mood piece. It chases its title, catches it, and then slowly, deliberately erases the lines between submission and domination, fantasy and rape, performance and violence, crimes and punishment.

“I’ll take off your dress/I’ll shake off your flesh”—Gordon and Moore, guitarist Lee Ranaldo, and drummer Jim Sclavunos, soon replaced by Bob Bert, made the lines thrilling, like any great music, but not exactly fun. No fun, in fact. It’s even less fun in the live version included on Kill Yr. Idols, the five-song 1983 12″ the band put out as a follow-up to Confusion Is Sex. Here a rumble builds all through the performance; by the end the rumble almost has a body, a face, a recognizably human voice—but not quite. People don’t really sound like that—want like that, hate like that—do they?

In 1983, Sonic Youth was going to extremes most other bands didn’t know existed; in a certain way, they were issuing a challenge to the rest of pop music. As things turned out, they pretty much had to answer it themselves.