Panter—man of mystery. This much is known.

Born on August 16, 1935, in Zap, North Dakota, Francis “Gary” Panter knew a quiet, upstanding existence as a clerk at Zap Drugs (an experience perhaps echoed in his bizarre ravings of many years later: “No war is waged here: only a strain, a virus, a toxoid, a Rozz-Toxoid”—the latter phrase suggesting numerous short-lived brand names of the 1950s, a time Mrs. Arnold Towamicky, a resident of Zap, remembers Panter describing as “God’s gift to the Christian Era”) until that day in the late 1960s when the town of Zap was invaded and partially destroyed by a gang of marauding motorcyclists. (This tragedy made headlines across the United States when it occurred, but it has proven impossible to be more specific about either the event or its date. Newspaper records have been expunged, and no one in Zap, or in Beulah, the nearest settlement, is willing to speak for attribution. The terror persists. There are only the vaguest references to “the Zap-in,” and those by persons too young to harbor direct memories.) It was after the carnage, in which most of Zap’s business district, including Zap Drugs, was wiped out, that Panter began to speak impolitely in public places, most often recounting the wholly imaginary adventures of one “Jimbo” (later to feature as the protagonist of The Silver Ghost, a novel by one Chuck Kidder—not, as far as is known, a pseudonym for Panter), a personage previously unheard of by the residents of Zap. Around the same time, Panter, addressed by his acquaintances (he had no friends) as “Frank,” began to refer to himself as “Gary.” Not long after, he disappeared.

As we are all aware, Panter re-emerged in the late 1970s in Los Angeles and gained worldwide fame for drawings focusing on one “Jimbo,” who was presented as a sort of punk Everyman: a young man with the physique of a brick, the intentions of a saint, the temper of a mad dog, and the brain of, depending on the circumstances, either Tom Swift or a quaalude of dubious provenance. Panter—now claiming to have been born in Durant, Oklahoma, in 1950, a pretense he has been able to maintain through daily visits to Muscle Beach—has since taken “Jimbo” into the distant past, into the future, forced him onstage in Japan to do battle with the “Elvis Zombies,” and dropped a nuclear device in his lap. In his most inspired moments, Panter has merely placed “Jimbo” at the hub of the modern predicament (to say nothing of the revolutionary project), as if to see what he, “Jimbo,” might make of it. And yet there is no understanding “Jimbo”—­and, by extension, the modern predicament itself—without an understanding of the trauma that has shaped Panter’s work.

Close study of Panter’s drawings indicates that he was both horrified and enthused, repelled and excited, by the attack on Zap—and it is reasonable to believe that it was Panter’s inability (to slip into psychoanalytic terminology for a moment) to “integrate” this event into the narrow “Zapist” frame of reference he had at his disposal that led to his subsequent bifurcated response, and its sublimation/expression in “art.” Careful examination of the “Jimbo” panels makes it clear that at some unknown time Panter attended a showing of The Wild One (a film, starring Marlon Brando, that was based on a late 1940s motorcycle gang attack on the town of Hollister, California—an event that was in many ways similar to the assault on Zap), and, like so many others, inexplicably confused the experience with a later (or, perhaps, preceding) viewing of Rebel Without a Cause, a contemporaneous film that starred James Dean, as “Jimbo” Stark). In other words, Panter (or his unconscious) created a cartoon figure that combined the body of a young) Marlon Brando with the inarticulate well-meaning of (the late) James Dean, and then placed this figure either on the verge of bottomless rage (the attack on Zap) or stranded in the midst of total devastation (the aftermath of that same attack).

Why Panter persists in reliving, and imposing upon the public, these terrible events of his early middle age is a matter for a psychiatrist to determine; certainly, the claim that his work represents some sort of “metaphor” for our present condition is spurious in the extreme. It can be said without question, however, that his panels are currently fetching very high prices, and that in five years this publication will be worth at least one thousand dollars. 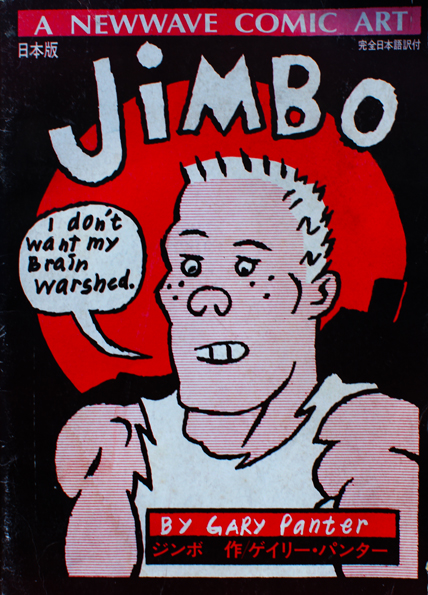