Siren is the new album from Roxy Music, one of the world’s better rock and roll bands; it is exciting, exhilarating, and beautifully made—driven by straight-ahead rock power, and ridden with subtlety. There is a better feel for the dynamics of melody and arrangement on Siren than is to be found anywhere else these days, outside of Steely Dan and the Spinners’ “Games People Play”—the care taken with Roxy’s sides can make you dreamy. The songs, which trace a young hustler’s odyssey from cynicism to romance—from, say, Michael Caine’s Alfie to something like Charles Boyer’s headwaiter—as-nobleman act in History Is Made at Night—are completely convincing, and always in good taste.

They are also extremely effete. Now, rock and roll is not supposed to be effete (or, for that matter, in particularly good taste), and the combination helps make Roxy interesting. Mostly, this comes down to singer, songwriter, and band leader Bryan Ferry, who trades in a very intense kind of camp sensibility, perhaps best captured in “All I Want Is You,” from last year’s Country Life LP, which found Ferry warbling “L’amour, toujours l’amour!” as the band charged forward hell-bent in the general direction of “It’s All Over Now.” There are rules against this sort of troublemaking; it says in the book you can’t get away with it, but Ferry does. He lets you know that whatever it is he’s singing about at any given moment is a great joke (and it is); but at the same time, he really means it. Ideally, laughter and despair are the proper responses to most everything Ferry does.

He really does mean it, I think. Ferry works harder conveying ambivalence and distance than almost anyone else does to convey certainty and immediacy—listen to him long enough, and he actually begins to sound like a real person. Every line played by guitarist Phil Manzanera or saxophonist Andy Mackay is exactly in place; the band flies through the tunes, catapulting Ferry through his adventures, while out of the corner of one eye he keeps tabs on the drummer’s timing. Typically, Ferry sounds on the verge of madness in vocals that are arranged with the precision of those on Dion and the Belmonts “I Wonder Why”; the result is unabashed rock and roll with an odd but unmistakable undertone of gentility, music not simply of taking care, but of being very careful.

Which is to say that while Bryan Ferry may not be the thinking man’s rock star, he is surely thinking all the time.

Ferry plays around with a great many personae, enough to imply a fairly classic role confusion, but his touch on Siren is so sure it implies rather that the confusion is less Ferry’s problem than his subject matter. Since Ferry deals in romantic pop, identity means true love, which, utopia-wise, holds out the promise of both identity and kicks. However, our hero (or anyway Ferry’s) has been around long enough to know that true love also contains the promise of absolute disaster: the shattering of what little spurious narcissistic identity he has been able to patch together, and the destruction of his ability to get any kind of kicks at all. (Never was the masochism of the Don Juan closer to the surface than in Ferry’s version). All of which is to say that Ferry is playing out the role, 10 years after mod, of the lower-class young man (aging, though) who has found no crutch in his struggle to survive in a class-bound society save style.

This is not style as we learned about it from long-gone Swinging London—Mary Quant, Lord Harlech being nice to “the new elite,” and all that. In Ferry’s world (as in the real one) the great Cockney tide has ebbed, and things in Britain are as they were. Once more, style can only mean a perfect imitation of the shrug of the shoulders which the upper classes seem to learn before they learn to walk—an imitation of those who do not care, of those whom nothing in this world can touch. It is a lust for a life lived in situ, so to speak, as opposed to the nervous stasis that is the best the Ferry hero can do. He knows the race is to the swift; but he also knows there are those who need only watch the hopeless spectacle from the boxes, if they are interested, which they are not. 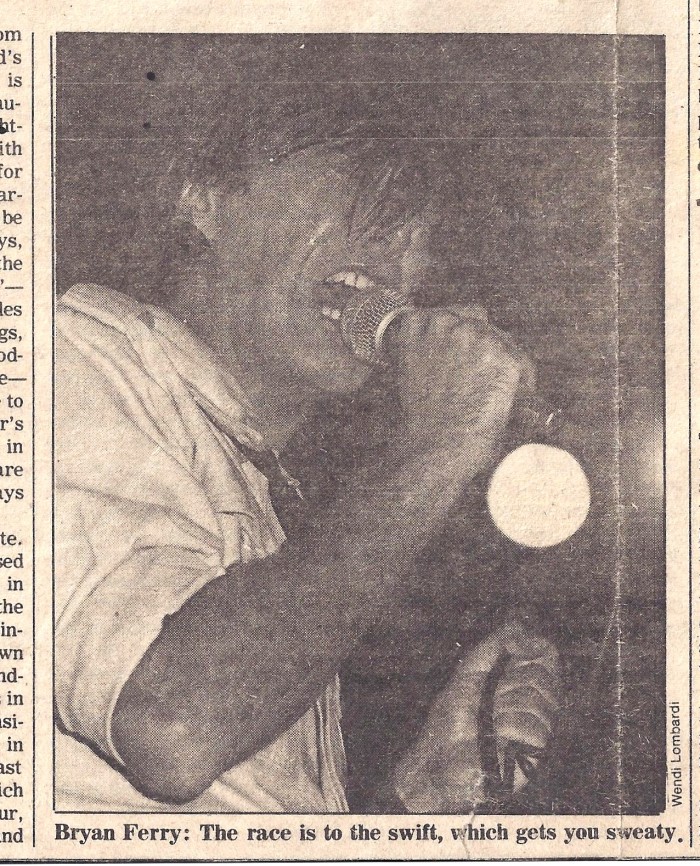 Ferry’s man, then, must imitate those who effortlessly keep him down, whose very existence mocks his attempts to emulate them. The world he inhabits simply offers no attractive alternatives; when Ferry’s hero reaches for style, he is not putting on airs, but trying to breathe. Sometimes, he breaks out of the trap (“Don’t want to hear about et-ti-ket,’.’ Ferry cries in “All I Want Is You,” just before lapsing into French); sometimes he tries to blow the trap up. (The cover of Country Life, with its Soho queens lying half-naked in a verdant green, parodied a British magazine of the same name devoted to the buying and selling of the manors to which are born the bulk of its subscribers). And there are those moments in which the singer really does transcend the trap. “Take me as I am,” Ferry pleads in “Could It Happen to Me,” perhaps the finest tune on Siren, “an average man.”

But the game must be played with such second-by-second intensity that one loses oneself in the struggle; style always implies dis­tance, but one’s commitment to style must be so strong the distance is dissolved. Acting as if you don’t care (“Love is a drug/And I need to score,” Ferry chants harshly, kicking off Siren), you find out that you can’t care, and when true love shows its shining face, no one believes your pledge of love, yourself included.

Boo, as Ferry might put it in one of his more brazen moments, hoo hoo.

So the constrictions of class pro­duce spiritual cancer and ultimate debilitation in all who are born short of its kingdom but refuse to settle for less. This is what Ferry sings about, and this is what his singing is about: a strange version of His Master’s Voice. The accompanying music is properly that of hysteria and restraint: the orchestration of a careful and impassioned attempt to stay human, and still win.

Roxy’s triumph is to make good rock and roll out of this conundrum; they turn it into comedy, as Ferry drives in his own pathos, concealing the pain and copping to it too. “Maybe your heart is aching/I wouldn’t know, now would I/Maybe your spirit’s breaking/I shouldn’t care, now should I,” Ferry sings in the gorgeous “Just Another High,” the last number on Siren. He is singing to (or only fantasizing about?) a woman as corrupted as he is. “I was just another jaded guy,” he confesses to her (or only to himself?) “claiming that love, was another high/Just another high.”

Line by line, Ferry climbs out of the trap, dragging his lover with him. But you don’t find out if they make it, or if in truth the struggle is real—if, finally, the song is any more than just another high itself.