Hammett squatted over the body… He shifted the body enough to get a look at the face hidden by the shimmering ebony hair.

He sighed and stood up and wiped his hand idly on his topcoat, then rested it on the upright gravestone. The marble was icy to his fingers. The Homicide cops had gotten still and intense when he had looked at where the girl’s face had been. It was gone right to the hairline, leaving only splintered bone and red meat.

Thus Joe Gores‘s Hammett (Putnam, 251 pp., $7.95), a new mystery that takes for its hero Dashiell Hammett himself. This is Hammett in San Francisco, in 1928, his work as an operative for the Pinkerton
Agency seven years behind him. It is Hammett as a writer with a foothold in the pulps, a borderline alcoholic on the verge of finishing Red Harvest, the finest detective novel ever written in America.

That is history. From there Gores takes over, drawing the fictional Hammett back into the streets because the blood of a private cop is on Hammett’s hands. It is a nervy move on Gores’s part; given the tension in the book between Hammett’s choice to write and his instinct for the hunt, it is an inspired one. And it works.

The New York Times has compared Gores to Hammett and Raymond Chandler, and said of an earlier book, “The Continental Op could do no better.” Such nonsense makes it hard to appreciate the genius of Hammett’s prose and the toughness of his world. Gores will write as well as Hammett about the same time I do. He uses too many adjectives, too many italicized words (one in a mystery is too many) and too many explanations, which means that Gores has not yet learned to trust his reader, his story, or himself as a writer. As with the cluttered but finally devastating paragraph at the head of this review, the brutal economy necessary to great detective writing is within Gores’s reach, but too often he lets it slip away. The plotting of Hammett is inferior to its first-rate plot; the construction is evident when it should be invisible.

But every time Gores does something wrong—such as losing Hammett with a stiff speech about corruption—he follows up with something utterly satisfying. He never falls into the obvious but almost irresistible trap of imitating Hammett’s style, but he has wonderful fun with pieces of Hammett’s work, which he blends right into his own story. He parodies the classic snappy-detective-repartee routine from Hammett’s short story “Dead Yellow Women,” having Hammett face off with an enormous Chinese bodyguard:

“You been demoted, Qwong?” asked Hammett cheerfully.
“Demoted, oh King of Pursuers?”
“Chin has you at the door.”
“Merely awaiting your August Self.” He made a graceful gesture. “My master is impatient for the unutterable joy of your presence.”
Hammett bowed himself. “Lead on, O Giant of China.”
“That’s terrible,” said Qwong Lin Get.

Gores worked as a private detective in San Francisco for over a decade to get the experience he felt essential to the writing of detective fiction. If nothing else, those years gave him a profound knowledge of his fictional turf, as it is and as it was. But Gores’s greatest talent is for brutality: for violence far more unsettling and out of control than, say, the cheap sadism of Mickey Spillane. The plot of Hammett—Hammett’s attempt to break the web that links a corrupt police force to a white-slavery ring specializing in ten-year-old Chinese girls—exploits this brilliantly. 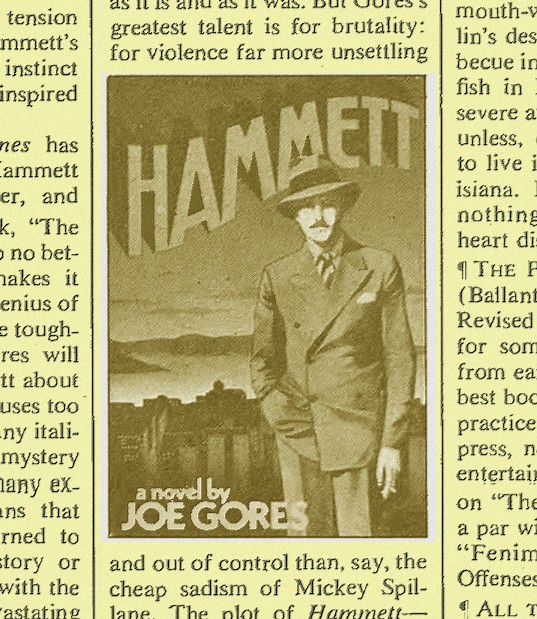 Gores’s scene of a fat woman drowning kittens in Sausalito matches anything Chandler found in the flops of Bay City; the opening of the book is as raw as parts of Red Harvest.

What Gores has not done (and I doubt if it is anything you can learn) is to weave a fabric of dread around his fiction—dread that suggests at once both the failure of society and the evil of specific individuals. It is a certain quality of fear: something that hangs over Hammett’s best books, and Raymond Chandler’s. Chandler caught that quality of fear in a few lines in his short story “Red Wind,” and it is what the American murder mystery is all about.

Still, I read Gores’s book with fascination and—in the end—shock. A few days later, idly musing on Dashiell Hammett, I found that Gores had seduced me into taking his tale as part and parcel with Hammett’s own work. The world created by Gores had been joined to the world created by Hammett himself. That is no mean accomplishment.

→ Red Harvest by Dashiell Hammett (Vintage Paperback); The Big Sleep by Raymond Chandler (Ballantine Paperback); The Chill by Ross Macdonald (Bantam Paperback). These books have two things in common: Each is the masterpiece of the best detective writers America has produced, and each title is a synonym for death.

→ American Fried: Adventures of a Happy Eater by Calvin Trillin (Penguin Paperback). Patriotism of the stomach, marvelously funny and horrifyingly mouth-watering. Warning: Trillin’s descriptions—of eating barbecue in Kansas City and crawfish in Louisiana can produce severe attacks of melancholia unless, of course, you happen to live in Kansas City or Louisiana. In that case you have nothing to worry about but heart disease.

→ The Press by A. J. Liebling (Ballantine Paperback, Second Revised Edition). Out of print for some time, and expanded from earlier versions, this is the best book about the theory and practice of the freedom of the press, not to mention the most entertaining. Liebling’s section on “The Deserving Rich” is on a par with Mark Twain’s piece, “Fenimore Cooper’s Literary Offenses,” and not by accident.

→ All the Livelong Day: The Meaning and Demeaning of Routine Work by Barbara Garson (Doubleday). Personal and disciplined reporting, plus a desire to find out what people mean rather than twisting what they say, make this book a challenge not only to union-management power but to elitist left wing ideology as well. To be reviewed.