1. Babes in Toyland, Spanking Machine (Twin/Tone)
Three women who take up the challenge the Slits laid down in 1977. As if no more than a minute has passed, they shout back: harridan shouts, bloody laughter.2. Marianne Faithfull at Slims, San Francisco (April 17)
There was a searing, anti-art ending on the arty “Sister Morphine”; with “Broken English,” the lyric’s insistence that the singer didn’t know what the Baader-Meinhof terrorists were talking about was now an insistence that she understood every word. 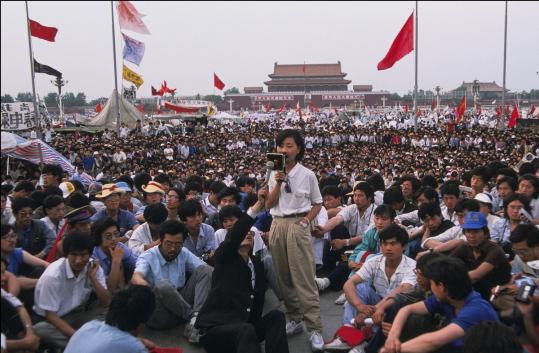 3. Chai Ling: on Nightline (ABC, April 17)
A few days after the killings in Tiananmen Square last year, Chai Ling, a leader of the demonstrations, smuggled a tape from her hiding place: “I am still alive,” she began. Those words were a stoic anticipation and refusal of the quick death she was facing as she spoke. This night, just a few days escaped from China, she appeared from Paris on a screen talking in voice-over translation to Ted Koppel, who ignored her amazing smile in favor of asking her if she intended to meet with George Bush; better he should have asked if she wanted to meet with Sinead O’Connor.

5. Bobby “Blue” Bland, Junior Parker, Earl Forest, and Johnny Ace: The Original Memphis Blues Brothers (Ace reissue, 1951-53)
The title refers less to Bland et al. than to Matt Murphy, guitarist on these sessions, who later turned up in The Blues Brothers, where he walked out on Aretha Franklin to play with his soul brothers John Belushi and Dan Akroyd; the music is on side one, Bland wailing “Drifting from town to town” three times. His singing is so saxophonic it suggests that if an instrument can talk, to truly communicate a singer has to get past words.

7. Richard Beymer: on Twin Peaks (ABC, May 3)
In bed with Piper Laurie, the town Slime King gets up, brandishing one of the non sequiturs the script piles on its red herrings: a tiny Elvis whiskey decanter. “Going to give Little Elvis a shower,” he says. But what’s in the bottle?

9. Mark Kitchell, director: Berkeley in the Sixties (Kitchell Films) and Richard Lester, director: Paul McCartney in His Times (Memorial Stadium, Berkeley, April 1, short film introducing McCartney tour)
Combining documentary footage and now-interviews with the then-participants, Kitchell’s movie replaces history with highlights: there’s no texture, no sense of lived time. There are moments when the forgotten comes back as shock, notably then-governor Ronald Reagan, not the “easygoing monster” (Robert Christgau’s perfect words) of the presidential years, but hawk-faced and harsh, matching the Mr. Big he played in Don Siegel’s The Killers. Ultimately the picture is tinged with a condescending sentimentality; when it ended with Pete Seeger singing “We Shall Overcome,” the we seemed smugly narrow. I took part in most of what I was looking at, but I was far more moved by Lester’s little triptych: “history” on the sides, Paul in the middle. At first it was an ordinary collage, Beatles surrounded by Kennedys and miniskirts and missile crises—with the soundtrack Beatle music more vivid than any of the images. Then Lester broke the formula: four unrelieved minutes of the Vietnam War, no Beatles and no Paul, simply tripled horror, all to “The Long and Winding Road,” which against what one was seeing was almost silent, sucked into the air. When the film ended with red, lurid night footage of the massacre in Tiananmen Square, it didn’t seem cheap. Paul McCartney had been reduced to one person doing his work in times that overtook him. Then he came out and sang his songs as best he could.

10. Eddie Money: “Peace in Our Time” (Columbia)
Along with the title phrase, the lyric includes “heaven on earth,” “turning water into wine,” “streets of shame,” “cities of dust,” “phoenix from the flames,” “break down the walls,” “wheels of fortune,” “keep on keepin’ on,” “on a wing and a prayer,” and “a song in our hearts,” encapsulating better than a hundred academic papers the poststructuralist refutation of “the original.” Or a dogged refusal to shut up.