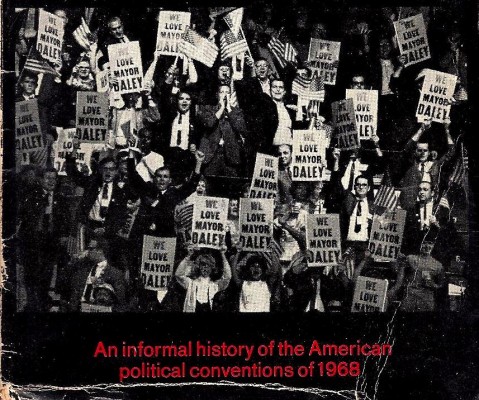 Miami and the Siege of Chicago—An Informal History of the Republican and Democratic Conventions of 1968 by Norman Mailer, Signet Books, 223 pp., 95c.

I read Miami and the Siege of Chicago on the night of October 29th. Hubert Humphrey and Richard Nixon were on the television as usual. With his best “politics of joy” smirk, fresh from telling the ghetto that “I am a soul brother,” Hubert was screaming to a crowd of suburban whites: “We’re really gonna sock it to ’em!” But Nixon was not to be out-done. He was better. The hall filled with shiny kids in shiny Nehru jackets and shiny medallions, “The Next President” rose to the climax of a politically obscene imitation of Martin Luther King pronouncing “Free At Last!” Nixon too called out to the people, arms waving, with the new litany of the image-makers, yes, he was almost frantic with the desire for the Prize: “SOCK IT TO ‘EM, SOCK IT TO ‘EM, SOCK IT TO ‘EM!”

It’s come to this. As I read Norman Mailer’s new book, as I tried to get inside the phrases and the mind of the finest writer in America, I listened to some very old tapes made by Bob Dylan, tapes of traditional songs that grew out of the American soil, songs that must have ridden with Dylan down many highways. So long ago–what was it like before I heard of Bob Dylan, before the magic lantern began to turn? Ancient history. And yet those old songs were the melodies of the first days of the Kennedy era, before riots, before the “process of assassination,” “before” the war. It was all there, of course, but was all invisible, waiting—for us?

What seems like ancient history is just a few years down the road. 1961. There was a Mayor Daley then, a Hubert Humphrey, a Richard Nixon, even a Lyndon Johnson. Little men have grown into demons, bland, fastidious, a grin peeking through as the dead arc posted on the wall.

Thus Norman Mailer was to cover the political conventions for Harper’s Magazine and Signet Books. He’d done it before—1960, 1964—drawing a fine line between cynicism and hero-worship with the Democrats, getting scared and disgusted, in a comfortable way, with the Republicans. It wasn’t that hard—go to the convention, meet the candidates, get a few impressions, write it up, have a party on election night, sweat out the returns. This year it was different. Mailer’s candidate, Bobby Kennedy, hadn’t been defeated; he had been shot and killed. It wasn’t a matter of drowning sorrows or slapping friends on the back. Four people died in Miami while the Republicans waxed Richard Nixon; glass and clubs cut into flesh while Hubert Humphrey kissed his TV set in Chicago.

Miami and the Siege of Chicago be­gins as an attempt by Mailer to cover the conventions in the same old way, with the same old prejudices. Immediately, there is the horror of discovery that he, Norman Mailer, wants deeply to find it in himself to vote for Richard Nixon, to be able to believe in Nixon’s simple picture of the good lonely forgotten middle-class American. Mailer remembers small towns, hamburger joints, juke boxes and bars and bad TV—this is America, isn’t it? I am an American… my country… The vision vanishes. The eye of the reporter returns. But something is going on. “What I call 1940, they call the present, and live in it,” said a friend of mine. Mailer remembers 1940. He is forty-five years old. What is he doing on the side of kids only born in the midst of a war he fought?

The story of the Republican convention passes quickly, an interesting report that is always threatening to come apart at the seams, always at the point of explosion, but always returning to the “journalism” that the literary magazines say Mailer is writing these days.

It is in Chicago that the fears and fantasies of a vote for Nixon take on meaning. Chicago reveals the alternative of a vote for Nixon. It is not a vote for Hubert Humphrey, not a momentary battle in the streets of Chicago. It is a commitment, for Mailer, to a battle that will last until he is an old man and finally dead. He sees the country that, for all its evil, has let him write his books and make his movies—and that country is on the verge of destroying the psychological space that makes it possible for him to do his work, to do what he knows he was born for, because civil war is in the air and Mailer is being thrust into a choice he does not want to make.

Do not buy this book in hopes of enjoying another masochistic retelling of the destruction of the “democratic ­process” inside the convention hall by the mechanics of fascism on the street. There was more black-and-white “moral outrage,” more graphic description of atrocity and repression in the pages of Time Magazine. In this book is the story of a brilliant man, a brilliant writer, struggling with the future Chicago has revealed. Mailer knows that the liberal society never tells where the bodies are buried, and he has discovered why, this time, the tale was told:

“The military spine of a great liberal party had finally separated from the skin… the power had decided, ‘No, do not let them march another ten blocks and then disperse them on some quiet street, no, let it happen before all the land, let everybody see that their dissent will soon be equal to their own blood; let them realize that the power is implacable, and will beat and crush and imprison and yet kill before it will ever relinquish the power. So let them see before their own eyes what it will cost to continue to mock us, defy us, and resist… There are more cowards alive than the brave. Otherwise we would not be where we are.”

The guts of this book is in Mailer’s attempt to understand if the words he has written can really be true, to understand what it will mean if they are. Mailer closed his essay of last year, The Steps of the Pentagon, with these lines, dictated to the press as he was released from jail:

“…we are burning the body and blood of Jesus Christ in Vietnam. Yes, we are burning him there, and as we do, we destroy the foundation of this Republic, which is its love and trust in Christ.”

Now he can wonder if the blessing of God can truly have been withdrawn from this country. One cannot know. As Norman Mailer left the convention, “he met Senator McCarthy’s daughter… now in a quiet horror over the bust [of the McCarthy workers], and she asked him what he would do about it.”

“‘I’m going to catch a plane and see my family,’ he told her, smiling into the proud disapproval of her eyes. ‘Dear Miss,’ he could have told her, ‘we will be fighting for forty years.'”

The election is over, of course. If California had gone the other way… Nixon elected by only about 300,000 votes… Jack Kennedy took office with a plurality that was only slightly smaller, and yet carried with him all kinds of ambiguous promises of new things, new faces, new ideas, perhaps? At the least, an old man traded for one who was young. There were to be no new faces this year, and we all knew it—Nixon’s government will be, as Humphrey’s would have been, a collection of those things that can be salvaged from the past. No surprises. The electorate knew that was to be—they expected no surprises.

Only the TV newsmen were possessed by a mad vision, a vision sighted on the verge of certainty. They pushed their half-felt desires to the edge of calamity, with a deadly fantasy of the election plunged into the rusty gears of the Electoral College, where it would be eaten, so that we might all participate in a satanic banquet, devouring all the underpinnings of our democratic process: consent, legitimacy, the myth that votes count.

Vice President Garner once said his office “was not worth a pitcher of warm spit.” The nation’s fears had brought the American people to the verge of recreating the presidency itself in that eminently American image. If California had gone the other way…

But it didn’t happen, “The apocalypse is just around the comer .” Was it Herbert Hoover who said that? I can hardly remember. That the corner is yet to be turned is in a strange way a tribute to the stubborn courage of the American people. In a campaign marked by virtually no sense of choice, no sense of attractive or exciting issues, let alone candidates, the people voted.

They chose to vote, to try and keep the system working, tried to keep it standing, tried to make the system work well enough so that some sort of real president might emerge front it. The people did not speak for Nixon—they spoke as loudly for Hubert Humphrey—in fact, they did not speak loudly for either of them. There was little idea in the country that the future would be different, even feel different, with one man as opposed to the other. A vote for one man as opposed to the other was a question of leaning for reasons that could hardly be articulated even falsely, for reasons that could not possibly he articulated in terms of what really mattered.

The people did not take that step across the borders of their political minds—they did not cross that mythical line Sam Houston drew when the chips were down at the Alamo. The step that was taken was a choice to vote at all for Humphrey or Nixon, a scared attempt to prove that the game was still to be played by the old rules. Maybe it worked this time. “The truly American candidate of 1961,” as a writer called him in the Rolling Stone of a few months ago, is still waiting in the wings.

Henry Adams was in Washington, D.C. as the Civil War rose up on the horizon. A spirit of despair and desperation hung over the Capitol as plans were made for the inauguration of a new president. We were “wandering between two worlds,” he wrote then, “one dead, the other powerless to he born.”