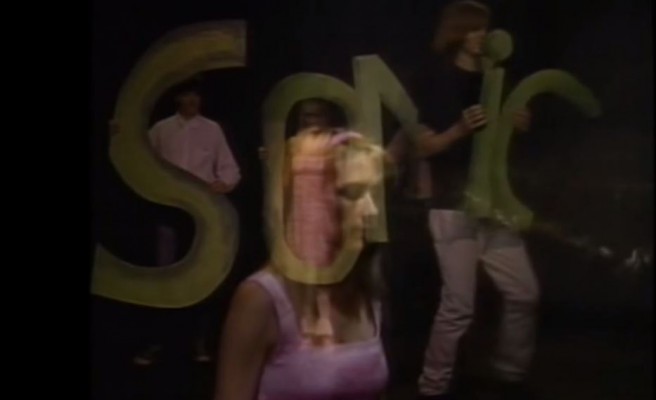 1. Alexander Brodsky and Ilya Utkin, Site Specific Installa­tion, in “Between Spring and Summer: Soviet Conceptual Art in the Era of Late Communism” (Tacoma Art Muse­um, through September 9, at the Institute of Contemporary Art in Boston, November 1 through January 6, 1991)
Over your head is a labyrinth—or spiderweb—of household detritus.­ Below is a clear pool with hundreds of scissors, batteries, rags, broken toys; the pool is layered and infinitely deep. Crumbling Greek columns connect the pool to what seems like its overhead reflection. But the stuff overhead is real; the stuff below is just imagery. It feels like the opposite. The piece has a room to itself, and it makes a world; it would be called “The Archaeology of Everyday Life,” or “The Ruins.”

2. Sonic Youth, “Tunic (Song for Karen),” from Goo (Geffen)
Dressed up as Karen Carpenter in heaven—or stripped naked—Kim Gordon insists on the edge that was almost always cutting in Carpenter’s singing, the edge Carpenter did everything she could to hide, failing only with “Superstar,” “Merry Christmas Darling,” her life, and this song.

3. Romantics, “What I Like About You” (Diamond Vision reissue, 1980)
Once the Oakland A’s took Kool and the Gang’s “Celebration” as a theme song, and had a Coasters’ hit rewritten as “Billy Ball.” Now, at the Oakland Colise­um, you hear the Romantics every time the A’s win, except when the Diamond Vision archivists program Michael Mo­rales’s version. It’s not as good, but you won’t hear it anywhere else.

4. Jon Wiener on Albert Goldman’s Life cover story, “Thirteen Years After the Death of ELVIS PRESLEY New Evidence Points to an Inescapable Conclusion—suicide” (June)
“When Goldman brings out a new paperback of his Lennon book, he will discover that he was wrong; Lennon committed suicide. People told him, it was there in his notes, but he missed it.”

5. Van Morrison: “Almost Independence Day,” from Saint Dominic’s Preview (Warner Bros., 1972); and X: “4th of July,” from See How We Are (Elektra, 1987)
It’s right that flag burning is legal, but I could never do it; to say that the flag is only a symbol is to trivialize the diversion of reli­gious epistemology into secular Western culture since Jeho­vah forbade images of himself, which is to say that to burn the flag is to make a kind of exile. If you want confirmation that the flag contains betrayal as well as promise, you can listen to these songs. X asks the promises of the Fourth of July to redeem the betrayals of a marriage; the conflation of the personal and the political is insensate and inevitable because the promises are boundless. Morrison watches from Marin as fireworks explode over San Francisco Bay. The lights are shrouded in the fog that rolls in over the Marin hills, and very nearly the whole of the instrumentation is in the Moog synthesizers of the late Bernie Krause and Mark Naftalin, who make a foghorn sound—a fog sound. But if fireworks are already exploding, why is it “almost” “Independence Day”?

6. Gang of Four: The Peel Sessions Album (Strange Fruit, U.K., 1979-81)
The most exciting account available of the discovery that everything we understand as natural is someone else’s project.

7. Social Distortion: “Ball and Chain,” from Social Distortion (Columbia)
The Rolling Stones’ “Dead Flowers” without humor, but that lack, perhaps forcing you to take the singer’s self-pity seriously, could be what’s kept this crude number sneaking around the radio for months. What’s simple—simplistic—about the tune, and that includes the blurry guitars, the fourth-hand lyrics, the worn-out voice (which senses a hit), is also what’s irreducible about it. Verdict: a classic.

10. Anonymous: “The Insult That Made a Stiff Out of a Stooge!” in Skels Life #7 (March, c/o Mystery Fez, 14 Orient Rd., Mastic Beach, NY 11951, $1)
The old Charles Atlas wimp-who-gets-sand-kicked-­in-his-face comic-strip ad, fanzined.­ The creep sits on the beach listening to Guns N’ Roses’ “immigrants and faggots… police and niggers,” gets dog shit in his face, goes home, and kicks his dog: “I’m sick and tired of being a piece of human refuse!” Next panel: he’s hanged himself. Dog, thinking: “Cool.”