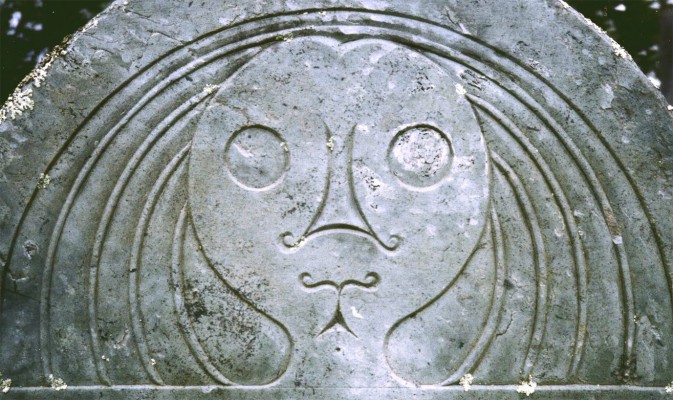 I first encountered the winged death’s-head—angel’s wings emerging from a human skull—a few years ago, in an old Puritan graveyard off Boston Common. There was row upon row of them cut into gravestones two and three hundred years ago by descendants of John Winthrop and others who had arrived in Massachusetts Bay in 1630.

The total effect was bizarre. Each stone offered its double image of putrefaction and transcendence, and each was different. Some skull faces were abstract, virtually pictographic, appearing more primitive than but sharing the supercharged mythic power of Indian rock drawings or Celtic statues. Some faces were full of delight; others seemed condemned. Some were malevolent, clearly representing the triumph of death, of sin over good intentions; some seemed “at peace.” Still more seemed baffled, in limbo, as if to represent those buried beneath them at the very moment of death, in suspension between paradise and damnation. Facing onto present-day Boston, each stone seemed to bide its time, with a certainty the depth of which I could not begin to comprehend.

If a skull with angel’s wings was once a symbol of life in America, it is, with its almost demonic insistence on paradox, a symbol with life in it yet. Certainly Lincoln delivering retribution with one hand and grace with the other in his Second Inaugural Address, or Faulkner, or Robert Johnson, or Bob Dylan making the Basement Tapes, would feel attuned to that remarkable image—perhaps the most inclusive and suggestive that America has ever produced. We could have done worse for a flag, to tell the truth.

Allan Ludwig‘s Graven Images: New England Stonecarving and Its Symbols, 1650-1815 (Wesleyan University Press, 482 pp., $12.50) is a big, superbly printed collection of photographs of the images on Puritan gravestones, of which the winged death’s-head is only one. It is an extraordinary work, and its academic trappings should not discourage anyone looking for a revelation about the resources, strength, and complexity of American culture. Graven Images is not to be compared with the artsy-craftsy gravestone rubbings on sale at your local Bicentennial folk art show, mixed in with Grandma Moses-isms and whirligigs. To leaf through this book is to confront a vanished community trying to make sense of itself through art.

What kind of sense is the subject of Ludwig’s lucid, provocative analysis, which accompanies his hundreds of photographs. Incredibly, the images on Puritan gravestones were at one time considered merely decorative, devoid of meaning; Ludwig finds in New England stone caning an attempt to provide comfort, inspiration, aesthetic delight. Most important, he argues that the gravestone images were in fact the popular culture of an antidemocratic society that was divided between saints and “natural men,” between the elect and reprobate—a strictly ordered society in which virtually everything else that defined the meaning of life was handed down from above. The gravestones represented, Ludwig believes, an attempt to create a dimension of mystic immediacy in a culture that in its official version was too abstract and scholastic to satisfy basic human needs in all but a few—the need, for example, for a reification of mystery through symbols.

I found great pleasure in the pictures in this book for months before I finally sat down to read what Ludwig had to say about them; the book can be “read” not only as a serious analysis of American culture but as a volume of magical incantations. What is most intriguing about Graven Images, finally, is the power the symbols retain. “Ritual, symbolic art, music, dance, poetry, and literature and myth have far older pedigrees [than theology],” writes Ludwig, “and there is sufficient reason to believe that if civilization ever loses these Orphic gifts society will be deeply impoverished.” With his book Ludwig has delayed that loss; the symbols he has collected connect. To say that one cannot comprehend their depth—and Ludwig himself ultimately falls short—is not to say one cannot recognize oneself in their contours, in their suggestions and finally affirmations of horror, beauty, and doubt.

With their Illuminatus trilogy (The Eye in the Pyramid, The Golden Apple, and Leviathan, Dell paperbacks, $1.50 apiece), Robert Shea and Robert Anton Wilson have if nothing else brought off the longest shaggy dog joke in literary history. To briefly summarize the more than 800 closely printed pages: a journalist, a sort of modern-day Candide, sets out to investigate some mysterious doings in Mad Dog, Texas, and innocently trips over one of the many feet of the Illuminati, the greatest conspiracy in history—or, to put it another way, the conspiracy that is history. Taking their cue from Ishmael Reed’s Mumbo Jumbo (“The history of the world is the history of warfare between secret societies”), Shea and Wilson catapult their hero and uncountable other characters through a series of adventures and in transit manage to clear up every conundrum currently bedeviling the Western mind, including the assassination of JFK (brilliantly handled), the death of Marilyn Monroe, the history of Atlantis, dolphin intelligence, the last words of Dutch Schultz (the touchstone of the books), prehistoric cross-continental cultural diffusion, the Loch Ness monster, the fate of Adolph Hitler, the death of John Dillinger, and a lot of other things I’ve forgotten. A hundred pages in I couldn’t figure out why I was wasting my time with this nonsense, after 300 I was having too much fun to quit, and by the end I was eager to believe every word—even if the only conspiracy really at work here is Shea and Wilson’s devilish exploitation of our need to make ordered sense out of everything under the sun; their exploitation, in a world, of the narcissism of rationalism. Anyway, I loved it.