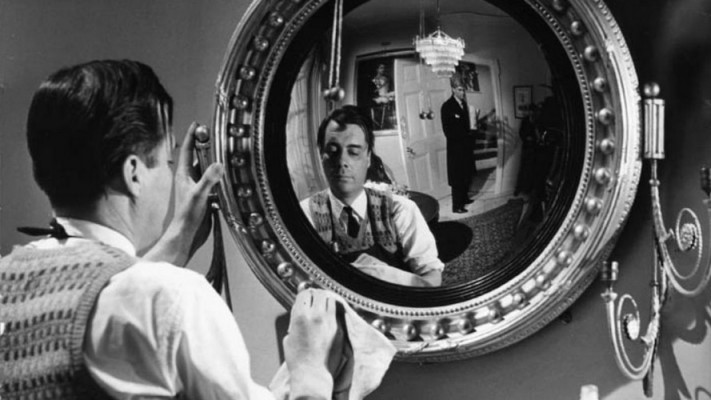 1. Michelob TV commercial, “I Move Better in the Night” (Needham Harper/Jeremiah Chechik, direc­tor)
In this best of all possible music videos, every situation is infinitesimally developed, and then left completely open. A blond woman turns her head after kissing her boyfriend; there’s a blithe, irreducibly au­tonomous sensuality in her face that will never have anything to do with beer. In fact, it doesn’t seem to have anything to do with her boyfriend.

3. Oingo Boingo, “Not My Slave” (MCA)
Pointless old “new wave” group finally devolves into the new Raspberries. I guess it was worth the wait.

4. 77’s, “I Can’t Get Over It” (Island)
Faceless: words and music just this side of absolutely nothing, but the band finds a tough groove, and the guitarist knows just what to do with it, and what not to.

6. Fleetwood Mac, Tango in the Night (Warner Bros.)
Some people find this kind of dull, but it’s saving dentists millions on novocaine, the American Associa­tion of Anesthesiologists is sponsoring the tour, and Wizard won a furious bidding war for the air freshener rights—in a month or so, when you spray your room with “Evergreen” or “Floral,” you’ll hear FM’s new melodies at the very same time. Of course, some people think they already do.

7. Joyce Milman and Mark Moses, “You Read It Here April First” (Boston Phoenix, April 3)
Gossip columns are boring because they try to make you care about what boring peo­ple actually do. The one-step-beyond ap­proach turns up the real inside dope, as in this notably sustained effort, where “Paul Simon’s next album promises to be another eclectic trendsetter. The multi-Grammy winner is recording an album in faraway Minneapais with a local musician named ‘Prince’ who plays what the natives refer to as ‘funk.’ Says Simon, ‘I heard a tape of this wonderfully joyous music at Sting’s… He said it was simply titled 1999, and I went crazy trying to track down the artist…'”

8. Culturcide, “Industrial Band,” from Tacky Souve­nirs of Pre-revolutionary America (no label, available at Tower Records)
Citing Lautreamont on the neces­sity of plagiarism, these Houston illegals bent on the exposure of pop as a false consciousness machine play other people’s hit records and sing their own words over them. They can’t get here from there—can’t get off the records and into the social milieu they want to talk about—but that leaves one small classic, which underneath is still Grand Funk’s “We’re an American Band”: “Now, these fine ladies, they had a plan/They was out to meet the boys in the band/They said, ‘C’mon, dudes, let’s have sex!/But we just talked about child abuse and Hitler’s SS…”

9. Wim Mertens, Educes Me (Crepuscule, Belgium)
On a day so bad it seemed every other person I saw deserved to die, I walked into a record store that was playing this piano-and-incomprehensible-vocal item by the man who also works as Soft Verdict. It sounded like 17th century cathedral music, composed after the mass had been celebrated and everyone had gone home—though it turns out the melodies are cheap pop spun into a web of preciosity. It calmed me down like cold medicine kicking in.

10. Elvis Costello, “I Want You” (San Jose Civic Audi­torium, April 16)
Quietly diseased on disc, performed solo this is a horror movie that doesn’t need special effects: The Servant, maybe, or M. The words, “I want you” alternate every other line with collapsing scenes of torture, flagellation, remorse, bloody glee; at first you’re convinced it’s all happening in the singer’s mind, next that it’s happening in the flesh. “I want you/And when I wake up,” Costello sang, just as he does on Blood and Chocolate—and then he pulled the string. Hanging onto the end of it were Dionne War­wick and Aretha Franklin, who came tumbling into the song like new victims: “—and put on my makeup/I say a little prayer for you/Because I want you…”