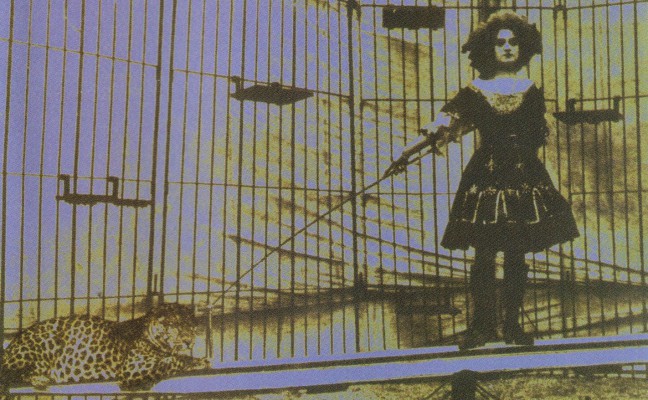 Many years ago, the man with his name on this disc had a hit single. In a time when no one quite knew what rock & roll was, his record was one of the items people spoke of when they wanted to answer the question. But that was the only record the man made that anyone ever remembered. His last album came out more than thirty years ago. In 1975 he opened a teenage crisis center in North Little Rock, Arkansas.

You wouldn’t know any of that listening to Wildcat Tamer, and you don’t have to. It begins with a great clatter: a car starting up, turning onto a back road. But soon enough the singer has you in this place called Loser’s Lounge, and there’s no sign he or anyone else is leaving. By the time the record ends, you may imagine you’ve felt the singer’s six decades in your bones and you may be wondering why he doesn’t. His voice is thin, flinty (I see Randy Johnson on the mound: unsightly, gangly, thoughtful, good-humored and dangerous); you can’t tell what the voice wants, just what it knows.What it knows is what it needs to know. For the forty-six minutes of Wildcat Tamer, you hear a tone of nothing to prove. The many different styles the voice takes up—stick-shift rockabilly, joke tunes that sting, a folk song that was old a century ago and here sounds new, blues curling into the after-hours—soon don’t seem like styles at all. A personality emerges, and then what you’re hearing is the way a person’s moods shift, from not having a care to not caring. “Wildcat Tamer” was an R&B hit for bluesman Tarheel Slim and Little Ann in 1959, less a song than an excuse to play some nice guitar; now it’s harsh and full of glee, a noise that seems to have come out of the ground, less a song than an excuse to get gone. On “Change Game”—a marital complaint, sort of Ernie K-Doe’s “Mother in Law” speeded up—the singer (“Did you hear me, baby?/Did I make myself plain?”) sounds like Dana Carvey’s Ross Perot. But “Hat Trick” makes a world out of the sense it gives of a man looking over his shoulder, talking to himself, staring into a glass, wondering if it’s as empty as it looks.

“Whenever the mood hits you,” the singer impatiently says to his band just before it cracks open “Goin’ Down the Road.” From tramps who never used real names to artists like Bob Dylan, who doesn’t either, thousands upon thousands of bemused, uncomfortable Americans have made this song their own. Has anyone else ever found a verse in it that consists merely of suggesting, in the most unassuming manner possible, that “things ain’t always what they seem”? More than anything else here, that moment seals the return—or just the passing through—of Dale Hawkins. “Suzie 0” was a signpost in 1957, and likely it always will be; what’s inside Wildcat Tamer is more like the Interstate Highway System, not a perfect gesture but a whole life lived.