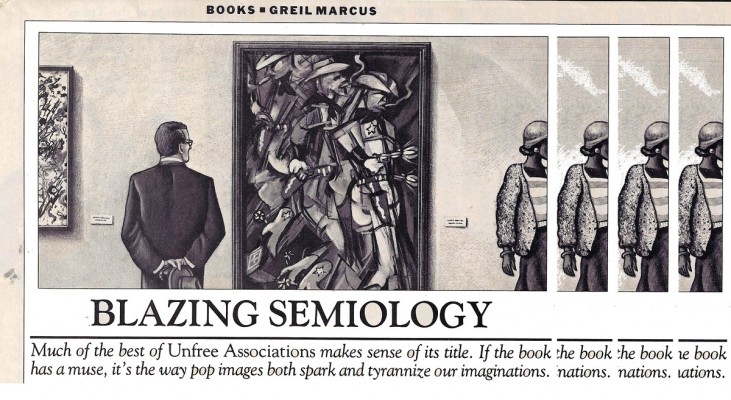 Leafing through this book of poetry, I stopped at “Spaghetti Western Titles”—which is just that, an alphabetized list of 57 of them. At first a good laugh—I cracked up at God Forgives, I Don’t—the poem/list soon resolved itself into a fabulous piece of iconography, staking out territory that ought to be utterly banal but that instead (as the genre organized itself, defined its terms, subverted itself, exploded, and reformed) appeared as a mystery. Django (footnoted as “Watched by Jimmy Cliff at the Kingston Rialto in The Harder They Come,” which neatly expands the territory) opens up into an internal list of eleven consecutive additional Django adventures; the alphabetical order allows for a brief subtext further on, as one encounters The Return of Django, Son of Django,and Viva Django. Echoes linger, and force a rereading (one tends to rush down a list): Don’t Wait for Django, Shoot makes no sense, except perhaps as a bad translation from Italian, until one remembers, or rediscovers, that Django Always Draws Second. But the Django story is altogether superseded by the gnomic epic of Sartana. We first meet him in the innocuously conventional Django and Sartana Are Coming (by this point in the poem, titles have completely overtaken their movies); he deepens in interest with Django Defies Sartana, and seems to have been well disposed of in Django Does Not Forgive (by this point in the poem, the imperative of alphabet has completely overtaken any lingering concern for the order in which the films were actually released). But Sartana re­appears, and rather hideously ups the ante of the whole enterprise, with Sartana, If Your Left Arm Offends, Cut It Off (your left arm?), and then wraps up the genre itself with the plainly untoppable Sartana Kills Them All—unfortunately followed, according to the rules of the poem, by the pallid Sartana’s Coming. The story, though, is hardly over: the luck of the draw provides a classic final shoot-out, as They Call Him Holy Spirit clashes with They Call Me Provi­dence—itself answered by They Call Me Trinity, which pretty much settles the game. Duchamp’s theory of the found object has never borne more delicious fruit: Covino may be the artist here, but the genre is the poet.

“Spaghetti Western Titles” is a wonderful joke and an orgy of inevitable semiology; the similarly “found” “Charlie Watts: Madrid Mexico City Montevideo” very quickly turns into something like a horror story. “Mick Jagger and Texas-born girlfriend Jerry Hall, escaping from/the mad social whirl of the Stones’ current American tour, are/believed to be weekending at a friend’s place on Montauk Point,” it begins—but as it moves on, constructed entirely from bits and pieces of various gossip columns, the lines shrink sequentially toward the left margin. “With the Empress Farah Diba of Iran” gives way to “in a gold lame jacket,” which surrenders to “looking terrific”—until, in the rhythm of the declension

the mute last word carries the full meaning of all the lines that have preceded it, which is to say that it carries, flaunts, their full meaning­lessness. The ugliness of the slide isn’t only or even principally the gruesomeness of Mick Jagger’s social life, the implicit betrayal of the rebellion he once seemed to rep­resent; he can do what he likes. It’s the simple fact of what we want to read about. You can’t turn away from this poem; you’re too socialized by its found cadence. The mo­mentum of that declension is fierce.

Much of the best of Unfree Associations makes sense of its title; if the book has an overriding subject, or a muse, it’s the way pop culture images both spark and tyrannize our imaginations. Born in Brooklyn in 1950 and presently a film critic for the Express, an excellent Oakland/Berkeley weekly, Covino nevertheless writes with a European’s apprehension of the ultimate strangeness, the foreignness, of the products of American (or, as with “Spaghetti Western Titles,” American-inspired) fantasy machines. He has a European’s ambivalence toward pop cult images: he can’t take his eyes off them and doesn’t want to; he can’t shake his dread of their power over him; he can’t ever take them for granted.

As in Wim Wenders’s pre-Hammett films (notably The American Friend) or the novels, poetry, and plays of Austrian Peter Handke (notably Short Letter, Long Farewell), in Unfree Associations the realm of pop culture is presented as a realm of disguised incantations and muffled spells. Wenders has said that American pop culture “colonized the subconscious” of his generation, postwar German youth; one aim of his films has been to make that subconscious conscious, to allow it to know itself, to defeat the mystery, to at once embrace and disarm the spell. Peter Handke’s play Offending the Audience works from the strictest premises of twentieth-century European modernism, the outsider artist’s denunciation of the bourgeois audience through provocation and shock; in 1966, when it was first published, Offending the Audience was a much needed 50-years­-on dada revival, but no more than that. It was almost as traditional and sanctified as a revival of expressionism. Yet in Handke’s preface, “Rules for the Actors,” along with “Listen to the litanies in the Catholic churches” and “Listen to the simultaneous arrival and departure of trains” (good, conventional cues from the annals of twentieth-century modernism), was this: “Listen to the dialogue between the gangster (Lee J. Cobb) and the pretty girl in The Trap, when the girl asks the gangster how many more people he intends to kill; whereupon the gangster asks, as he leans back, How many are left? and watch the gangster as he says it.” After pages and pages of good, conventional European attempts to explain what it means to offend the audience (Django may draw second, but the American shoots first), Handke shifts gears and tries to make the spirit of Lee J. Cobb take over, tries to make his play violent: “You butchers, you buggers, you bull­shitters.” And he fails; that memory of Cobb leaning back for his big, throw-away line (Brando sneers, Elvis’s lip curls, but the European cannot throw away a line) trivializes the cultural weight of the dada revival. It’s precisely that power in the pop culture image that cannot be taken for granted, from which one cannot look away: the murderous seduction of pop exploding through the best education western civilization can muster, a single bullet taking out Shakespeare, a mob stringing up Plato, a thug rubbing Thomas Mann’s face in the dust.

Like Handke and Wenders, Covino is trying to get inside the mechanics of assault and subversion in pop culture images; to explicate or at the least to expose the way they work. It is, one might think after reading “Spaghetti Western Titles,” “Charlie Watts,” or the cool “Television Participates in the Project of Redressing Historical Imbalances in the Area of Race Relations,” the very refusal of these images to assume the burden of any meaning at all that is the source of their power, or our attraction to them, or our inability to accept their power. These images—from movies, songs, and detective stories, all made only to be consumed and forgotten—present themselves as trash; they promise only to entertain. They were made without politics, goals, or intent—and they leave us helpless before them. These images twist our desires until they seem to devour themselves.

The most ambitious and the most fully realized piece in Unfree Associations does for the high culture of European modernism what “Spaghetti Western Titles” does for pop. This is “The Legacy,” which opens the book: a miniature history of culture made with politics, with goals, with intent of the most serious kind—and an account of a culture that has nowhere near the impact of a culture that could care less.

This is culture as acted out by Handke with Offending the Audience (and in fact Handke and his play make an appearance), the dada tradition in which the artist works for distance from the dominant society in order to attack it. It begins in 1848, when the French poet Nerval “led a lobster on a satin leash through the throngs of merchants and aristocrats at the opera On opening night,” moves through Rimbaud and Mayakovskyi from one legendary, treasured avant-garde incident to another, until Covino, writing in the first person, as the representative of the whole tradition, begins to add up the score—

and then presents the unpleasant total: the will to change life and to change the world drives the most heroic art, and art as politics is an il­lusion paid for only by those who propagate it. Over and over, dada goes to the same grave—and Django Kills, Django Gets a Coffin Ready, Sartana Pays (Have a Good Funeral). Culture, as they say, is everyone’s birth­right, and never more so than in this book.

→ The World of Henri Rousseau, by Yann le Pichon (Viking, 285 pages, $75). If you have a lot of money, and a friend or relative who deserves a very fine gift, this enormous and elegant volume is what you’re looking for. Rousseau (1844-1910), at first con­descended to as a primitivist, a sort of French Grandma Moses, was one of the most ambitious and threatening of all mod­ernists; he was far beyond the surrealists (who claimed him for their pantheon) in asserting the primacy of the dream. Le Pichon, who studied music with Rousseau’s granddaughter and gained access to his records and sketches, combines an over­whelming selection of first-class reproduc­tions of Rousseau’s finished paintings (far more than one can see in the collections of the major museums in America and Paris) with a seemingly comprehensive presenta­tion of Rousseau’s sources: postcards, works of various masters, newspaper etchings. With most painters (Picasso especially), the juxtaposition of masterpiece and source robs the masterpiece of its authority; here, the effect is the opposite. Rousseau painted from ordinary and cliched representations of ordinary life and then overthrew them.

→ Roots of Radicalism: Jews, Christians, and the New Left, by Stanley Rothman and S. Robert Lichter (Oxford, 466 pages, $27.95). A chart-and-table-bound socio­logical study in which the argument is made that the supposed overrepresentation of Jews in the New Left of the 1960s can be traced to the desire of sociologically marginal types to make everyone else feel estranged from the society the marginals cannot join—in other words, misery loves company, not to mention revenge. Cold and repellent, the book can be expected to attract much attention, if only because its argument neatly disposes of the notion that there might have been anything seriously amiss in the society the marginals pretended to want to change.

→ Greetings From L.A.: A Visit to the City of the Angels in Postcards, by Kerry Tucker (Steam Press, 111 pages, $8.95 paper). A capsule history from the 1886 L.A. Times building (bombed 1910) to the floating South Central Coca-Cola building (restored 1976). The perfect last-minute Christmas present.