My all-time favorite manifesto is the “Manifesto of the MX Missilists,” issued September 8, 1980. “All passeist, immobile, fixed-launcher guided-missile systems present such a monstrous spectacle of backwardness and obsolescence that our MX Missilist eyes turn away with profoundest disgust and contempt!” the Missilists announced. And, they declared, “We shall go further. We are prepared to argue that stasis itself is dead. For if missiles should be placed upon cars, and those cars upon tracks, to move hither and thither in response to the universal urge to avoid nuclear annihilation, why then, 0 asinine compatriots, should not hospitals be so emplaced?”

Neatly anticipating the arrival of the Reagan administration, this Futurist shout, published in the New Yorker by Ellis Weiner, was less a parody than an update, despite the fact that it reads like a bad translation from Italian. Futurism cannot be parodied. That was its strength and its purpose—to go farther in affirmation or denunciation than anyone could ever possibly go in response. The Futurists knew how ridiculous they sounded—and they knew that when you registered your reasonable dissent the joke would be on you. For instance, Giacomo Balla’s 1913 “Futurist Manifesto of Men’s Clothing”:

WE MUST DESTROY ALL PASSEIST CLOTHES, and everything about them which is tight-fitting, colorless, funereal, decadent, boring and unhygenic. As far as materials are concerned, we must abolish: wishy-washy, pretty-pretty, gloomy and neutral colors, along with patterns composed of lines, checks and spots. In cut and design: the abolition of static lines, all uniformities such as ridiculous turn-ups, vents, etc.

WE MUST INVENT FUTURIST CLOTHES, hap-hap-hap-hap-happy clothes with brilliant colors and dynamic lines. They must be simple, and above all they must be made to last for a short time only in order to encourage industrial activity and to provide constant and novel enjoyment for our bodies.

Which is to say that manifestos are fun. They’re fun to write and often they’re fun to read. They’re fun to clock with complete disbelief. It’s fun to go back to a line that stood out from the spew (“Poetry must be conceived as a violent attack on unknown forces”; “Barely maneuvering between truth, beauty, and the police station”; “Man is a curious body whose center of gravity is not in himself”; “You might, at least, keep quiet while I am talking”), and then to start over to see what you missed in the torrent of noise, speed, bluff, and megalomania, in the whispers of seduction, entrapment, bribery, and private jokes. All that is present in Manifesto, edited by Mary Ann Caws, professor of comparative literature at the City University of New York and author of, among other books, The Surrealist Look: An Erotics of Encounter. What results is a playground, full of cliques, bullies, games, and, most of all, competition. 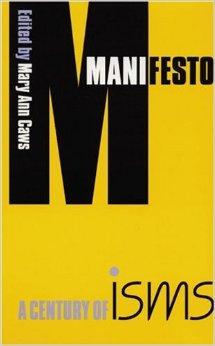 Buried under the grass is an 1836 Russian sound poem; way over by the fence is a 1996 American treatise on architecture. Nobody pays any attention to those things. Most of the action, you’ve learned in class, was in Europe in the first thirty years of the twentieth century, and the whole game was to get the word out before all the rules changed—before fascism, Stalinism, the Depression, the next war. So you swing on the steel bars of the Russian Futurists’ 1912 “Slap in the Face of Public Taste” (“He who does not forget his first love will not recognize his last”), hang around Le Corbusier and his 1920 buddy Amedee Ozenfant (“The work of art is an artificial object which permits the creator to place the spectator in the state he wishes; later we will study the means the creator has at his disposal to attain this result”) until deciding they’re really creepy, join the Rayonists’ 1913 face-painting gang (“It is time for art to invade life. The painting of our faces is the beginning of the invasion. That is why our hearts are beating so”), all before getting home in time for supper, doing your homework, and not falling asleep.

It’s three in the morning and you can’t get what Ilya and Mikhail were saying out of your head. It seemed new; it seemed like behind all the come-on-join-our-club stuff they knew how to get to the hole at the center of the earth.

We, creators, have nothing to do with the earth; our lines and colors appeared with us. If we were given the plumage of parrots, we would pluck out their feathers to use as brushes and crayons.

If we were given immortal beauty, we would daub over it and kill it—we who know no half measures.

We paint ourselves for an hour, and a change of experience calls for a change of painting, just as picture devours picture, when on the other side of a car windshield shop windows flash by running into each other: that’s our faces.

“Those who make a revolution by halves,” St. Just said at the height of the French Revolution, “only dig their own graves.” The writers of art manifestos—those that still communicate in their own voices—understood this with the instincts of the twentieth century, taking up the unfinished revolutions, political, aesthetic, and technological, of the century before.

A manifesto, then, was an extremist declaration that what should be will be, combined with an assertion that what has been will be consigned to the dustbin of history, if it’s not there already. The manifesto is absolutist, as the Rayonists, in one of the great coups of Caws’s research, make plain. Despite the likes of Kasimir Malevich’s 1927 admission that, “Even I was gripped by a kind of timidity bordering on fear when it came to leaving ‘the world of will and idea,'” the manifesto raises doubts only to banish them as weakness, sterility, corruption. In its insistence on the complete and instantaneous transformation of art, of the city, of the world, the manifesto catches the echo of medieval yearnings for the beginning of a new world in the destruction of the old, the wish traced so dramatically in Norman Cohn’s 1957 The Pursuit of the Millennium—which placed such heresies as those of the Brethren of the Free Spirit and the Anabaptists at the root of twentieth-century totalitarianism. In that sense the artist’s manifesto is totalitarianism’s good twin: good, perhaps, only because those who issued manifestos rarely got their hands on the power to do what they said they were going to do.

Though the manifesto sets itself against any sign of liberalism, tolerance, or compromise, that stance is partly a pose. Caws acknowledges The Communist Manifesto as a historical anchor, but not the Declaration of Independence, the Declaration of the Rights of Man and of Citizens, or Emile Zola’s “J’Accuse.” And so it is both odd and, unfortunately, no surprise that save for a brief, ghettoized section on black identity and feminism, Caws excludes from her compendium any manifesto in which art and politics, aesthetics and the use of power, come together as one. This is a fundamental tradition not only of the manifesto, but of the twentieth century itself.

The omission of the Berlin Dada Club’s incipiently fascist 1918 “What Is Dada and What Does It Want in Germany?”—which demanded control over both sex and entertainment—leaves a gaping hole in Manifesto. One can hear other silenced voices, among them the 1925 Surrealist petition “Revolution Now and Forever!”; the Situationist International’s 1965 “The Decline and Fall of the Spectacle-Commodity Economy,” in which the Watts riots were presented as a “critique of urban planning”; and Georges Bataille’s 1933 “The Notion of Expenditure.” There are countless more.

The playground in Caws’s book, then, is a wonderland, with hairpin turns on the twisty slide and swings that go so high you don’t believe you’ll ever come down (see Stephane Mallarme’s 1897 “A Throw of the Dice Will Never Abolish Chance,” that rare manifesto in which you can actually feel the writer’s own delirium). But it is, despite the bow of its subtitle to the previous century, a very twenty-first-century playground: no guns allowed, not even toy guns.