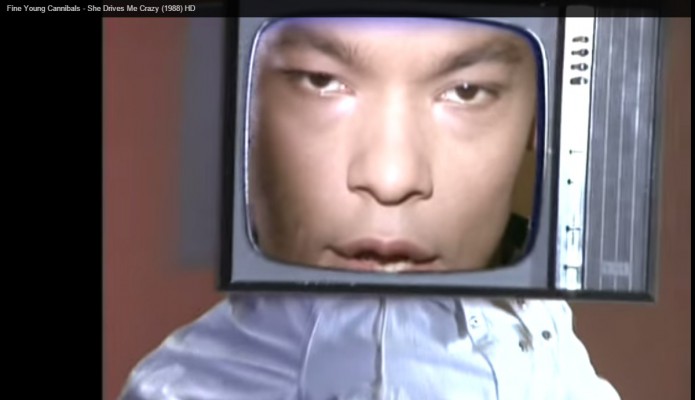 1. Fine Young Cannibals, “She Drives Me Crazy” (I.R.S. 12-inch)
General Johnson (“It Will Stand” with the Chairmen of the Board) fronting Hot Choco­late (“You Sexy Thing,” “Every l’s a Winner”)—well, not exactly, but they have HC’s feel for rhythms that disguise their hardness, and like GJ Roland Gift has a voice so determinedly eccentric he could never be mistaken for anyone else. This moves slowly, all muscle, until after a minute or two every change signals a release that Gift always returns to half-deny, a sweetness he can’t accept. There are more words to this song than “She drives me crazy [doot-doot]/Like no one else/She drives me crazy [doot-doot]/And I can’t help myself,” but there don’t seem to be, and there don’t have to be.2. Elvis Costello, “Leave My Kitten Alone,” on Late Night (NBC, March 3)
Who else would be so unprofessional as to waste three minutes of network time with an unreleased Beatle tune when he could have been advertising his new single? Who else would be so professional as to respond to “How do you write your songs?” with an answer that nailed a Spike track in your mind more surely than the song itself?3. Saints, “Grain of Sand,” on Prodigal Son (Mush­room/TVT)
A new wrinkle on Demosthenes: after 12 years, Chris Bailey sings as if that sand is in his throat, as if singing is the only way to keep it from turning into a pearl. He was a punk, after all.4. Chuck Russell, director, The Blob (RCA-Columbia video)
For the scene where the yo-yo spinning projectionist gets blabbed. Someone comes into the booth to find out why the film has broken, then he looks up at the ceiling and sees a hideous face screaming silently out of the slime—and the yo-yo, dangling from what used to be a hand, still running up and down, perfectly.

5. Henry S. Kariel, The Desperate Politics of Post­modernism (Massachusetts paperback, $11.95)
Most books with “post­modernism” in their title are once-removed frog-speak: Americans trying to squeeze a drop of insight or prestige not out of the world but out of Lyotard or Baudrillard, and with all the charge of a bad game of Scrabble. Kariel, of the University of Hawaii, writes in his own voice, and the desperate politics of his title are his politics. His arguments seek a thin cultural margin where he believes the possibilities for new kinds of speech and action are still alive. Whether or not Laurie Anderson, among others he talks about, is mapping that line, this book, as Charles Perry once wrote, about what I don’t remember, is like finding a hamburger in a medicine cabinet.6. Eddie Murphy, producer, Thomas Schlanne, di­rector, What’s Alan Watching?, pilot (CBS, February 27)
Alan is a teenager with a TV in his room; the show is based on the premise that changing channels is the primary cultural—no, social—experience of our time. Of all the wonders Alan turned up this night, most bizarre was footage on James Brown’s incarceration: not, it seemed, as news, but as instant movie-of-the-­week. Murphy played Brown, of course (also a “Free James Brown” James Brown clone); the bit was shocking both as a violation of decency and as a violation of media temporality. Alan didn’t seem to know who James Brown was; I can’t wait to see how Almost Grown follows up. On TV, generational fiction is now the milieu that counts; any real TV movie on James Brown is already irrelevant.7. Tone-Loc, “Funky Cold Medina,” on Loc-ed After Dark (Delicious Vinyl /Island)
There’s more to this L.A. rapper than “Wild Thing.” His timbre is odd tone, and it can tell a story.

8. Bobbie Ann Mason, Love Life—Stories (Harper & Row, $17.95)
Tales of mall-dwellers, in which changing channels is only apparently the primary social experience of our time.9. Johnny 0, “Fantasy Girl” (Micmac 12-inch)
Dream lover, where are you?

10. Jerry Garcia, guitar on “Slow Train,” on Dylan and the Dead (Columbia)
This is a horrible album. When “All Along the Watchtower” starts, even though the backing is country-thin (listen to what the Band did with it on Before the Flood), you think the melody is so dramatic nothing could break it; then Dylan, sounding too much like Elvis in his final “Are You Lonesome Tonight?,” does the impossible. But there’s an uncanny splendor in Garcia’s rote “Slow Train” break; I know I’ll never play the record again to hear it, and smile every time the radio gives it back.