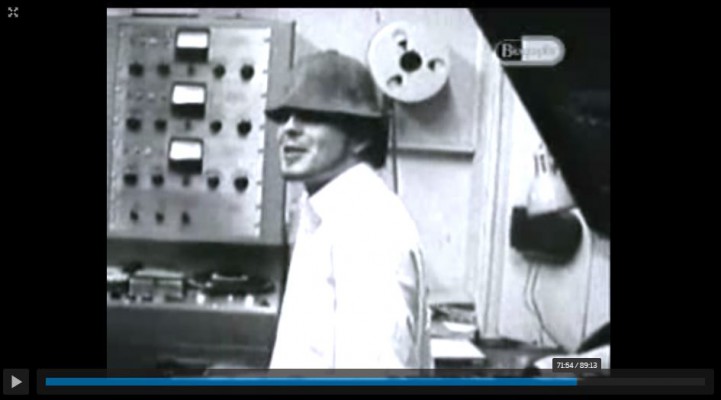 1. Handsome Family, Twilight (Carrot Top)
As he sings the words Rennie Sparks has written, the fatalism in Bret Sparks’ voice now comes in a deeper drone than ever before. He sits in a diner watching the crowds gather across the highway. He tells you why. It’s a terrible story, but for the moment the way he’s telling it is worse: Is he even alive? That one song later he turns up living in a park is no shock. But “I Know You Are There” is a shock. Enveloping the stalker in the lyrics, walking right over the suicide who’s singing, is the voice of another singer, crawling out of the others and leaving their bodies by the road like old clothes: a man speaking in waltz time the way you might imagine a president late in the l9th century would deliver a patriotic address. It all feels right, clear, heroic, simple, everyday.2/3. Terry Zwigoff, director, Ghost World (United Artists) & Ghost World: Original Motion Picture Soundtrack (Shanachie)
Clomping in her Doc Martens, Thora Birch as self-consciously outsider high school graduate Enid finds out what’s on the other side of outside when she lets Steve Buscemi’s old-timey culture fetishist Seymour sell her an LP at a garage sale. As the warped vinyl spins on her little box—and you can pick up the whispery sound of the warp on the soundtrack album—she hears Skip James’ 1931 “Devil Got My Woman,” hears the high, otherworldly voice from Mississippi promising “Nothing but the devil, change my baby’s mind,” believes it, and, lying back, staring at the ceiling, rises only to put the tone arm back on the same track, all night long.Missing Britney Spears’ “Oops!… I Did It Again” and the Backstreet Boys as examples of the “horribly contrived commercial slop” Zwigoff couldn’t afford (“I wanted this music to heighten the alienation and fit into the general feeling of paranoia and cynicism I was attempting to create”), the soundtrack offers surprises: Mohammed Rafi’s “Jann Pehechaan Ho,” the fabulous rock ‘n’ roll dance number from the 1965 Indian film Gumnaam that’s running on Enid’s TV as the movie opens, or “Pickin’ Cotton Blues.” In a sports bar, after a legendary ancient black bluesman has been ignored by the crowd, a young white trio comes on, announcing it’s going to jam on the real authentic true-life Delta sound, then leaps into a ridiculous number written by Zwigoff, which doesn’t come off as remotely so awful as it’s supposed to.What does: the end of the film, when, with both Enid’s life and his in shreds, Seymour speaks earnestly to his therapist, hoping he’s turned the corner, that he won’t have to see her anymore. “Let’s start with that next week,” she says. He leaves, and as the therapist closes the door her face falls in disgust.

4. Bobbie Ann Mason, “Three-Wheeler,” from Zigzagging Down a Wild Trail (Random House)
A woman has let two vaguely threatening young boys talk her into letting them clean up her yard; Mason slides her down the situation until it opens into what’s really on her mind.

“‘How much dirt have you boys moved? I’m not paying you for Sunday-school lessons.’
“‘We need your riding mower to pull our wagon, so it’ll be faster.’
“‘That’s silly.’
“‘We can make twice as many loads.’
“The idea tempted her. She could get the mower out. She had filled it with gas before the yard-man’s two-hour visit. A two-hour yard man ought to be twice as good as a sixty-minute man, she thought, remembering the raunchy old song. She always thought it should be the theme song for Sixty Minutes. Her mind was flying around loose.”

5. Alison Kraus & Union Station, New Favorite (Rounder)
Not only does she continue to get thinner and blonder with each new release, now the accompanying photos have her braless in a red lace top and hanging out in a diner with her all-male band—yes, we get the idea. When the songs are good she continues to drift away from whatever’s obvious in a tune, but the numbers that might stick hardest—Bob Lucas’ “Momma Cried,” the traditional “Bright Sunny South” and “The Boy Who Wouldn’t Hoe Corn”—are sung by guitarist Dan Tyminski, perhaps best known, or unknown, as the voice George Clooney lip-synchs for “Man of Constant Sorrow” in Oh Brother, Where Art Thou? Sounding weathered and beefy, he relaxes into the age of the songs, shakes hands with Dock Boggs, then disappears back into the band like a trick of the light.

6. Morgan Neville, writer and director, “The Hitmakers: The Teens Who Stole Pop Music,” in “Pop Goes the Music Week” (Biography, A&E, Aug. 27)
In a dream tour of the Brill Building, you saw a lot of stories about assembly-line songwriting and the invention of the girl group told as they’ve been told before, though they’ve never been told better. What you hadn’t seen before: Mary Weiss-Stokes, lead singer of the Shangri-Las, her hair still straight and blonde, her eyes fiery through wire-rimmed glasses, speaking with pride and dignity of how, 35 years ago, she put everything she had and more into “Remember (Walking in the Sand),” “Leader of the Pack,” and “I Can Never Go Home Anymore”—and then Shangri-Las producer and songwriter Shadow Morton, who as he looked back seemed to be looking around corners. He was Mohair Sam: as a smile played on his lips, behind tinted glasses his eyes were lying even when his tongue told the truth. Weirder: Biography host Harry Smith, looking too much like the high school principal and secret rock ‘n’ roll demon Michael Ironside played in the great Hello Mary Lou: Prom Night II.

7. World Trade Organization/International Monetary Fund/World Bank/Group of Seven, Junichiro Koizumi Presents My Favorite Elvis Songs (BMG Funhouse)
The super-cool, super-popular, super-nationalist prime minister of Japan wants it known that Elvis’ voice “eases my fatigue,” that “these days, I feel a sort of healing power from his gospels,” and that he and Elvis share the same birthday. For the cover of Presents, he’s digitally posed right next to the Big E circa 1956, looking for all the world like a Washington tourist posing next to a life-size cutout of an American president. The song selection—which does not include “King of the Whole Wide World,” but which does include “Are You Lonesome Tonight,” Boris Yeltsin’s favorite Elvis song—is true fan’s work. With “Wear My Ring Around My Neck” the closest thing to a rocker, which is not very close, the Big J goes for such glorious but ignored ballads as “I Was the One” (flip side of “Heartbreak Hotel”), “Don’t” and “You Gave Me a Mountain,” not to mention the Martin Luther King Jr. tribute “If I Can Dream,” “Can’t Help Falling in Love,” and “Hawaiian Wedding Song.” So where’s the karaoke disc?

8. Randy Newman, “The Beehive State,” from Randy Newman Creates Something New Under the Sun (Reprise, 1968)
Given Salt Lake City’s purchase of the 2002 Winter Olympics, this song is sure to get more airplay than it’s ever had before, which is none: as the singer says, speaking to the nation and sure he will never be heard, “We gotta tell this country about Utah, because nobody seems to know.” Which may not change: as San Francisco Chronicle sportswriter John Crumpacker put it on Sept. 7 in his “Olympic Beat” column, “Utah is known as the Beehive State for the archaic hairdos worn by waitresses in time-warp coffee shops.”9. Old Time Texas String Bands, Volume One: Texas Farewell (County)
Opening with Jim Tate’s high-stepping 1929 title tune, the set makes it to the back room of the worst bar in Dallas by the fourth cut, the 1928 “Blues in the Bottle” by Prince Albert Hunt—a sometime blackface fiddler who was shot to death at the age of 30 for stealing another man’s wife. He growls through dirty teeth, rolls on the floor, punches his fist through his stovepipe hat, passes out, gets up, falls down, and after every verse kicks up a dance-call with a single down-stroke so fat and sweet you’re ready to hire him to clean up your yard.

10. George W. Bush, “Address to the Nation” (Sept. 11)
“The American economy will be open for business,” he said. In his brief, poorly written speech there was no empathy, no outrage, only a nervous attempt to project competence, to assume his own legitimacy, but behind the big desk he grew smaller with every word. Compared to this Rudolph Giuliani seemed like Churchill.