Tony Sanchez’s sex-and-smack exposé, Up and Down With the Rolling Stones: The Inside Story (Morrow, 310 pp., $895, paperback, illustrated), is well-timed, though Elvis: What Happened? still holds the prize. Keith Richards, Sanchez’ former employer and the book’s main subject, did not, as did Elvis, drop dead more or less on publication day. But Anita Pallenberg—Richards’ common-law wife and mother of his children—is almost as central to Sanchez’ tale. Only days before excerpts from Up and Down began to appear in the nation’s newspapers, Pallenberg somehow managed to position herself on a bed in Keith’s suburban New York house, right next to a seventeen-year-old boy who, after picking up a hot .38, blew his brains out “in a game of Russian roulette.”After reading Up and Down, one can respond to such an incident only with a tired “Oh well.” Sanchez fills page after page with accounts of wrecked cars, shooting accidents, near-fatal over-doses, drug-drought panics. He confirms every unpleasant rumor you’ve ever heard about the Stones (Keith’s Swiss blood changes are set forth in great detail) and adds plenty of bad news that hasn’t surfaced before. Lots of people in the Stones’ orbit turn up dead long before Sanchez nails down his last page—or, it seems, before the Stones notice they’re missing. 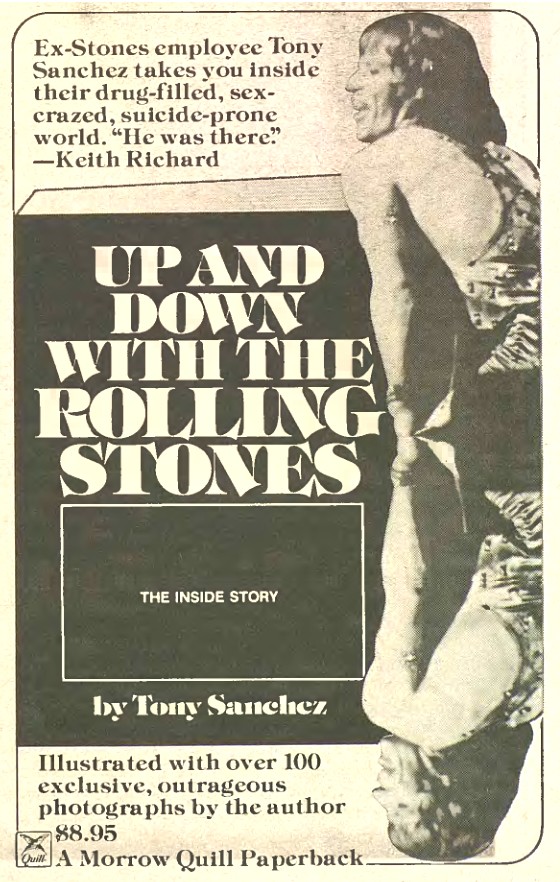 Up and Down is a very ugly book, but its ugliness consists not so much in what happens but in how those who are involved manage to ignore what happens. Marianne Faithfull turns to heroin to cope with Mick’s disinterest, but he doesn’t want to know about it; Marshall Chess, then head of Rolling Stones Records, begs for help after shooting bad heroin, but Keith hangs up on him. As a joke, Keith tricks a young journalist into snorting smack—and if the kid shows up months later, addicted, pleading for junk, well, that’s only rock & roll, right?

There will always be enough money to hire someone else to do the dirty work; there will always be enough fools to silence any scandal with their applause. When a lover has outlived her usefulness, or a band member has outlived his, she or he can be cast off like carrion, and the fans, barreling down the highway with “Brown Sugar” on the radio, will hardly feel the bump when they pass over it.

Up and Down is not a very good book. The writing is bad, and it takes writing on the level of Mezz Mezzrow and Bernard Wolfe’s Really the Blues or Billie Holiday and William Dufty’s Lady Sings the Blues to make a junkie’s life interesting, even if the junkie is a Rolling Stone. There are plenty of inaccuracies. Sanchez clearly has no idea what went on at Altamont (“Doctors were kept busy delivering babies to girls giving hysterical premature birth,” he writes, but there were no babies born at Altamont); a clue to the trustworthiness of Sanchez’ whole story may be the fact that he finds it necessary to exaggerate the violence of the most violent day of the Stones’ career. Still, most of Sanchez’ stories are all too convincing—the book rings true most of the time. The real problem with Up and Down with the Rolling Stones is that it makes the Stones’ music incomprehensible. The connections between lives of sybaritic corruption and recordings as vital and deep as “Gimme Shelter” or as funny and passionate as Some Girls—connections Richards and Jagger had to draw on or transform—are missing.

Those connections are present—burning—in the pages devoted to the Stones in Guy Peellaert and Nik Cohn’s Rock Dreams, pages that spell out with lurid clarity just how much energy the Stones derived from placing themselves as close as they could get to the most dangerous and wasteful fantasies of their time. One picture in particular sticks in the mind: Anita Pallenberg, her sexual aura so intense you half-want to turn away, looking straight into the drugged and drunken eyes of Jagger, Richards and Brian Jones. This, says the picture, is the woman the Stones sought, who they chased down in their songs, but who, once found, they could not begin to match—the woman they had to escape even if they could not bring themselves to leave her sight—and it’s the sort of tension this image holds that makes sense of the Stones’ work over almost two decades.

As she was photographed last month, after the shooting in New York, Anita Pallenberg looked very different. She was the image of every man and every woman’s worst fear of what they could become: fat, bloated and ruined—not simply to excess but beyond recognition, not simply beyond sex but beyond gender. She seems likely to be remembered, if she is remembered at all, as just one more cast-off; one more woman, who even after nearly fifteen years could not penetrate to the secret place where Mick and Keith kept the most closely held drug of all: the drug of invulnerability. The Stones’ music, rich as it remains, may be that drug, but it does not make sense of the image Anita Pallenberg now presents; Tony Sanchez’ book, sleazy and self-serving as it may be, does.