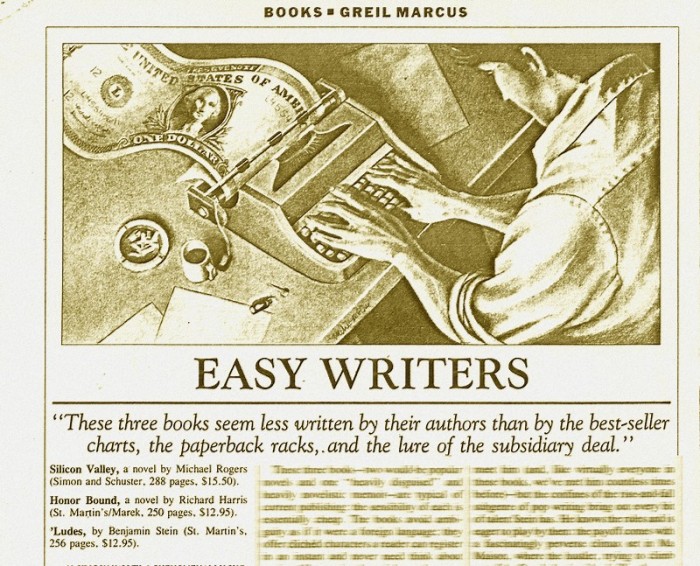 In Silicon Valley, a phenomenally successful but financially troubled computer company stakes everything on the first full-scale attempt to demonstrate a machine that can simulate human intelligence. In Honor Bound, a New York attorney who has seen his best friend and mentor disgraced and driven to suicide by the man’s vicious wife and her lawyer/lover abandons his faith in the law and sets out to take revenge. In Ludes, a young New York hustler and his wife arrive in Los Angeles to make a fortune in real estate tax shelters, only to fall into drug addiction when the bubble bursts. Michael Rogers, the author of Silicon Valley, is a first-rate science reporter who has also published excellent short stories. Richard Harris, the author of Honor Bound, is a former New Yorker staff writer and perhaps the finest legal reporter of our time. Benjamin Stein, the author of ‘Ludes, is a self-satisfied moralist known for a few crummy novels and a right-wing attack on television programming. Yet only ‘Ludes is worth reading.

These three books—two would-be popular novels and one “heavily disguised” and heavily novelistic memoir—are typical of current publishing: the sensibility of each is essentially cheap. The books avoid ambiguity as if it were a foreign language; they offer clichéd characters a reader can register in an instant and never need think about again. All are aimed straight at the mass market—at the best-seller charts, paperback racks, and subsidiary deals (Honor Bound has a major ad campaign behind it, ‘Ludes has a six-figure paperback deal and a movie option, Silicon Valley has Rogers’s first gratuitous sex scenes and his first cartoon characters)—and all seem written less by their authors than by the whole amorphous genre of pop fiction itself.

The reason ‘Ludes is convincing where Silicon Valley and Honor Bound are embarrassing may be that while Stein is comfortable with pop idioms, actually likes them, Rogers and Harris seem ashamed of them; they’re consciously writing down where Stein is trying to capture his subject, the ruin of a friend. Stein’s portrait of nihilistic hedonism in Los Angeles goes no deeper than did Woody Allen’s in Annie Hall, but there is real loathing behind it: you can sense Stein’s desire to get his picture across, and his suppressed rage brings scene after scene to life. There are no real surprises in ‘Ludes—the hustler’s fate is sealed from the moment we meet him (and, like virtually everyone in these books, we’ve met him countless times before)—but the confines of the rise-and-fall subgenre of pop writing bring out every bit of talent Stein has. He knows the rules and is eager to play by them: the payoff comes with a fascinatingly perverse climax set in Ma Maison, where the hustler, trying to climb out of the Quaalude pit with a brilliantly conceived deal, helplessly blows every chance he has with the inevitability of a marksman shooting tin cans off a fence.

There is one interesting character in Silicon Valley, an anorectic, hermitlike woman who creates “computer novels,” complex programs in which the duration and direction of the story depend on the response of the “reader” to the possible plot choices the story offers—but it’s just that sense, of open possibility, the sense that Rogers’s own story could break in different ways, that’s missing from his novel. Rogers marshals his scientific knowledge and, more productively, his flair for scientific speculation (the one memorable scene involves an outdoor concert of computer music, in which the machine has been used to enlarge the human voice to godlike scope), but both get lost, because you can believe the people in the book only if your acquaintance with the human species has been limited to other examples from popular fiction. The futuristic plot collapses back into familiar soap opera: the great test of the “thinking” computer turns out to be a bad joke for the reader as well as for the men who have set it up, and a red herring to boot. One is left with little more than just another inch-thick look at success and fantasy in California. A few interesting notions about new technology can’t save a book when the reader is most of all aware of a writer going through the motions the market has mapped out for him.

Michael Rogers has missed a beat in a career that will surely produce better things, but Richard Harris has fallen to pieces. In Justice, a classic account of the Senate’s rejection of the nomination of G. Harrold Carswell to the Supreme Court, Harris wrote as a man whose respect for American institutions had been tested, and confirmed. His next book, Freedom Spent—reports on four cases in which the Bill of Rights ran head­long into the lack of political education necessary to sustain it—was suffused not with pride but with bitterness, as if Harris had concluded that the founders’ experiment in free political life was simply doomed. His next book was a second-class thriller.

It has to be emphasized that these characters are defined solely by their stereotypes: no other dimension of character exists. The moronic black comes off the page as moronic because he is black and black because he is moronic. This is fiction at its low point, and Harris writes as if he knows it—as if he can’t wait to wash his hands of his own work. Is this man, who once wrote important books, just trying to write a commercial murder mystery? To cry out in anguish at the corruption of the country? To admit that the mindless bigotry he stood against for so many years was there inside him all along? Who knows? And who cares?

These three books are cheap because the question of how a writer will shape his material, of how an obsession with a subject will shape a writer, is never at issue. I was caught up by ‘Ludes, but it won’t stay with me; I felt merely used by Silicon Valley and Honor Bound. “The rich text resists its author as well as its readers,” it has been said; the texts here exist only to be manipulated by their authors and to manipulate their readers.

The Goddesses and Gods of Old Europe, 6500-3500 B.C.: Myths and Cult Images, by Majira Gimbutas (University of California, 304 pages, $14.95 paper). This magnificent and accessible work of scholar­ship by Professor Gimbutas of UCLA defines the contours of a civilization unknown to the general public: the unitary and autonomous culture of southern Italy, Greece, and the Balkans, which was vir­tually destroyed by invasions of patriarchal Indo-Europeans in about 4000 B.C. The Indo-Europeans have dominated Western history ever since; the civilization of Old Europe survives as myth and in a collective un­conscious. In a close and illuminating analysis of the many aspects of the Mother Goddess and the related male consort and divine child, Gimbutas leads a reader through the statuettes—many of them shockingly “modern” in form—and pottery art that testify to the flowering of a complex culture organized around the apprehension of a life spirit rather than the hegemony of gender. There are more than 400 illustrations, 252 of them well-reproduced photographs; there is also the sense of exhilaration a reader can gain from the work of a scholar who has plunged into unknown territory and returned with unimaginable treasures.

Off the Wall Street Journal edited by Tony Hendra ($2, available at newsstands and bookstores). This facsimile parody of the WSJ is remarkable not just because it is hilarious, but because it is completely sustained through 24 full-size pages—through every story and every fake ad. Most disturbing is a two-page spread advertising the United States of America as one of those hopefully developing nations that take out special supplements in the Sunday papers (it even reads as if it were badly translated from Tagalog); most gratifying is that the paper is less a parody of the WSJ than a killing satire on Reaganomics pure and simple. No one has so perfectly caught Reagan’s robber baron philosophy or the Dickensian results it means to produce. Amid the gleeful reports on the Coca-Cola Company’s mistaken purchase of Columbia Pictures (Coke thought it was buying a country) and a running debate on the meaning of “debenture,” there is a single note of hope, attributed to bearish Wall Street prognosticator Henry Kaufman of Salomon Brothers: “The only prospect is for a cold, dark night crowding out our spirits and souls in an unshakable grip of agony, defeat, and despair… We are but vile beetles crawling across a putrid landscape of poison and death.”

Square Dancing in the Ice Age, by Abbie Hoffman (Putnam, 242 pages, $14.95). “He lives in, and loves, America,” gurgles the dust jacket, but this collection of pieces writ­ten while the ex-yippie was hiding out from a drug-dealing rap merely proves that, under­ground or not, Abbie Hoffman lives for, and only for, the spectacle of his own celebrity. It’s no matter that Hoffman has a reputation as a “progressive”; that’s his hustle, just as teary righteousness is Norman Lear’s. The most famous piece in this book—in which Hoffman details how, masquerading as a Playboy food critic, he ate for free at Europe’s greatest restaurants—shows Hoffman up for the craven fraud he is. “I came to appreciate the expertise of these master chefs,” Hoffman says in his typically wooden prose. “The ultimate pop artists who carve and cook with total commitment, creating a work of exuberance only to be instantly consumed by strangers. Men, and in one case, a woman, who manage to work an eighteen-hour day yet still maintain the urge to continually experiment.” None of which, of course, kept Abbie Hoffman from stealing from them.