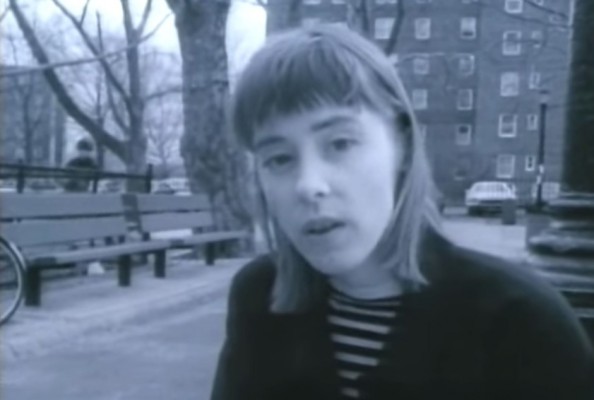 1. The Mad Peck, Mad Peck Studios—A Twenty-Year Retrospective (Doubleday)
The adventures of a band of comic-strip rock critics whose watchword is “It don’t mean a thing if it ain’t headed straight to cut-out heaven” (typical subjects include Donny Iris, the Idolmaker soundtrack, and the second Human Sexual Re­sponse LP), this picks up where Richard Meltzer’s The Aesthetics of Rock left off. Best concept: the “Inflat­able Meat Loaf Love Doll.” Best plot: faced with sky­rocketing doo-wop prices, a former member of the Five Royal-Keys hijacks a plane to come up with the money to buy a copy of his own 45.

2. Suzanne Vega, “Luka” (A&M)
Despite her insuf­ferable recitations and her coy way with words (tunes published by Waifersongs Ltd.), this woman isn’t merely a wilting flower to be pressed between pages of Tennyson. She’s also a natural hitmaker, Janis Ian ’87, and “Luka” does for wife-beating what “Society’s Child” did for racism. Better, Vega can make her singing seem like real talk: skirting a good melody and ignoring a bell-ringing guitar solo, her phrasing is so naturalistic it sounds as eerie as the female vocal in Human League’s “Don’t You Want Me.”3. Elko Ishloka and Arata Isozaki, “Performance” in­stallation, Tokyo: Form and Spirit (San Francisco Mu­seum of Modern Art)
Sixty video monitors were playing a loop of Japanese TV commercials in a mock-up of a Shinto temple (“Church of the Media,” or “Shrine of the Commodity,” or something). On came two pastel Godzillas, apparently a happily married couple, carrying coffee cups on a stroll through the suburbs, over which they towered like upright dirigibles, and then Debbie Reynolds poked her head out of the sound­track: “I hear the cottonwoods whisperin’ above/Tammy, Tammy, Tammy’s in love.” It turned out to be an ad for Live Beer. 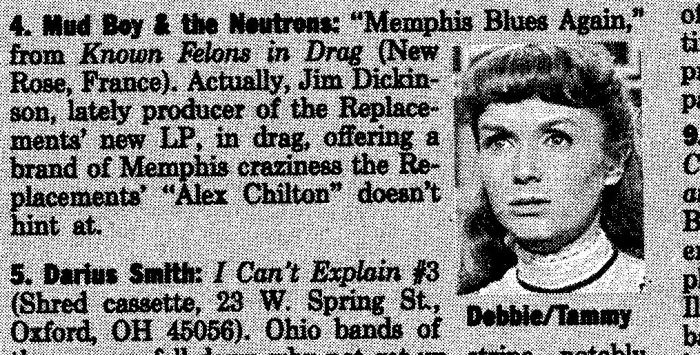 5. Darius Smith, I Can’t Explain (Shred cassette, 23 W. Spring St, Oxford, OH 45056)
Ohio bands of the so-you-fell-down-why-not-get-up stripe, notably the female Manwich, plus the Prom Sluts from Florida and Pussy Galore live in Cincinnati. “Mystery train issue/dedicated to the 1966 Beatles,” though both the Beatles and Elvis would be surprised.

7. Age of Chance, Crush Collision (Virgin EP)
In 1920, in Berlin, dadaist Richard Huelsenbeck called for an “art which has been visibly shattered by the explosions of last week, which is forever trying to collect its limbs from yesterday’s crash.” These guys don’t know, from art; they’re working on the crash.

8. Robert Hewson, Too Much—Art and Society in the Sixties, 1960-75 (Oxford)
What’s remarkable about this analysis of convulsed British culture is Hewson’s determination to take its most absurd manifestations seriously, and on their own terms. At a distance of two decades, such an approach necessarily misses the spirit of the era, and the book’s weakness is that it sometimes makes the still-incredible almost obvious. Over­-priced ($27.95, 350 pp.), but, essential; watch for the paperback.9. Beverly Paterson, Voices Green and Purple—A Comprehensive Guide of California’s Amazing Garage and Freakbeat Bands of the Sixties (Skylark Press, PO Box 6612, San Mateo, CA 94402, $5.95)
If you get enough records together, all of social history falls into place—or anyway in your lap. Remember the Velvet Illusions’ “Acid Head”/”Velvet Illusions,” where the band, which included one Steven Weed, “sang about how cool and admired they were”? No? Well, how about Patti Smith’s “Piss Factory,” backed with her rewrite of “Hey Joe,” where she celebrated the kidnapping of Patti Hearst by the Symbionese Liberation Army, which had to beat up Steven Weed to get Patty out the door and into the trunk? Does Steven Weed remember?* 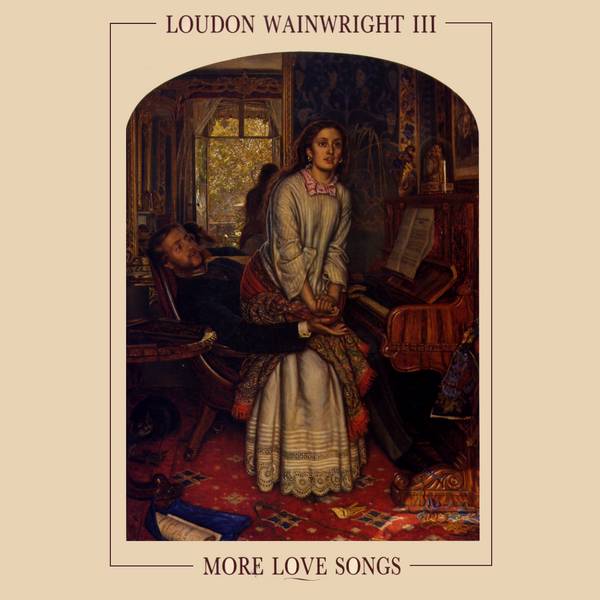 10. London Wainwright III, More Love Songs (Demon, UK)
Tired, but a far more believable account of the compromises demanded by feminism than Alix Kates Shulman’s gooey In Every Woman’s Life… Top cut: “The Back Nine,” a why-go-on ballad built out of golf metaphors. He’s still the only person who can make “whom” work as rock ‘n’ roll, and perhaps the first to try “middle-aged.”