Ten, eleven, twelve years after they made their first re­cords, what strikes me is the hardness in the best of them. It’s as if the Stones went after a sound they thought they heard in Chicago blues, Chuck Berry, early rock and roll, but in truth heard something else—heard what that music reached for and what it only implied—and went past their idols to a sound no one had really gotten before.

In the beginning, they got this sound with Andrew Loog Oldham’s need to master the pieces he particularly favored in any given number as loud as he could. He didn’t want a smooth balance; distortion excited him. You can hear him, on those early sides (from, say, the first album through “Satisfaction”), flipping the dials like a fan working the volume on a car radio; Oldham’s was the technique of a man who has no idea of what he’s doing but knows what he likes. So he jammed up bits and fragments, every one of them, I imagine, standing for what the name of the band must have meant to him. “Rolling stone” is perhaps the most potent metaphor in American music—its possibilities seem inexhaustible—and I think Old­ham cared only for the suggestion of hardness, something most versions of the metaphor, which concentrate on the suggestion of trackless movement, miss. In his sound, Oldham forced a feel for what couldn’t be penetrated or broken down—a note, a riff, a line, the way a melody turned, for anything that stood its own ground. That was all that mattered.This aesthetic is still the crucial artistic fact behind the music of the Rolling Stones. Heard Oldham’s way, long after he has been removed from the scene, the Stones have left a trail, made up not necessarily of their best records or of my or your favorite songs, but a trail made up of the moments in which the Stones have defined themselves. Inspired by Old­ham’s aesthetics, I played the records through one night, looking for that trail. Beginning with the first riff of the first song on the first album, I offer this map:

→ “Around & Around”: Keith’s guitar roll at the end, and, more than that, the way he rocks out of it.
→ “Empty Heart”
→ “It’s All Over Now”: The grandeur of the first notes of the lead guitar, and the unbelievable rush of momentum from the rhythm guitar—mixed up out of the roar—as Mick wraps up the vocal and tosses the song to the band to finish off as they like.
12 X 5

→ “Play With Fire”: The sly, cold curse. “Your mother, she’s a heiress, Owns a block in St. John’s Wood, And your father’d be there with her, If he only could…”
→ “The Last Time”: The end.
Out of Our Heads→ “19th Nervous Breakdown”: The first notes.
High Tide & Green Grass

→ “19th Nervous Breakdown”
Got Live If You Want It!

→ “Gimme Shelter”: The curling melody that opens it; the drumming; Mick’s harp; Keith’s tiny Chuck Berry riffs behind the early vo­cals; and his solo, his best.
→ “You Can’t Always Get What You Want”: Mick’s careful singing in the first verse; the lyrics.
→ “You got the diamonds… in the mines”
Let It Bleed

→ “Stop Breaking Down”: Ian Stewart’s piano & Mick’s squeaky harp; and Mick, pushing the band into chorus after chorus.
→ “Turd on the Run”: The rhythm.
Exile on Main Street

→ “Heartbreaker”: The shock in Mick’s voice—“Her mother said she had no chance, No chance!”
Goat’s Head Soup→ The change from “Ain’t Too Proud To Beg” to “It’s Only Rock ‘n’ Roll”: A rushed, smash-your-head-against-the-wall ending, dead silence, and then Charlie coming down with all he has—the sound mixed up as loud as it can go, a tiny homage to A.L.O.?
→ “Time Waits For No One”: “Time, Waits for no one, And it won’t, wait for me.”
It’s Only Rock ‘n’ Roll

Some conclusions. Early on, Charlie Watts, Keith Richards, and Brian Jones came up with the most unpredictable and essential music. What mattered was sound and flair, not “excellence” and certainly not the “professionalism” that studio musicians have brought to the Stones’ records of the last few years. Between The Buttons, usually considered the Stones’ most consistent album, turns out to be their most bland and conservative—it yields not a single point of interest on the map—while December’s Children, a rag-tag collection of early rejects and live cuts (Keith commented at the time the album was released that the Stones could never have gotten away with releasing such an atrocity in England) appears as one of the Stones’ most elemental records. Once Oldham has dropped from sight, Mick not only receives all the publicity, he lives up to it—he becomes the source of more and more of the band’s defining moments. He creates the present, and, along with Watts, maintains links with the band’s past. They remain the points around which the band turns. Wyman could be replaced—perhaps even Keith could be—but not Jagger or Watts.What is interesting about the “trail” left by the Stones’ self-defining moments is that it is circular; it brings the Stones’ past into the present, stripped down and devoid of the more trivial associations of time and place. This is to say a little more than that the music of ’64 and ’65 “stands up.” Listening to Eng­land’s Newest Hitmakers and looking at the cover—a simple group shot with a dark background—there seems not an iota of nostalgia in what that picture says. It does not provoke memories of Swinging London. The picture would be perfect, I imagine, if the world saw it for the first time ten years from now; it would look new. At the moment it simply looks right.

Brian Jones dominates this photo of the original five—not on first glance, perhaps, but the second time you look, and every time thereafter. The other four Stones look like pop-stars; but there is a gleam in Jones’ left eye—you can’t make out the right for the shadows—that is utterly appalling. He looks right through you; that narrow, hooded eye is bottomless. It absorbs the mystery one’s mind reflects back at the group each time one sees the picture.

Standing for the band, Jones could contain that mystery no matter what shape it finally took, that eye says; pay you back with interest. The Stones left him behind, but they still keep pace with his ghost. 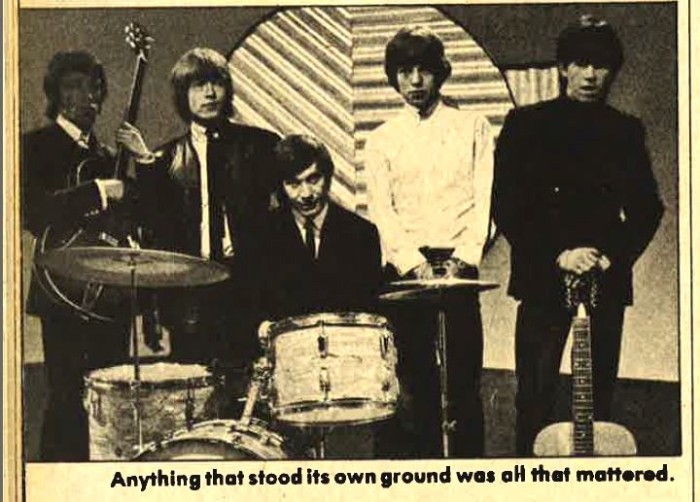