Out of the pages comes the cry of patriotism: a strangled cry sounding out like a bugle call. That’s the noise the two-issue comic book U.S.—Uncle Sam made in 1997. It’s the language Americans have heard all their lives, in the schoolroom, on the nightly news, coming out of the mouths of leaders and used to sell everything from cars to wars to books—that language now wrapped around your neck like a rope.

The premise of Uncle Sam was a paradox. The country may have betrayed every promise on which it was founded; that means the promises remain to be kept. That is not the way the story of the coun­try is usually seen. At the time Uncle Sam appeared, it was John Grisham’s legal thrillers that most directly addressed the question of the nation as ideal and fact, and they told the story very differently.

Beginning with The Firm in 1991, Grisham’s strongest novels all pointed toward escape. What made a typical 1990s Grisham hero was his or her willingness to flee, to leave it all behind: job, family, country. At their most radical, as with The Runaway Jury (1996) and The Partner (1997), Grisham’s books describe a national disease: a system of corruption that links public institutions, the law, corporations, and crime until none is distinguishable from the other, until the only choice a decent man or woman can make is to steal from thieves and disappear. The hero perpetrates a brilliant scam; reaps an unimaginable fortune; and abandons the United States for the gigantic fraud it has become. The hero takes up residence in a sunny place with nice beaches and loose, if any, banking regulations. The place may be just as corrupt as the United States, but it doesn’t pretend to be anything other than what it is. Its air may be as polluted as ours, but not with hypocrisy. There are no national fairy tales of innocence and good intentions, no comforting bedtime stories like the Declaration of Independence or the Gettysburg Address.

What the Grisham hero really leaves behind is illusion. In his or her place of refuge, the hero is at home in whatever racket it is that calls itself a nation because, there at least, no one is fooled. Nothing—no ties of affection, nostalgia, or familiarity, no shared beliefs in liberty, equality, or the greatness of Chuck Berry’s “Johnny B. Goode”—binds the Grisham hero to the land where he or she was born. In truth, except as a plot device, as a hall of mirrors for the hero to smash, in Grisham’s books the United States hardly exists at all. And, leaving aside the corruptions immediately preceding the Grisham era, and erupting as Grisham’s books followed one upon the other—the Nixon administration; the corporate state envisioned in Ronald Reagan’s Grace Report; the coup Reagan staged against his own government with the Iran-Contra conspiracy, as was said at the time in essence “Selling off one half of his foreign policy,” the insistence he would never negotiate with terrorists, “in order to finance the other half,” the overthrow of the Sandinista government in Nicaragua—the presence of the country in Grisham’s books as an absence creates a weird kind of thrill: see everything you ever believed in thrown away like a Big Mac box! 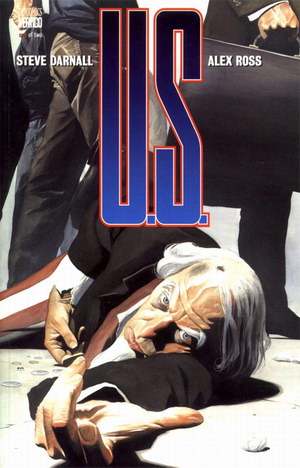 The same absence is the presence in Uncle Sam, written by Steve Darnall and illustrated and “coplotted” by Alex Ross. The thrill is different: the books are an argument not that the United States can be junked, but that it can’t be. Everything you ever believed is going to go up in smoke (“The dream is under fire,” runs one caption, “burning down from the inside”), but in Uncle Sam that smoke is the air you breathe. It doesn’t occur to the authors that there is anywhere else to go—or, given the gigantic contradictions of the truths and lies that make up the U.S.A., that there is anywhere else worth going.

An old man lies crumpled on a big-city sidewalk. He has thin white hair, a long, white goatee, and is dressed in a black coat and red-and­-white striped trousers. In the background, people pass on by: a man in a suit carrying a large documents case, two young men in jeans. There’s a fat, feeding fly on the old man’s smudged forehead. His left arm is stretched out toward you, almost off the edge of the page; his fingers are curled like a beggar’s. He looks you right in the eye; his own eyes say he lies on the pavement not to ask for what you’ve got but to judge how you got it.

He’s taken to a hospital (“Walks right into the hotel restaurant and begins assaulting the… uh… the Savings and Loan guy,” an orderly says), then put back on the street. He starts walking—out of the city, and straight out of time. In the course of his travels, the man will find himself in slave ships and jails, modern political conventions and lynch mobs. He’ll watch dumbfounded as for a moment a bearded politician turns into Abraham Lincoln. He will visit American killing fields: the battlefields of the Revolutionary War and Shays’s Rebellion, the Confederacy’s Andersonville concentration camp, the 1832 Illinois massacre of the Blackhawks by the U.S. Army, then a century later the deadly attack by police and hired thugs on striking auto workers in Dearborn, Michigan. All these sights and countless more—rendered in Die Hard scale, with big-screen, big-budget drama, heroic perspectives, and frames squeezed for the intensity of a tight close-up—leave the old man desperate and confused, except when his terror turns into comedy. He’s half Charlie Chaplin’s hideously disheveled tramp in the last shots of the 1931 City Lights, breaking down in shame under the gaze of a well-dressed young woman, half Joel McCrea’s movie director in Preston Sturges’s Sullivan’s Travels ten years later, living as a railroad bum to research his social protest picture “O Brother, Where Art Thou?” then finding himself under arrest and shocked when the magic words “Don’t you know who I am?” only get him a blow on the head.

When the reader first meets Uncle Sam, on the street, in the hospital, he has no idea who he is. All that comes out of his mouth is babble: presidential sound bites, recent political memory vanishing into Uncle Sam’s political unconscious. “People have a right to know whether or not their president’s a crook,” he hears himself saying. “I am not a crook.” “Message: I CARE!” “I don’t care what the facts are!” “I’ve signed legislation that will outlaw Russia forever.” But as the man begins to walk the streets—as his boots are stolen right off his feet, as he sits in an alley eating garbage from a Dumpster—the voices in his head come from every source. The shape the voices take is text-book schizophrenia; somehow, they remain part of the same shared, national language. The voices bring fragments of cultural speech onto a historical stage, where they seize the nation’s political story and tell it as if it were new. “This is not my beautiful house,” Uncle Sam says, quoting Talking Heads’ “Once in a Lifetime,” itself quoting the sermon of an African-American radio preacher. But then in an instant, Uncle Sam is riding in President John F. Kennedy’s motorcade in Dal­las as Jacqueline Kennedy turns her face to his. “This is not my beautiful wife,” Uncle Sam says—and you realize you have gone through the looking-glass of your own house, which is the house Lincoln spoke of in Springfield, Illinois, in 1858: “A house divided against itself.”

The books climax with a clash of the titans, the empowered, official, certified Uncle Sam and the derelict towering over the Capitol, two scary old men throwing punches at each other like two Godzillas, but the most powerful stop on Uncle Sam’s journey comes when he finds himself in a junk store. He picks up a Dancing Sambo doll and winds the key. “Hey there, Mr. Bones!” he says. “What did they always say at the start of those minstrel shows?” “The crimes of the guilty land will never be purged except with blood,” says a black lawn jockey in the corner. “Actually, I think it was ‘Gentlemen, be seated,’ ” Uncle Sam says. ‘Actually,” says the lawn jockey through his huge lips, “John Brown said that. Right before they hanged him.” And then with a turn of the page you are staring into a panel so stark and luridly composed that you can’t immediately see what it is. Uncle Sam and the black jockey are framed by the arms and bloodied face of a black man, hanging upside down. The jockey relates the man’s story: He was a great accordion player. One night at a performance in Louisiana, a white woman passed him a handkerchief so that he might wipe his face. White men ambushed him after the show: “By the time they’d finished with him… he couldn’t remember who he was.”

By the end of Uncle Sam, after all of the old man’s adventures, taking him again and again to the edge of madness, always with a sense of the absurd, of the impossible, the idea of a nation founded on ideals as shining as those of the U.S.A. seems more impossible than anything else. The great battle in the skies of Washington, D.C., is over; the tramp turns up muttering on the street again. A young couple asks if he’s all right. “I’m okay. I’m fine,” he says, looking at the ground. “We put a dollar in your hat,” says the guy. The man is confused again; he wasn’t wearing a hat. Then he sees a star-spangled white topper on the street, pulls out the dollar, puts on the hat. As he moves off, singing “Yankee Doodle,” a new bounce in his step, he passes under a small, swinging sign with a pyramid topped by an eye. “Novus Ordo Seclorum,” it reads: “New Order of the Ages.” You might laugh; if you’re lucky, you run your fingers over those words every day. Those are the words on the dollar bill. I laughed, but I felt privileged and happy, as if I’d just been told a secret. That the true history of the country should be found in a junk store, or that its motto should turn up as a come-on for—what? The sort of occultist shop where you get your fortune told? A welfare office?—seemed like the perfect shaggy dog joke. “Was that the country I heard?” “Naw, it was just a shaggy dog.” 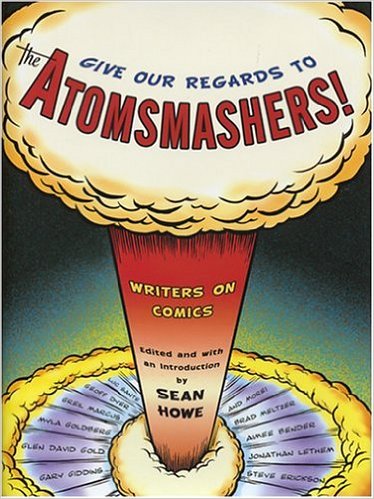 From Give Our Regards to Atomsmashers! Writers on Comics, Pantheon Books, 2004 (Edited by Sean Howe)