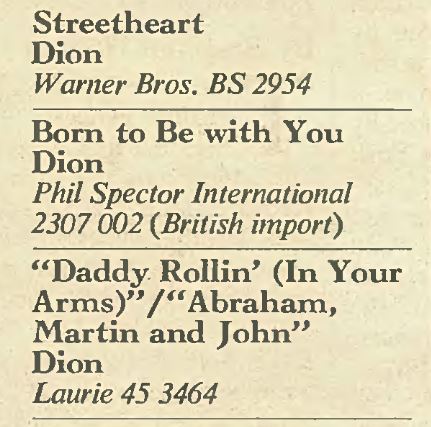 Here’s Dion’s stab at a second comeback. Let’s assume you’ve been looking forward to it. Well, for­get it—the inoffensive banality of the Warners cover art inevitably kills the mood. An off-centered picture, slightly out of focus (it’s hard to tell if this is an accident or an “effect”), lettering that must have taken someone two minutes of work and less thought; an ugly off-blue background.

The Spector sleeve is another story. Norman Seeff’s muted muted-brown good taste is a cliché but not as bad as Warners’ open-jacket-revealing-bare-chest-­with-medallion. Seeff’s picture communicates confidence, as if Dion were quietly daring you not to like his music. On the back, Dion looks older and stronger; he offers an odd half-smile, slightly unnerving, which fits the ghostly dark sky and tiny full moon that hover behind him. Surprises on this album! say these graphics—an impression marred only by Spector’s liner notes. “In closing,” he writes, “I would like to dedicate this album to the late Lenny Bruce—’cause Lenny, we were all Born to Be with You.” Which provides, if nothing else, the most disorienting non sequitur in the history of the record business.

In these cases you can tell a book by its cover. Streetheart suffers from the same lack of focus seen on its jacket. As a singer-songwriter album it falls short of the craftsmanship of Sedaka’s Back and misses the compelling individuality of War­ren Zevon’s recent debut. Everything’s very moderate on Streetheart; the music, vaguely Philly-­soul influenced, might be called the solo-album sound: competence substituted for personality. Dion has written some good songs (“Queen of ’59,” “Streetheart”) but also an utterly conventional help-me-make-it-through-the-night number; he comes up with some fine performances (the Temptations’ “The Way You Do the Things You Do,” and “Lover Boy Su­preme”) but the overall tone is too even, too smooth. There’s just not much here that survives after a dozen playings. Streetheart is attractive, it’s “contemporary,” but it’s dull.

Dion complained in these pages a few issues back that not only were the tempos on Spec­tor’s Born to Be with You “too slow,” the whole project had a lot more to do with “Spector” than with “Dion.” He was right on both counts. The tempos aren’t merely slow, they’re on the verge of expiring, and Dion is clearly a Spector foil. But with the exception of “Good Lovin’ Man,” a hideously conceived and recorded attempt at a raving, bragging tune, the album is a queer sort of milestone—partly in Dion’s career, partly in Spector’s.

It’s very eerie. The record gives you Spector’s old sound, ground to a halt, edged forward piece by piece; his old songwriters (Carole King, Gerry Goffin, Barry Mann and Cynthia Weil); and several of the musicians who played on the Crystals’ and Ronettes’ hits of the early Sixties (Hal Blaine, Barney Kessel, Nino Tempo). Dion seems at home if not at ease here; he sings the words he’s been given, but might just as well be scatting. While the result has a certain beyond-the-grave feeling to it, I found the mood growing on me, until after a week or so the suppressed majesty of the music began to make itself felt. Dion is clearly trying things he’s never attempted before, and so is Spector, and that’s why the record works.Still, there’s no denying that the slowness and the almost total lack of melody can wear a listener down (and it’s in the way the dropped-anchor arrangements flatten out the melodies that Dion, Carole King and Cynthia Weil are truly wasted). What saves the LP from such oppressiveness are two tunes co-written by Dion and not produced by Spector: “Your Own Backyard,” a song released by Dion as a single six years ago, produced by Phil Gernhard, and “New York City Song,” produced by Cash­man and West. These cuts are unquestionably the best here, and also superior to anything on Streetheart. Both emphasize the sharp, bluesy acoustic sound Dion has been working out in clubs over the past decade—the backing is precise and restrained, the emphasis on Dion’s lyrics and his singing. “Your Own Backyard” is a sardonic, bitter account of Dion’s time on heroin that cuts right through Spector’s fog; “New York City Song” (with the wonderful lines, “That’s the year the dream died in New York City/That’s the year I left without a sound”) is an almost perfect example of the Brill Building School at its most acute. Not a word is out of place, but it’s the melody, beautifully handled by Dion, that sticks the track in your heart. The album’s two styles work in counterpoint: Spector provides the weight and the novelty, Dion the relief and the passion. It’s the best work from either man in a long time.“Daddy Rollin'” was cut in 1968 in Miami with a group of local musicians; the resultant tape was then speeded up by Laurie and dropped onto the flip of “Abraham, Martin and John.” This virtually unknown music captures Dion as the wild wailer of “Runaround Sue” and “Lovers Who Wander,” and as a man who, by 1968, on this side at any rate, was sounding equally like a black blues singer intent on final ecstasies and Van Morrison hellbent into the mystic. What “Daddy Rollin'” has, and what Dion’s music of the last two years lacks, is drama: “Gonna skkkkkkip ‘cross the ocean like a stone,” he sings—this is Dion’s “Goin’ Home,” compressed into two and a half minutes with all the increase of intensity implied by the laws of physics. As a record, “Daddy Rollin'” is something that no Dion fan can afford to be without; as feeling, the man himself cannot afford to be without it either.