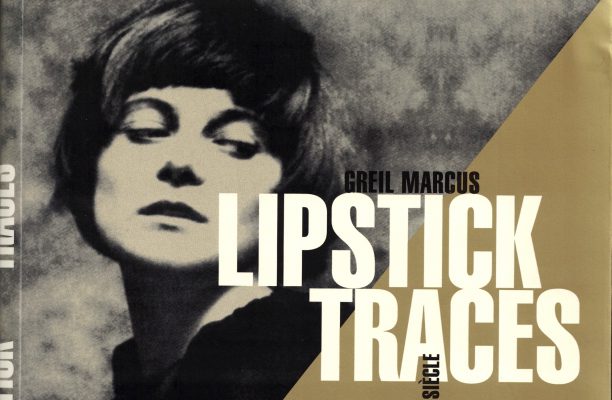 Éditions Allia, Greil Marcus’s French publisher, have just published new editions of Lipstick Traces: A Secret History of the Twentieth Century and Three Songs, Three Singers, Three Nations. Both are available through the Éditions Allia website (see the full listing of G.M. titles at Allia here).
Regarding the new edition of Lipstick Traces, Greil writes:
The Allia Lipstick Traces, which they originally published in 1998, stunned me. I had many conversations with Gérard Berréby, the publisher, and others at the company, about the new edition, but I had no idea of the internal redesign they were planning—putting the main illustrations against a dramatic black background, adding many contextual illustrations in the margins and adding full-page illustrations that had no narrative necessity, just for fun. The primary back section, originally “Works Cited,” a lightly annotated reference log, has been vastly expanded as “Works Cited and Sighted,” to take in publications, movies, records, videos, exhibitions, and termite and world-historical events since 1989, as with the 2009 Harvard edition, but with eight more years to update.

It’s a dream edition, a true work of book-making. But the thrill is the cover. The Allia covers of previous editions were either plain text or illustrations so faint they barely registered. Now there is a powerful design, showing the dadaist Emmy Hennings casting a dubious look on the whole enterprise—the whole enterprise of avant-garde art, of the book, and especially on the figures on the strip around the cover, showing Johnny Rotten, Guy Debord, and Hugo Ball, since the distributor complained no one would recognize the woman on the cover, as if the image weren’t overwhelmingly alluring regardless of whose it might be.

Re: Three Songs, Three Singers, Three Nations:
The new Allia version features both on the cover and as a full page inside a photo, from the collection of the Dallas archivist Lynne Rostochil, that may show the blues singers and guitarists Geeshie Wiley and L. V. Thomas, the subjects of the chapter “Disappearance and Forgetting”—about whom, until the recent research of John Jeremiah Sullivan, absolutely nothing was known beyond the nicknames that appeared on their few 1930-31 Paramount 78s. The picture fits all kinds of contextual facts, but it may never be possible to absolutely authenticate it. But whatever it is, it’s a gorgeous picture of two glamorous, confident women in a unique moment in time.