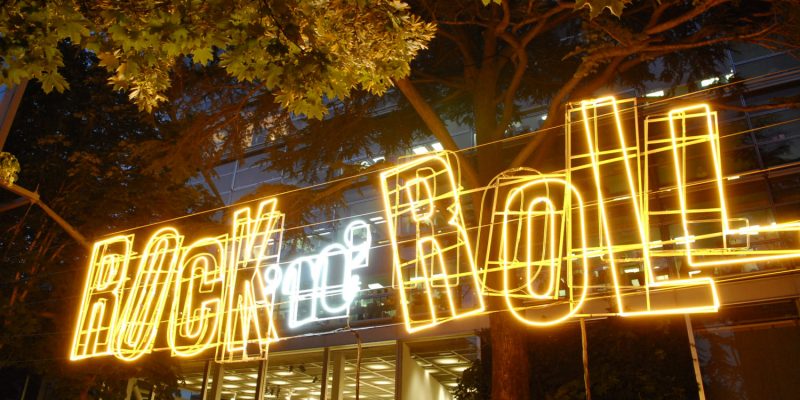 A few feet away, Little Richard was a verse into “Blueberry Hill.”  I turned around, and looked down at our table: Wanda Jackson, Mike Stoller, Jerry Leiber, and Tina Turner all singing their heads off, right through the whole song.

Last night was once-in-a-lifetime. We arrived at the Cartier Foundation—an eight-story modern glass-fronted building, with galleries on the lower two floors—for the opening of “Rock ’n’ Roll 39-59,” curated by Gregg Geller, once of Columbia, a record man I’ve never heard anyone say a bad word about. I had consulted along with others over the previous few years. Very glamorous crowd, a lot of actors we didn’t know, and a tremendous exhibition—from what might as well have been a 100-foot-long gold 1953 El Dorado convertible to a wall of mounted jukeboxes to a gallery of ’50s concert posters—remarkable that almost all of the performers featured are still remembered. That was the street-level floor. Below was the historical part of the show, with continual kinescopes, film excerpts, hot spots where you heard music coming from the ceiling that illustrated what you were looking at—Big Joe Turner doing a bizarrely lackadaisical “Shake Rattle and Roll” with unrecorded lyrics, say, or Bo Diddley on the Ed Sullivan Show in 1955, before Elvis, making “Bo Diddley” sound like the most dangerous voodoo chant imaginable. Kiosks dedicated to major early stars, full of record covers, programs, posters, letters, some familiar, most not (Fats Domino at 9, only picture of him I’ve ever seen where he isn’t smiling, just across from a picture of Emmett Till, which in this context made you think about the records he might have made if he hadn’t been lynched in 1955). You could spend hours in a relatively small space.

After an hour or so we went into the garden for a dinner, to be followed by a performance by Little Richard.  Jenny and I were at the center table, with, as it turned out, the best seats in the house—the two front seats, closest to the stage. I was amazed as I looked at the place cards on our table.

The dinner was a joke—fois gras with Coca-Cola sauce (ok), salmon with ketchup (horrible), pigeon burger (awful)—a French rock & roll menu. But it was irrelevant.

Tina Turner looked like a real person—that huge smile erased the celebrity displacement you get when you are near an overly mechanically-represented person. Wanda Jackson, the “Queen of Rockabillly,” who toured with Elvis in 1955, is a figure out of a wax museum—very short, even compared to Tina Turner. Mike Stoller is 100%, full of fun and quickness and old-school New York street talk. Jerry Leiber, about the same age, seemed very enfeebled, slow, blank, as if he didn’t know where he was—so he seemed, but he was anything but (the next day, for interviews, he appeared in black leather jacket and shades and was on top of everything, vehement, cutting). There was Alfred Wertheimer, the photographer who was with Elvis in New York and Memphis in 1956, who told great stories about exactly how and why he took certain photos—down to theory of exposures, lighting, positioning, all of it fascinating. I didn’t hear a pretentious or self-important word from anyone all night.

Little Richard appeared with his big band—two guitarists, bassist, cornet player, two saxophonists, electric keyboard player, two drummers. Explaining that he hadn’t walked in eight months because of sciatica, he sat at the piano and the brightest notes came out, like the rhinestones all over his suit. “The energy! The energy!” Mike Stoller kept saying. It was a whirlwind, with so many songs by other people—“I Saw the Light,” “I Got a Woman,” “Bony Maronie”—that his own hits became events. He said he came out of the blues—and did “Can’t Believe You Wanna Leave,” which Nick Tosches once called “one of the five coolest blues songs of all time,” which has always struck me as at least one of the five coolest lines about music of all time.

Little Richard knew how to get the most out of what he had. For “Tutti Frutti” he called people onstage to dance. At first two or three women from the Foundation came up and danced with each other. Then two beautiful people in their thirties (or maybe older) leapt up and proceeded to spin their way through the most thrilling performance of ’50s bop I’ve ever seen. They did everything, with attitude you could have bottled and sold.  Every move they made was infectious. Little Richard kept the song going six, eight minutes to make room for them. I turned and there was Jerry Leiber doing hand jive with Wanda Jackson, then the two of them dancing at the table. At first the couple on stage seemed merely terrific, then too good not to be pros, part of the show.  Jenny asked, they said “no, just movie stars”: Jean Dujardin and Alexandra Lamy (in a few years world-famous for The Actor).

A few songs later Richard demanded fealty—that is, everyone he wanted from the audience up there with him.  Eddie Mitchell, a French ’50s rock ’n’ roll singer and ever after character actor—you’ve seen him in a hundred movies—was called out as an old friend. “I once knew a black Wanda Jackson,” Richard said, as Wanda, who walks very carefully (and is still touring), all but bounded up so, it seemed, everyone could see she was white. Tina Turner came up last, but seemed more fully there, finally, than anyone else. I can’t even remember which song it was—“Long Tall Sally”? “Keep a-Knockin’”?—but it was like a testament.

Jenny was convinced Little Richard didn’t know where he was—there wasn’t a word about Paris, France, Cartier, just him saying they had to be in Tennessee the next night, then saying they’d be in Atlanta. The curtains closed just as he began his last song—“Jenny Jenny.” Jenny stepped up to the stage and parted the curtains to look in—Richard was handed his glasses, and helped onto crutches. In terms of duration and intensity he had put on at least twice the show anyone could have expected from him.

I hope this gives you at least a hint of what a night it was.