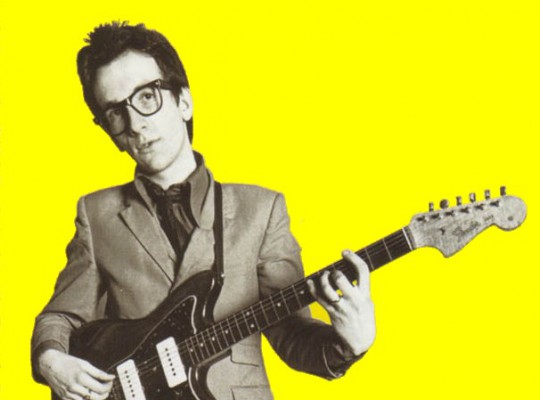 Could it be true?

Once the Sex Pistols’s “Anarchy In The UK” arrived as a $10 import in early 1977, (I’d) Rather (Be) Ripped Records in Berkeley went punk overnight. As someone wrote at the time, it became one of those places you were afraid to walk into—because of how much it would cost you to get out. I was an instant sucker for anything approximating whatever it was that was happening in London, Manchester and Liverpool, but in 1977 even I could tell that Elvis Costello’s My Aim Is True, released in the UK on the Stiff label, was a hoax cooked up by jack of all pop trades Nick Lowe and singer Graham Parker.

It wasn’t just the pseudonym, as obvious as it was ridiculous. It wasn’t simply the fact that Lowe, Parker’s producer—a prankster who had recorded at least two songs about the joys of Bay City Roller fandom—was also credited with producing “Elvis Costello,” or that the singer sounded something like Parker, whose 1976 albums Howlin’ Wind and Heat Treatment were the most nervous pop music the UK had turned up in years. It was that I didn’t believe anyone as geeky as the character on the jacket, who looked as if he were about to trip over his own feet, would have the nerve to appear in public under his own name.

The real story was, if anything, harder to believe—that the record was the work of one Declan McManus, a moonlighting 22-year-old married computer operator who grew up in Liverpool and who now, in London, had already declared that all of his songs were motivated solely by “revenge and guilt”. But as the songs took over—as you caught the strange, utterly assured merging of rock ‘n’ roll classicism and punk perversity, heard both the thug hiding in the singer’s throat (go ahead, believe him when he says “I’m not angry”, it’s your funeral) and the cultivated, literary person writing his songs—the story behind the songs ceased to matter. No biography, real or imaginary, was going to explain anything this good, this different, this odd.

Accompanied on My Aim Is True by Clover, a northern California band trying its luck on the London pub-rock scene, Costello covered so much ground so fast he seemed to burn it up (he wouldn’t round up the three-piece Attractions, his long-time backing band, until “Watching The Detectives,” a single recorded after the UK release of My Aim Is True, but included on the later US version on Columbia). The songs cut so deeply that what first stuck in your memory might have told you something about who you were. Which meant more, the ominous rockabilly rumble under the choruses of “Mystery Dance,” or the dreadful, hilarious dump job in “(The Angels Wanna Wear My) Red Shoes” (the song, like Rather Ripped, in the grand tradition of parenthetical rock ‘n’ roll titling)? The lovely, necrophiliac image of “fingers lying in the wedding cake” in “Alison” or the seemingly endless layers of past and future, contempt and self-hatred, in “Less Than Zero”? That’s the great thing about an album as good as this one; you keep playing it, you don’t have to decide. You let the music change your mind.

All across My Aim Is True, you could imagine you were listening to Buddy Holly after shock treatment, or an impostor. (Of whom? Costello? Any remotely credible pop star?) Never mind how he looked: Costello sang as if he had a gun at his back, and with “Less Than Zero,” he did—most of the 20th century. Costello wrote the song, his first single, after watching a BBC talk show featuring Oswald Mosley, in the ’30s the leader of the pro-Nazi British Union of Fascists, in 1977 a hero to the racist, neo-fascist National Front, which at the time was savaging Pakistani and Indian Britons in the streets and pushing the UK’s Tory party to the right in the rooms where policy was made. “There he was on TV,” Costello said five years later, “saying, ‘No, I’m not anti-semitic, of course I’m not—doesn’t matter even if I was!’ His attitude was that time could make it all right! It was a very English way of accepting things that used to really irritate me, really annoy me. The complacency, the moral complacency there—that they would just accept this vicious old man: not string him up on the spot!”

“Dressing up in pervy Hitler Youth uniforms,” he went on, speaking of the National Front leaders. “They’re really sick people. If there wasn’t a danger that some people of limited intelligence would take them seriously, they’d be sad and you’d feel sorry for them. But you can’t. There are people gullible enough and there are enough problems… [They] can point fingers and say, ‘These are the people who are the source of all your problems: it’s the black people.’ It’s the same as saying, ‘It’s the Jews.’ I’m English, but my ancestry is Irish, and they used to say the same about the Irish as well. My wife’s Irish. Sooner or later, we’ll probably have to leave England—because I’m sure the people of England will try and send the Irish back.”

All that packed into a single song—to find it and make it stick demanded every instinct for concealment Costello possessed, for tying words to melodies, vocal inflections to a fuzztone, so that nothing would be quite as it seemed. So you hear sarcasm, then you hear it turning into hate. For whom? Did he just say there was a body on the floor? What’s this about Mosley and his sister and their home movies—of the two of them with Hitler, or the two of them with each other? The young man watching the TV changes into a little boy hiding under the sheets, because he doesn’t want his parents to see what he’s doing, because he doesn’t want to have to listen to what they’re doing. But he can’t help himself: the rhythm of the song is like the careful, silent steps a child takes when he or she is walking up a staircase in the middle of the night. “Even your mother won’t suspect it so your father won’t know”—there’s the sense here that the singer will never be able to tell his parents what he’s seen on the television tonight, won’t be able to tell his parents how he suddenly couldn’t tell them and the old fascists apart. The only way he’ll be able to tell his parents what he saw is if he tells the whole world. So he does. He puts out a single.

It’s the key to the new language spoken all through My Aim Is True. You can hear the rage, the suspicion, the mistrust, and the black humour of displacement that is “Less Than Zero”—the sense not that one is in the wrong place at the wrong time, but the conviction that for the person who is speaking there will never be a right place or a right time—in all of the strongest songs here, the ones that sound as clean, fresh, and, most of all, unsolved as they did nearly a quarter-century ago. You might hear it most vividly in “Radio Sweetheart,” the B-side of “Less Than Zero,” perhaps because for most people it isn’t lodged in memory, doesn’t carry the baggage of personal association that “Alison,” “Red Shoes,” “Watching The Detectives,” “Mystery Dance” carry, the songs that for years the radio would not give up.

“Radio Sweetheart” kicks off lightly, with strummed acoustic guitar, a sly slap on the snare, a few thick, isolated bass notes, the trill of steel guitar, a delicious rhythm. But why does everything feel like a threat? What’s this about “goose-step dancing”? Don’t worry, the song immediately says: it’s just a love song, and hey, it’s the weekend. The steel guitar sweeps up the tune, and the singer is pleading “Hide your love” as if it means “Kiss me quick”. You can’t translate the song, not all at once, so you don’t try. You remember it, if you do, as a harmless ditty, because everything after the fast start erases what that fast start is saying: look out. You feel safe, but you know you’re not. You can’t fool me.

That, really, might be what this whole first, complex shout of Costello’s long career is about: not that he’s a pop artist smart enough to seduce you, though he is, but that he’s smart enough to know that it’s really the audience who seduces the artist, seduces the artist into believing the artist is safer than he or she will ever be, or has any right to be. So along with a love for songwriting, for small, perfectly crafted tunes, for melodies that fly through rhythms like birds, is Costello’s first manifesto: a promise that he will be around, his own bad conscience and yours.