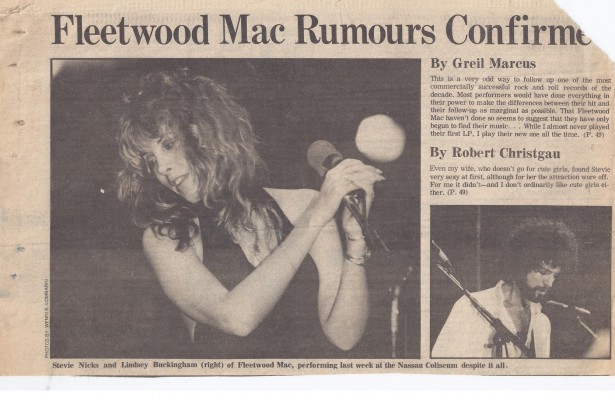 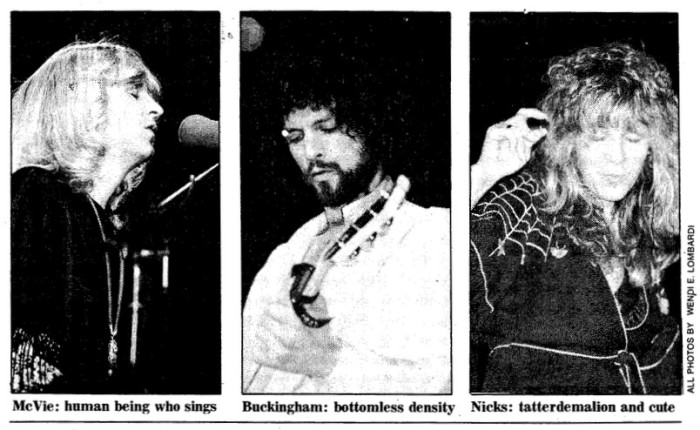 I’ve gained a lot of respect for Lindsey Buckingham, guitarist and singer for Fleetwood Mac, since the time when, reviewing Fleetwood Mac, the band’s last album—by now the best-selling LP Warner Bros. has ever had—I stupidly dismissed him and his partner Stevie Nicks, then new additions to an old British group I’d long considered merely a vehicle for singer Christine McVie, as “uninteresting” (“uninteresting Americans,” at that). Along with most of rock and roll America I have been listening almost constantly to the Buckingham-Nicks-McVie version of Fleetwood Mac since the fall of 1975, when that last album first began to break on top 40; exposure proved how good the new Fleetwood Mac music was, but exposure never wore it down. Like McVie’s “Over My Head” and “Say You Love Me,” Nicks’s “Rhiannon” stood up to saturation airplay. Everyone gets sick of hits he or she initially loves; I never got tired of these, and, while the melodies and arrangements of backing vocals had a good deal to do with that, the main reason, I think, was Buckingham. On each of these tunes (and on “World Turning” and the knockout “Blue Letter,” which I still can’t believe Linda Ronstadt didn’t cover the week it came out) Buckingham overdubbed track after track of guitar, creating a sound of bottomless density, yet never sacrificing the slightest bit of feeling to the formal or technological accomplishments of his technique. Nor did he ever sound like any kind of guitar whiz—he simply sounded like a great band. (The rhythm section of Mick Fleetwood, drums, and John McVie, bass, didn’t hurt.) Again and again Buckingham came up with the perfect framing notes to call attention to the subtlest nuances of McVie’s or Nicks’s singing (never overshadowing them), and then found the licks to set off his notes, and then doubled the process, tripled it. The songs rang. For the last year and a half, the textures of Buckingham’s sound have been as rich as anything on the radio, AM or FM.

The absence of that richness, that density, is the first thing one hears on Fleetwood Mac’s new album, Rumours; it’s that absence that nearly led me to dismiss Rumours, just as I’d once dismissed Buckingham and Nicks. Except on the single, Buckingham’s “Go Your Own Way,” the arrangements are spare, the songs are not all that impressive on the radio, and the album, in pieces, seems slight. In fact, there may well be four or five numbers on Fleetwood Mac better than any single performance on Rumours. None of McVie’s four new tunes rank with her best work, nor has Nicks written anything as unusual as “Rhiannon” or as emotionally precise as “Landslide.” Yet while I almost never played the last LP, being perfectly content to let the radio supply me with Fleetwood Mac, I play the new record all the time. Fleetwood Mac never quite held together; made up of weaker individual cuts, Rumours is a stronger album.

As everyone who cares must know by now, the two couples in the band, Buckingham-Nicks and McVie-­McVie, broke up over the last year, and the songs on Rumours reflect that. Buckingham opens the album by calling himself second-hand news, and Nicks ends it by telling him, and presumably herself, to pick up the pieces and go home. Right in the middle of the set, in a song credited to all five members of the band, are these bitter lines: “I can still hear you saying/You would never break the chain.” So the tunes reinforce each other, and the dominant mood of the record—depressed, angry, resentful, foreboding—reaches a listener with the sort of impact a single track on the radio simply could not have. The lack of the many-layered textures Buckingham built for the earlier LP makes the new songs seem less sturdy, less immediately appealing, less pop; full of single guitar lines and stark, chorded modal figures, the songs sound brittle. Because, in contrast to Buckingham and Nicks, McVie here has written only about finding love, at her best, as on the slow, underplayed “Oh Daddy,” she has the effect of defining what the other two singers incessantly damn each other, and themselves, for losing.

Except for “Go Your Own Way,” which seems to grow in power every time I hear it—Buckingham’s guitar solo, roaring out of several other guitar parts, is straight off The Who Sing My Generation—nothing on this album comes on, nothing cries out for attention. The music seems to say that it will make its point, or it won’t; that it will bind up wounds, or it won’t; that you say your piece, hoping it will come across, and if it doesn’t, it doesn’t. This is a very odd way to follow up one of the most commercially successful rock and roll records of the decade. Most performers would have done everything in their power, busted love affairs or not, to make the differences between their hit and their follow-up as marginal, if not as inaudible, as possible. That Fleetwood Mac haven’t done so, haven’t even come close to doing so, seems to suggest that they have only begun to find their music, and that selling, say, a mere million copies of Rumours will no more get in the way of their finding it than did selling four million copies of Fleetwood Mac. As 1977 moves on, I doubt if anyone will be able to say the same of Peter Frampton, Steve Miller, or Boz Scaggs.