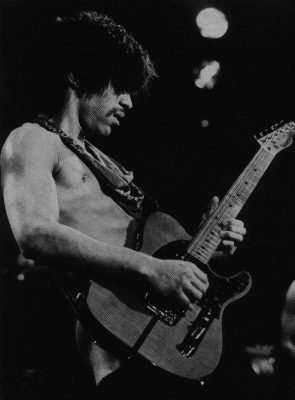 Anarchy is where you find it: “Welcome to Der Wiener-schnitzel,” says a polite little counterman. “May I take your order, please?” “Yeah,” answers the customer, “I want—” and suddenly a torrent of desire mixed with hysteria rises from his throat, gets caught somewhere in the esophagus, and then bursts free as unfettered Southern California hardcore: “TWO LARGE COKES! TWO LARGE FRIES! CHILE CHEESE DOG! LARGE DR PEPPER! SUPER DELUXE WITH CHEESE AND TOMATO!” The counterman ought to be hiding behind the soft-drink dispenser after this; he hasn’t even blinked. “Would you like incomprehensible on that?” he asks (some people hear “bull sperm”). The customer doesn’t blink either. He expected this. He’s been to Der Wienerschnitzel before. “NO!”

The customer—the singer—is one Milo, described in a press release as “skinny… with tense face and one hand gripping his pants leg.” The band is the Descendents—since Milo sounds like a drill sergeant, ancestors include not only Little Richard but, presumably, Sgt. Barry Sadler—a four-man combo from the Redondo/Manhattan Beach area. “Weinerschnitzel” (the spelling varies on the disc) lasts fully eleven seconds, as does “I Like Food,” another tune from the Descendents’ “Fat” EP, and if a more perfect disc has appeared this year, I haven’t heard it.

Which brings up the Real Life Rock Top Ten for 1981. I regret to announce the final appearance of the Journey Award for the worst album by a California band. Having released two LPs in 1981—Captured and Escape—Journey accomplished the astonishing feat of tying itself for the prize, which has therefore been retired for reasons of gross redundancy.

1. “Jessie’s Girl,” Rick Springfield
The moment I first heard Kim Carnes’s “Bette Davis Eyes” remains the high point of the year for me, but endless airplay brought the calculation of that great single to the surface, and buried its mystery too far beneath it. “Jessie’s Girl” is all surfaces—classic teenage music from a thirty-two-year-old Australian-born Angeleno who makes his rent playing Dr. Drake on General Hospital—and after well over six months on the radio the disc comes across with more punch than ever: fast, funny, anguished, sexy—and that drum sound! and that guitar solo! Still, it may live in history more for these lines, as naturalistically odd as anything by Chuck Berry: “And I’m looking in the mirror all the time/Won­dering what she don’t see in me.” A hit that should have been a smash was Rosanne Cash’s painful, fated “Seven Year Ache”; a smash that should have been a hit at one of the year’s many devil’s music bonfires was Starsounds’ “Stars on 45,” a disco medley of Beatle tunes that stands as the most commercially effective exploitation of John Lennon’s death—so far.

2. Prince at the Stone, San Francisco, March 29
Fronting a band of three blacks and two Jews from Minneapolis, Prince stormed into town on the heels of last year’s breakthrough Dirty Mind, was greeted by the most excited and diverse crowd (black and white, punk and funk, straight and gay, young and old, rich and poor) I’ve been part of in a long time, and sent everyone home awestruck and drained: “That was the history of rock ‘n’ roll in one song!” a friend shouted before the last notes of “When You Were Mine” were out of the air. All barriers of music, sex, and race were seemingly trashed by Prince’s performance, and leering organist Lisa Coleman walked off with the 1981 Most Valuable Player award—edging out Junior Walker, whose sax work on Foreigner’s “Urgent” is the closest he’s come to hoodoo in a twenty-year career.

All barriers were in place when Prince opened for the Rolling Stones at the Los Angeles Coliseum in October. He was roundly jeered and taunted with racist catcalls, and after inaccurate reports appeared in the news that he had been “booed off the stage” (Prince left after twenty minutes, all his contract allowed), he and his band were pelted with garbage at a second Stones show two days later. A correct account of the situation given by Ken Tucker in the Los Angeles Herald-Examiner brought this anonymous response in the mail: “You obviously are a fan of that faggot nigger group or you wouldn’t of lied about it. I just wanted you to know that us W.A.S.P. rock n rollers pay to see white performers and not niggers, faggots or tawdry critics like yourself President Reagan has proven once and for all that liberals, niggers, fags and minorities are out. Thank god for that. I can sure bet your ass on one thing, prince wont open up for the stones next time around.”

3. Beauty and the BeatGo-Go’s
Reet petite.

4. “Eisiger Wind,” Liliput
Three Zurich women leave off rioting in the streets for a day, change their clothes, and flaunt their hometown roots in the Cabaret Voltaire. A furious manifesto, thrilling, alarming, probably the most radical sound of the year, in English, and I still wish I could understand more than four of the words.

5.El Rayo-X, David Lindley
Los Angeles rock announced itself in the early fifties as novelty R&B, narratives about trouble with the white power structure that could be made public only as jokes. Whether Lindley—longtime Jackson Browne guitarist and in the sixties a member of the definitively eclectic L.A. band, Kaleidoscope—learned the music from the Robins (later the Coasters) or Jan and Dean, he caught its spirit on this debut solo LP: a goof with a sting in it. In other words, this breezy romp through personal renewals of old faves (the Temptations’ “Don’t Look Back,” K.C. Douglas’s “Mercury Blues,” Huey “Piano” Smith’s “Tu-ber-cu-lucas and the Sinus Blues”) and addled street-life originals (such as “Pay the Man,” in which a hooker throws her baby in the river—“Now Sally is a happy girl,” Lindley explains earnestly) may in truth be a concept album about pain, poverty, and the absurd. The music is surefooted white rhythm and blues cut with zoot suit reggae—an eighties version of what used to be called folk rock—and Lindley’s playing, so offhand, can take your breath away.

6. “Start Me Up,” Rolling Stones
There really isn’t much happening on Tattoo You, which will likely top most polls for album of the year—and on LP this crude and rangy piece of rhythm was soon disarmed. It found its place only in the Top 40 mix, where its roughness disarmed everything around it—and forced DJs to rush back to the mike to drown out the last line, the one that followed the final chorus of “You make a grown man cry”: “You make a dead man come.”

7. Bruce Springsteen at the Sports Arena, Los Angeles, Au­gust 27
I was there because I wanted to hear him sing one line: “Take a knife and cut this pain from my heart.” He didn’t just sing it, he did it.

8. “I Feel Like Going Home,” Charlie Rich
In 1973, after more than sixteen years as a little-known country soul singer, would-be bluesman, hopeful rocker, and secret jazz pianist, Rich was on the verge of the success that has since made his fortune. Thus he sat at the piano and, rolling his fingers over the keys until he found the deepest, plainest gospel chords, recorded a song he had just written about failure. It remains the strongest moment of Rich’s career—a match for Ray Charles’s “Georgia on My Mind” or Otis Redding’s “Try a Little Tenderness,” and somehow more indomitable than either—and it went unheard until this fall, when Epic stuck it on at the end of an undistinguished various-artists anthology called Rockabilly Stars, Vol. 1.

9. Re•ac•tor, Neil Young & Crazy Horse
Leave it to the hermit of La Honda to put out an album drenched in no-nukes iconography (as with the LP title, all song titles are broken down into syllables, a typographic conceit apparently symbolizing the splitting of the atom) that nevertheless reaches its high point with a gloriously mindless epic called “Sur•fer Joe and Moe the Sleaze.” Yes, it’s the same Surfer Joe you knew and loved when the Surfaris sang his praises up and down the coast in 1963, now grown up and wondering what to do with himself—a dilemma made irrelevant by “Shots,” Re•ac•tor‘s last cut. This is the most powerful evocation of all-out war since the Sex Pistols’ “Holidays in the Sun,” and every bit as horrifying, and exciting: for six minutes, phrase after phrase, Young’s guitar drives smack into a volley of machine-gun fire. If this sounds like a cheap sound effect, it isn’t—the machine gun is used as an instrument, and before long it has as great an aesthetic charge, is as listenable, as any other here. Twelve years after they first broke loose with “Cowgirl in the Sand,” Neil Young and Crazy Horse have produced what their music has always implied: a nightmare so intense only the fact that it ends seems false.

10. “That’s the Joint,” Funky 4+1, and “The Adventures of Grandmaster Flash on the Wheels of Steel,” Grandmaster Flash & the Furious Five
The conservatism of mainstream radio doubled back on itself in 1981, and the proof was that rap—aural graffiti, or South Bronx dada—was heard principally in the form of soft-drink commercials. That is, Madison Avenue admen knew they could catch the ear of the public with this stuff, but program directors didn’t believe it. The results fit no demographic printouts. Opening for the Clash in Manhattan, Grandmaster Flash was chased from the stage with a barrage of paper cups—perhaps less because Flash is black (though, given the white crowd, that surely helped) than because his sound cutups on twin turntables (“the wheels of steel”) produced the response that has obtained throughout the twentieth century when the avant-garde has met an audience that doesn’t know much about art but knows what it likes. At the same time, the Clash was heard throughout black New York as “The Mag­nificent Dance,” their own rap twelve-inch, blasted from giant radios. And the Funky 4+1 played the Kitchen, the SoHo per­formance artists’ space, to wild applause. Stay tuned, if you can find the station.