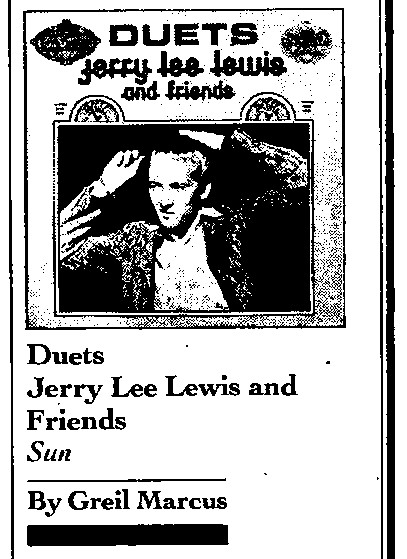 The following memo was recently passed to these offices by an unnamed source in the Consumer Complaint Department of an unnamed state. We reprint it in the public interest:

After the appearance in Billboard of an item implying that the 45-rpm release of “Save the Last Dance for Me,” credited to a Mr. J. L. Lewis, was, in fact, a duet (circa 1961) between Lewis and Elvis Presley (lately deceased), weekly sales of over 100,000 copies were claimed by the Sun label (currently a property of Mr. Shelby Singleton of Nashville, Tennessee, who bought it from its founder, Mr. “Sam” Phillips of Memphis, in 1969). Almost immediately, this office was deluged with calls from irate consumers, most of whom insisted that the “second voice” alternating with that of Lewis “sounded no more like Elvis than my Uncle John” or, in some cases, “than my Aunt Martha.” Though, according to the aforementioned Billboard, one recognized expert, a Mr. “Doc” Pomus, “says he is sure it is Elvis,” Pomus’ testimony can perhaps be discounted, since he is the coauthor of the composition in question and presumably stands to profit from any notoriety it might reach.

The release of a “follow-up” long-playing record, however (Duets, credited to Lewis “and Friends”), obviates all doubts, and gives grounds for action under Title IX. We have made these determinations:

1. Neither Presley nor, to squelch a particularly bizarre story, his twin brother Jesse Garon (officially stillborn but long rumored to have been kept alive since 1935 in preparation for an “Elvis Resurrection”) appears on Duets in any manner. The “Elvis” voice is likely that of a Mr. “Jimmy” Ellis, who in 1972 recorded an imitation of Presley’s “Blue Mom of Kentucky” (also released under the auspices of Mr. Singleton, and also with the implication that the recording was in fact by Presley). This performance, according to an authority on the Sun label, “fooled ‘Sam’ Phillips,” but we have ascertained that Phillips heard the recording only once, and then over the telephone, at four in the morning, during an especially heavy hailstorm.

2. The selection, “Am I to Be the One,” previously issued on the Lewis long-player, A Taste of Country, is an authentic duet between Lewis and a Mr. “Charlie” Rich, and is not “country” but “rock & roll.”

3. A number of the selections (notably “C.C. Rider” and “Cold Cold Heart”) seem not to have been made by either Lewis or Presley, a circumstance which, if provable, mandates action under Titles XXI, CLX and MXXII.

4. Mr. Lewis himself has not been of assistance in this matter. When asked who might have played on the recordings he made during his tenure at the Sun label, he replied only (as he has apparently done in the past): “I played on ’em! What else do you need to know?”

Therefore, we recommend action as indicated above. Furthermore, given rumors of a planned Mystery Beatles Reunion Album, an Elvis Meets Kate Smith Album, and a supposed Jam Session featuring “Buddy” Holly, “Richie” Valens, and “The Big Bopper,” we recommend that this office place an established “rock critic” on permanent retainer. Respectfully submitted…*

* Our lawyers have advised us we must admit that this review did not in fact emanate from any government agency of any state. It is a joke. J-O-K-E.