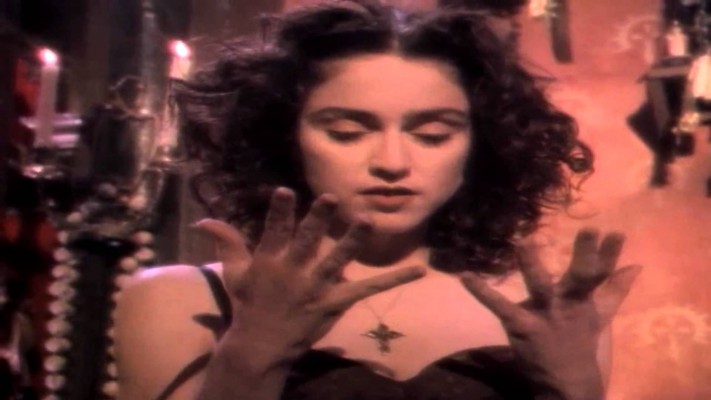 1. Chet Baker, Chet Baker sings and plays from the film “Let’s Get Lost” (RCA)
For a listener who knows nothing about jazz, Baker’s art was in his face: the way the golden boy pan of the ’50s already implied the lizard grimace of the ’70s and ’80s, the way the junkie ruin still contained what was destroyed. That double reflection is one of the stories told in Baker’s singing on these nine end-of-the-road tracks: a caress, beautiful and revolting, a spider kiss. The only tune that doesn’t hurt is Elvis Costello’s “Almost Blue”; it’s as if Baker had to live with a song for an age before he could bring it to life.

2. Madonna, “Like a Prayer” video (MTV)
Her defenders ought to stop pretending this isn’t blasphemous; of course it is, at least according to the strictures of any above-ground Christian sect. What’s “like” a prayer here is like the sensuality of pissing drunk as caught in Henry Bean’s novel False Match (“the closest I ever came to prayer,” says the narrator): it’s sex, specifically Madonna’s fantasy of resurrecting Jesus by taking him into her mouth. Probably Salman Rushdie would understand; I imagine him somewhere in England, bent over his desk, an I AM MADONNA button pinned to his lapel.

3. Pauline Kael, Hooked (Dutton, $14.95)
On Something Wild: “The movie gives you the feeling you sometimes get when you’re driving across the country listening to a terrific new tape, and out of nowhere you pull into a truck stop and the jukebox is playing the same song.” 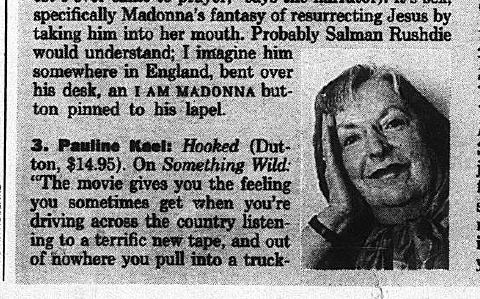 4. Mark Ribowsky, He’s a Rebel: The Truth About Phil Spector—Rock and Roll’s Legendary Madman (Dutton, $18.95)
Nothing like the whole truth, but some strong lines, the worst high school reunion story you’ve ever heard, and good depth perception, as in Teddy Bear Marshall Lieb’s analysis of the Wall of Sound: “It was more air than sound.”

5. Stan Ridgway, “Goin’ Southbound,” on Mosquitos (Geffen)
Ridgway has a way of twisting his voice around a lyric as if the effort is the only way to dull a toothache; this cut lets you hear more twist than effort, which is to say, mannerism.

7. Jon Wozencroft, The Graphic Language of Neville Brody(Rizzoli, $45)
This premature enshrining of the 31-year-old UK designer, celebrated for his album jackets and alphabets, catches Brody’s perspicacity, from his words on Andy Warhol (“his art was subversive for about fifteen minutes”) to handwritten restaurant menus (“Distant utopias. It’s also a class distance, it’s offering the promise that for a short period of time you can be ‘one of us'”). Most striking is the way his record work signifies a transfer of unfettered, world-historical design (the sense that the future is riding on the success or failure of a design) from books to records. In the ’20s and ’30s, John Heartfield, Vavara Stepanova (see Alexander Lavrentiev, Vavara Stepanova, MIT), and other Europeans made books explode out of their coven, turning them into objects that almost talked like people, or nations, or events, or history as such. Brody doesn’t do that, but sometimes he seems to be trying.

8. Marc Eliot, Rockonomics—The Money Behind the Music (Franklin Watts, $19.95)
“Nowhere,” Eliot writes in this shocking expose, which comes in a first printing of 50,000 copies, most of which will soon be selling for $4.95, “was there any obvious R&B influence or direction in Elvis’s career. Whenever he was asked about how he developed his singing style, he was always careful to avoid any mention of black music.”

9. Ex, Aural Guerrilla (Homestead)
One of the atrocity posters included with this Test Department-does-it-better noise ‘n’ politics LP matches photos of people being marched off under guard: “GERMANY—44” paired with “ISRAEL—88.” That the first shot (which looks more like ’39 than ’44, but the two sets of double digits make the point more neatly, so what the hell) is of Jews being marched to extermination and the second is of Palestinians being marched to detention or brutalization is the kind of political distinction the Ex’s noise so blithely transcends.

10. Moonglows, “Come Back Baby” (presumed title)
Heard this on NPR: sounds like a house party. Can’t find it. Reward.