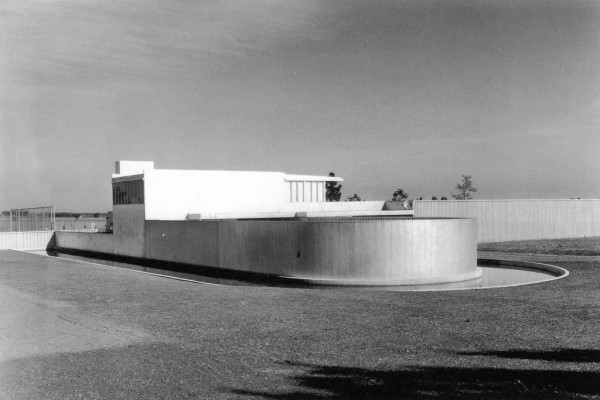 Of all the architects who have made a mark on California, it was Richard Neutra, born in Vienna in 1892 and based in Los Angeles from the mid-twenties on, who actually shaped our sense of the state—and who shaped our sense of the culture, the way of life, that could and should accompany the state’s natural contours. His weird and somehow obvious (at times weirdly obvious) houses, clean, white, and glassed, emphasizing antinatural right angles to the point that his use of a curve could seem like the intima­tion of another world (as in his extraordinary 1935 Northridge house for Josef von Sternberg) [pictured above], suggested that California was a place to be invented, and brazenly. The spirit of that invention was to be found not in competition with nature but in the creation of an aesthetics, a way of recognizing and being in the world, in which a tension between mind and nature worked as the dialectical principle of human existence. To put it another way, a Neutra house could suggest that men and women were in the world but not completely of it, and lead them to rejoice in that fact.

Neutra, who died in 1970, emigrated from Europe in 1923 in order to attach himself to the modernism of Louis Sullivan (of the Chicago school, and the first American exponent of the international style) and Frank Lloyd Wright. But unlike Wright’s buildings, which often meant to seem as though they were naturally implied by their settings (his Marin County Civic Center, adding hills to hills, is perhaps the most formal, if ludicrous, example), or the houses of Berkeley’s Bernard Maybeck, which seem to submit so perfectly and humbly to their settings, Neutra’s most remarkable constructions seem to complete their environments: the still not altogether believable Lovell House, Los Angeles, 1927-29, or his own VDL Research House, Los Angeles, 1932. Nature, Neutra’s buildings can make you think, needed him.

Neutra’s work had all of the European qualities so scourged by Tom Wolfe in his recent barefoot manifesto From Bauhaus to Our House—imperiousness, utopianism, megalomania, hubris, metaphor. In a word, it was art, not folklore; immortality, not ordinary life. Or rather Neutra’s work affirmed ordinary life within a context of immortality, affirmed a heightened sense of ordinary life. In decline, he was no less capable than Walter Gropius of realizing the totalitarian impulses inherent in the international style—the gruesome, lifeless weight of Neutra’s Los Angeles County Hall of Records, 1962, is proof of that. As a young visionary, he was no less capable than Le Corbusier of nihilistic city plan­ning—the drawings for “Rush City Re­formed,” his late-twenties dream town, are the basic modernist nightmare. Unlike Wright or Maybeck, he had no discernible sense of humor. But because in contrast to the other European giants of modern architecture Neutra was primarily a designer of houses, places in which distinct individuals were to live, and because he erected not a few choice masterpieces but house after house, north and south, Neutra’s buildings inevitably and visibly came to terms with the ordinary, the quotidian, and worked to transform it. The photos of interiors (beams, rooms, mirrors, fixtures, bookshelves, built-in beds, doors, stairs) in Hines’s book illustrate the sense of choice always at work in a Neutra house: the idea that every detail of one’s life, like every detail of the constructed environment in which one lives, can be a matter of decision, possibility, consciousness. Nothing need be taken for granted.

All well and good on the level of theory—and a house built and in place but as yet uninhabited can be a pure expression of theory—but what about practice? Hines, professor of urban history at UCLA, has provided a first-rate survey, including all the details one might want on the specifics of construction, planning, siting, and so on; his book is superbly illustrated both in terms of his choice of photos and the quality of their reproduction. But while the story of the building of the Lovell House is complete regarding personal motives and architectural minutiae, the reader learns nothing about what it was like to live in the place, nor about what it was like to live in any of Neutra’s other houses, nor why so many of those houses seem not to have been kept by their original owners. Did Neutra’s houses impose a burden on those who lived in them—the burden of consciousness?

I said earlier that Neutra’s work was art, not folklore, but this is not entirely true. If his work came as art, it persists as folklore: as the informing style packaged and sold in every issue of Sunset magazine, as the informing promise of every Eichler development, as the structure that would house the shared, unexamined fantasy of a good life without risk or drama. It is a style that in its insistence on clean lines, flat roofs, right angles, and openness—an insistence that in hands other than Neutra’s has been quantified and replicated countless times without a single individual touch, without choice, without consciousness—now speaks of a society of banal nice weather and banal leisure, a society in which work exists only as hobby and from which tragedy has not only been banished but is wholly unimag­inable. It is not hard to see how the ambiguous metaphors of the Lovell House could be reduced to so empty and narrow a metaphor—in many ways, all that openness and all those right angles are the antithesis of the metaphors of struggle. It is equally easy to see that Neutra’s buildings say something very different—all those unnatural planes and right angles are the epitome of defiance. And for all of their utopianism, tragedy is always present in these buildings. This, they say, was made. It did not grow. It did not happen. It was not an accident. It was a choice, and as such it can be reversed. It can be destroyed.

Science, a weekly magazine, edited by Philip H. Abelson (American Association for the Advancement of Science, 1515 Massachusetts Avenue, N.W., Washing­ton, D.C. 20005; $2.50 per issue, $48 per year). Science features specialized papers, most demanding specialized knowledge; it also contains the best reporting on the effects of the Reagan administration’s policy of so-called deregulation appearing anywhere in America. The December 3, 1982, issue is typical: there are articles on “EPA’s High-Risk Carcinogen Policy,” “The Odds on Cancer: EPA’s Recent Bets,” and “U.S. Softens Toxic Chemical Accord.” Science’s political writing does not stop with the bureaucracy—no publication covered the Arkansas “creation science” court case more assiduously, or with more clarity. There is currently much comment on the decay of the American “infrastructure” (roads, bridges, and the like); a reading of Science makes it clear that the country’s scientific infrastructure is being purposely subverted, as fetal research is blocked by antiabortion fanatics, as environmentalists are driven from responsible posts and deprived of funding for research and training, as the government attempts to make scientific knowledge and practice a monopoly of the armaments industry. Science handles this beat coolly, in detail, sounding not alarms but a long, low whistle, and it has become essential reading.

Raymonde Linossier‘s Bibi-la-Bibiste, translated and introduced by Keith Waldrop, is the first appearance in English of a bizarre and wonderful five-page—and less than 200-word—novel originally published in Paris in 1918. Dada was mov­ing toward surrealism, and so Linossier’s Jarry-like reduction became a cultural extremist’s touchstone, at least within a two-block reduction of Paris (“Bibisme,” writes Waldrop with a straight face, and for all I know a straight mind, “is among the least well known of the modernist move­ments…”). But the book was not just a joke: among other things, it was and is a horror story, a gnomic subversion of Marianism, because it is the tale of the life and death of a virgin—a virgin who dies of syphilis, syphilis transmitted by means of an “amorous look.”

Still, after more than six decades, Bibi-la­-Bibiste has taken on a certain archness, and it cannot stand up to Diana’s triumph—Kathy Acker’s “translations of the Diaries of Laure the Schoolgirl.” Acker’s writing is about love and sex, but it shoots off in all directions, and one cannot say anything about it without feeling uncertain. It is violent, it is pornographic—and yet it can seem violent without mentioning acts of violence, it can seem pornographic without the use of a single pornographic tool. “My real being alive will never occur where there is rigidity of mentality—too bad for my mind.” There is violence in the syntax of that sentence—and that violence makes even the most polite mention of sex seem pornographic. And yet “This little shit by being insolent and deceptive is making its way toward freedom” seems unutterably clean—as clean as the time a right-to-lifer’s fetus spends in the womb, suspended between the filth of conception and the original sin of birth.

Hello, I’m Erica Jong, a chapbook illustrated with unnecessary drawings of skeletons, is of a piece with “Translations,” though the pretense of satire lasts a bit longer. One can expect that Acker, who has not only taught at the San Francisco Art In­stitute but performed in live sex shows, would be happy to savage the best-selling liberated novelist, and one would be right, at least on page one: “Hello, I’m Erica Jong. All of you liked my novel Fear of Flying because in it you met real people. People who loved and suffered and…”

Those words “All of you” captures with perfect pitch the tone of Jong’s follow-up novel, How to Save Your Own Life, here titled How to Die Successfully. The reader expects more of the same, more expert parody, and Acker gives the reader another couple of pages—and then pulls the string.

I’m a real novelist. I write books that talk to you about the agony of American life, how we all suffer, the growing pain that more and more of us are going to feel. Life in this country is going to get more horrible, unbear­able, making us maniacs cause mania and death will be the only doors out of prison except for those few rich people and even they are agonized prisoners in their masks, the paths, the ways they have to act to remain who they are. You think booze sex coke rich food etc. are doors out? Temporary oblivion at best. We need total obliv­ion. What was I saying? Oh, yes, my name is Erica Jong.

It very swiftly gets worse. You forget “Erica Jong”—you are the subject and the object. And worse than this is Great Expecta­tions, swatches of Dickens, Pauline Reage, even Victoria Holt, all rearranged and re­written, strewn over pages and smeared together, until whatever sense of boundaries—propriety, rules, laws, limits—one brings to the book seems to dissolve, to break up. “Dear Peter, I think your new girlfriend stinks. She is a liar all the way around because her skin is yellow from jaundice, not from being Chinese like she pretends…” (The letter that follows is to Susan Sontag, and it’s even better.) There’s not a whole lot one can do with writing like this except reject it and toss the book across the room, or suspend one’s expectations—perhaps the great expectations of the title—and let oneself be carried along. I never read more than ten pages at a time, and I never read a word less than twice.