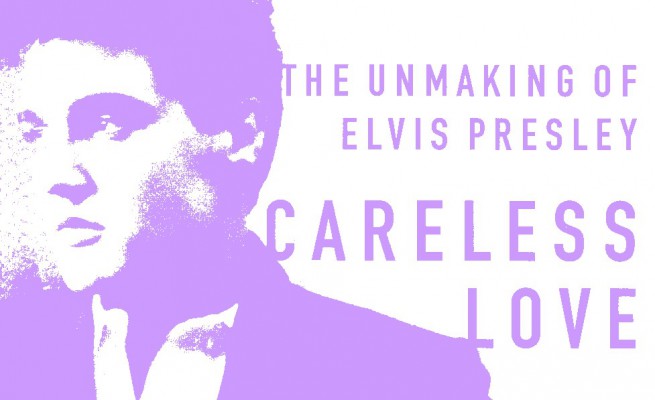 In a signal moment during the jam sessions that highlighted Elvis Presley’s 1968 TV comeback special—the most explosive music of his life—he told a funny story. It was 1956, he remembered, in the midst of the national scandal over his celebration of his own body: “The police filmed a show one time in Florida, ’cause, uh, the PTA, the YMCA, or somebody thought I was… something. They said, ‘Man, he’s gotta be crazy.’ So, the police came out and filmed the show, so I couldn’t move. I had to stand still. The only thing I moved was my little finger.”

There’s an awful match for this moment early on in Peter Guralnick’s Careless Love: The Unmaking of Elvis Presley, the second and last volume of what is now a twelve-hundred-page Presley biography. The first, the celebrated Last Train to Memphis: The Rise of Elvis Presley, took the story to the fall of 1958, closing with the death of Elvis’s beloved mother, Gladys. Now Elvis is in the Army in West Germany, surrounded by a retinue of paid pals from Memphis as one night, in mufti, he enters a seamy Munich strip club called the Moulin Rouge. “Almost from the moment he arrived,” Guralnick writes, “the band started playing Elvis Presley songs and did their best to coax their famous guest up onstage.” But the hand of Presley’s canny manager, Colonel Tom Parker, who always knew the value of keeping his asset under wraps, reached even across the Atlantic. The countless people Guralnick has spoken to tell Presley’s tale in the cadences of real talk, in words you can instantly distinguish from stilted memoir excerpts—thus, forty years after that night in Munich, the regret and revulsion felt by a German woman who was there haven’t dimmed: “He began to sing, and one of his bodyguards said that he should stop—he should know that he is not allowed to sing; it is forbidden. Then he was singing at the table, and that wasn’t allowed either. So then he beat the time, and that wasn’t allowed either.”

“Elvis Presley performed existential acts which helped to liberate an entire generation,” Guralnick wrote in a 1968 review of the comeback special, but that is not the language of his biography. “I wanted to rescue Elvis Presley from the dreary bondage of myth, from the oppressive aftershock of cultural significance,” Guralnick wrote in Last Train to Memphis; his first goal, he said, was “to allow the characters to breathe their own air.” In both books, he has realized that remarkable ambition. But what if the air his characters breathe is itself oppressive, their everyday culture itself a form of bondage? That is the air the reader, like the characters, must breathe all through Careless Love, so perfectly named for an old folk song about how idly hearts are broken. Presley’s artistic discoveries of the early Sun sessions in Memphis, his national and then world conquests—all are left behind. What remains is a chronicle, across nearly twenty years, of a closed world, a king locked in his own prison. Here, every true, distinct event marking a day actually different from the one before it—a recording session where passion leaped up; the first performances in Las Vegas, with Elvis madly, hilariously declaiming his life story from the stage; the strange meeting with President Richard Nixon—is felt as a jailbreak, with the prisoner soon captured or, worse, returning to prison of his own accord. That is the air one breathes as, in his last year, 1977, Presley is propped up and pushed out onstage night after night, while those around him all but place bets on how long it will take him to die.

The story has been told before, but never so convincingly or with such an absence of glee or condescension—and never to such a point of stupefaction. In The Count of Monte Cristo, which in its unabridged form is even longer than Guralnick’s biography, it is the length itself, the slow, steady accumulation of events, that hypnotizes the reader: The Count comes to seem all-powerful, the center of the universe. Here, the same accumulation, but of meaningless repetitions—woman stacked upon woman, drug piled upon drug, humiliating movie after humiliating movie filed on the same shelf, one hired friend after another squeezed into the Edwardian phone booth that was Graceland—is equally hypnotizing. The difference is that the story does not build—it evaporates. As the center of his own universe, Elvis empties out, and so fully that the outside world all but ceases to exist. Guralnick absents himself from this nihilist epic to such an extent that the odd critical comment comes to seem as anomalous—and as thrilling—as Elvis gone missing, the writer’s escape from his own story as he has defined it: “In the closed world in which they lived, the same stories were passed back and forth until they became common property, taking on the status of a larger myth whose literal origins were no longer relevant.”

Last fall in Nashville, Guralnick and I shared a literary forum. I’ve known Guralnick for thirty years, and I felt he sold himself short when he stated his credo: “My approach to writing is the same as my approach to coaching baseball. I tell the kids, ‘Don’t speculate. Stay inside the game.'” My approach is the opposite—speculate; get outside the game—and I think that to find a person who so completely entered the souls of others as Elvis did, you have to do that.

“The one sure thing in life is that you never know what’s going on in someone’s head—that’s what the novel was invented for,” the great cinema verité filmmaker D. A. Pennebaker said recently. “You can’t point a camera at someone and find out what’s in their head. But it does the next best thing: It lets you speculate.” I think that is where Elvis lives—outside of the game as his golden, impoverished life defined it—and you can see it in our faces, as the Presley story continues outside the Graceland walls. I saw it not long ago, flipping channels, when I lucked into the last twenty minutes of John Dahl’s noir western Red Rock West.

Nicolas Cage, Lara Flynn Boyle, J.T. Walsh, and Dennis Hopper are jammed in a car, on their way to the graveyard to dig up the money, the only question is who’s going to die, and they all look like Elvis. Walsh is fleshy, barely in control, the older, damned Elvis; terror is the only real emotion in his eyes, with every other feature forming a mask of puffy, sallow flesh. With her hooded eyes, short, jet-black man’s pompadour, and Eisenhower jacket, Boyle is somewhere between the ’54 Beale Street zoot-suiter and the black-leather flash of the ’68 comeback; take your eyes off her and you’re dead. Whether in costume or not—a young Elvis in Wild at Heart, a seventies clown in Honeymoon in Vegas, a drunk chasing death in his own clothes in Leaving Las Vegas—Cage is always Elvis; here he’s at the wheel as if onstage, sweat pouring, hair askew, ready for anything. Hopper has his own pompadour, gray but higher than Boyle’s. He’s a fifties rockabilly stud carrying his own fifties as easily as the gun he holds on the rest of them. He’s also as much an impersonator as Cage is the real deal; the gun makes Hopper a big shot, but you can hear the whine of the small-time in his mouth. “You think you’re better than me, don’t you, Mike?” he says to Cage, jamming the pistol into Cage’s temple. It’s a line Cage will use as payback when Hopper finally falls down dead: “You know, Lyle, you’re right. I am better than you.” Naturally, he’s the only one who gets away.

Do they look like Elvis because they want to, or because, in the alchemy of culture, this oddball from Memphis had something almost everybody wants? It takes all four of them to even come close to what you could read in Elvis Presley’s face: all those things that, like blessings and curses from the Pandora’s box he opened, he set loose upon the land. Those things were always present, but never with such glamour, with such a spark of perfect rhythm: desire, madness, mastery, waste; bravery, cowardice, generosity, malevolence; beauty, ugliness, humility, and vanity. Elvis remains a haunting: It’s more comforting to see those supposedly contradictory aspects of a common identity in a cast of faces than in one. Is that why we still turn away, embarrassed by the stirrings of Presley’s arrival, or disgusted by the way he left? As the last verses of “Careless Love” have it:

Once I wore my apron low, I couldn’t scarcely keep you from my door.
Now my apron strings don’t pin.
You pass my door and you don’t come in.