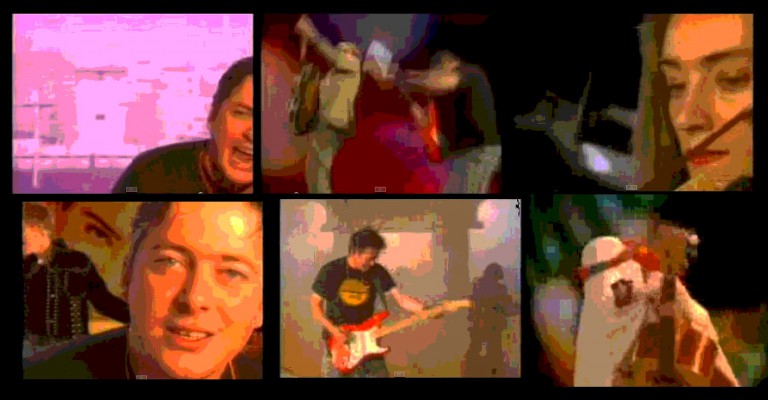 1. Howlin’ Wolf, “Rollin’ and Tumblin’,” from Killing Floor (Chess, Japan, out of print)
One minute of the primeval from the great electric bluesman. The only accompaniment here is acoustic guitar; no band could match the broken country time. The guitarist is un­named, the date unlisted, there’s no other known Wolf recording like it, but there most be more. Where?

2. KALX pledge-drive spots (FM 90.7, University of California at Berkeley, November 10)
“Hello,” says a creamy phone-sex voice. “I’m your Pledge Mistress. If you’d like to make a donation, press one. If you need encouragement to leave your deposit, press…” Even better was an evangelist, droning on and on in plummy, pukey tones about the final struggle between the Mammon of “Commercial Radio” and the holiness of “Listener-Supported Radio,” his syntax impossibly garbled by insensate repetition and the slow train of his mind.

3. David Remnick and Marc Fisher, dispatch, on the resignation of the Czechoslovakian Communist Party presidium (Washington Post, November 25)
“Taxi drivers led a manic procession through Wenceslas Square, honking their horns. A man carried a victory cake to the center of the celebration. All around, people were lighting firecrackers and sparklers. A single trumpeter, like the leader of a New Orleans jazz wedding, led a few hundred people up the promenade.”

4. MTV graphic (November 12)
Picture: the Berlin Wall. Soundtrack: electric version of Neil Young’s “Rockin’ in the Free World.” Title: “ANOTHER BAD IDEA BITES THE DUST.” And another irony buried under it.

5. Elizabeth Shogren, “A New Political Generation” (San Francisco Chronicle, November 25)
“Anne-Kath­rin Pauk, 23, an elementary school teacher and publicist for the Berlin branch of a fledgling political party, exemplifies the role played by the younger generation in East Germany’s fast-paced reforms. ‘A lot of my friends already left, but now my friends are deciding to stay and try to change our country,’ said Pauk… Pauk has brought her own style into her classroom. At the start of each class period in East Germany, pupils stand erect and report to their teacher in military fashion. The first day of her class, Pauk made it clear that she was different. After the pupils reported in their usual way, she stood at attention and sang the American song ‘We’re in the Army Now.’ Then she translated the words for her astonished, giggling pupils. Her students no longer report at the beginning of class.”

6. Actuel sponsorship of pirate radio station off the coast of the People’s Republic of China (c/o L.A. Weekly, 2140 Hyperion, Los Angeles, CA 90027)
Yes, they’ll probably be playing “Rockin’ in the Free World,” but as the sound of the Beatles’ “Revolution” said “rise up” even when the words said “don’t,” the sound of Young’s attack on our version of the Free World may simply say that when you can bring sound to this level, you’re free.7. Vulgar Boatmen, You and Your Sister (Independent Label Alliance CD, Box 594 M, Bay Shore, NY
11706)
From Gainesville, Florida: insinuating songs orchestrated by a quiet band and sung in a reedy voice, the tunes very ’50s in their casualness, present-day in their insistence on doubt. The best tunes center on girl’s names (“Mary Jane,” “Margaret Says,” “Katie”) or on the way metaphors of unrequited love can turn into politics: “Change the World All Around,” a subtle retrieval of the momentum in “Heroin.”

8. Syd Straw, Surprise (Virgin)
More surprising on the radio than on the turntable, where too many words on one track after another trip up the autonomy of the songs. Still, proof that sometimes sweet dreams are made of sweetness.9. Mekons, “Memphis, Egypt,” from Rock’n’Roll (Twintone/A&M)
In the annals of rock epistemology, this account of the struggle between, more or less, commercial radio and listener-supported radio, as one band fought not to be “consumed by rock’n’ roll,” at least corrects Talking Heads’ “Cities,” where David Byrne sang of “Memphis—home of Elvis, and the ancient Greeks.”

10. Grace Catalano, New Kids on the Block (Bantam, $3.50)
You can laugh at fan-bios, but it’s all Creedence Clearwater ever got. There are still no books on Jackie Wilson, the Band, Martha Reeves, Sly Stone, Alan Freed, Fats Domino, or the Monotones.