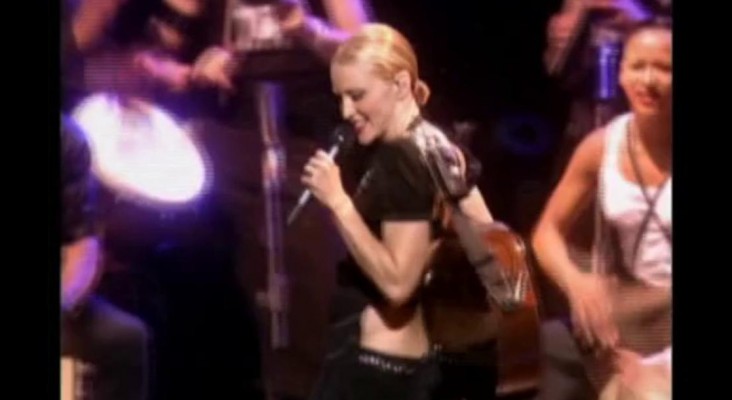 1. Great Pop Moments (That Should Have Happened Even if They Didn’t Division): Valerie Mass, “People” column (Denver Post, Aug. 6)
“Elton John spilled the beans about his former liquor-soaked, drugged-out life in an interview with The London Mirror… John said he met Bob Dylan and George Harrison at a party he was hosting in Los Angeles but was unable to talk any sense to them. ‘I’d had quite a few martinis and [God] knows how much cocaine. So I started babbling on about how [Dylan] had to come up to my room and try on my clothes…'”

2. Bob Dylan, “Summer Days,” from Love and Theft (Columbia)
Speaking of trying on new clothes—four years ago, Dylan’s celebrated Time Out of Mind mapped a country of abandoned roads and emptied cities, and nothing like what’s happening here could have happened there. “Waaaal”—in this song, “Well” is always “Waaaal,” “Yes” is always “Yaaaaaaassss,” pure minstrel diction, as befits an album seemingly named for Eric Lott’s 1993 study Love and Theft: Blackface Minstrelsy and the American Working Class—“Waaaaal, I’m standing on a table, I’m proposing a toast to the King,” the singer shouts from inside a roadhouse where a Western Swing band is running a jitterbug beat as if it’s twirling a rope. On the dance floor women are flipping in the air and couples snap back at each other like towels in a locker room. The singer high-steps his way across the room, Stetson topping his Nudie suit. How much proof do you want that the night can’t go wrong? “Why don’t you break my heart one more time,” he says happily to the woman at his side, “just for good luck?” He stretches out the last word as if he can’t bear to give it up.3. Erase Errata, Other Animals (Troubleman Unlimited)
This four-woman San Francisco combo sings and plays in the clipped, impatient manner of the 1980s Leeds punk outfit Delta 5—until at the end of this first album, with “Dexterity Is #2,” they’re breaking up their sound in the manner of Gang of Four, which sparked Delta 5. The difference is that Delta 5 and Gang of Four premised their music in their leftist-feminist milieu while Erase Errata’s sound comes free of any political context—anything a listener could assume as a premise of what they’re impatient about, or what the break-up of their sound might signify. With borrowed voices they’re beginning their own story from the beginning, and it’s a bright, scratchy experiment—with one eyebrow raised in sardonic doubt.

4. Gillian Welch, Time (The Revelator) (Acony)
New old-timey singer Welch had the Walker Evans FSA look down from the start. Now, with sententious, self-absorbed singing, in a tone that sounds weirdly like David Baerwald—though God knows without his passion—she comes forth as barefoot seer, offering oddly abstract songs about Elvis’s death and Lincoln’s assassination. The idea is that both events are best understood, or felt, as folklore: The Elvis song is put to the tune of “Casey Jones,” while Welch’s second Lincoln song, “Ruination Day Part 2,” explicitly compares Lincoln to both Casey Jones and the Titanic and for good measure rewrites “500 Miles” to shoehorn Lincoln’s funeral train into the number as well. This might be interesting if Welch didn’t sing as if she figured all this out a long time ago and can’t be bothered to get excited about it now.

5. Thalia Zedek, Been Here and Gone (Matador)
Or, for her band Come, Came and Went. There’s a dead spot for a Leonard Cohen song, Zedek’s own tunes in Marianne Faithfull/Weimar cabaret mode when she seems bored, but mostly you might hear a singer-guitarist wondering what would happen if she followed the Rolling Stones’ “Moonlight Mile” to the very end.

6. Madonna, “La Isla Bonita,” from Madonna: Drowned World Tour (HBO, Aug. 26)
In her Eva Peron getup, but looking more like the love child of Marlene Dietrich and Leni Riefenstahl, finally she came up with an oasis in a desert of strutted shtick: a good beat everyone could actually dance to.7. Heavenly, Heavenly Versus Satan (K reissue)
This column shamelessly worships the Oxford ground Amelia Fletcher floats above, be it with Talulah Gosh from 1986 or Heavenly since 1990, when this album, never before released in the U.S., was made. “Shallow” is the perfect moment: a modest guitar pulse, no high notes, a sweetness that can’t last and wouldn’t be worth the time if it could.

8/9. “The Presidential Pen” (New York Times, Aug. 8) & “Satan Gets 2-Year, $6.8 Million Deal” (New York Times, Aug. 9)
And speaking of Satan, why is it that the latter headline led a mere two-inch item, while Bill Clinton’s book deal was covered like a new pardons scandal, with padded news reports followed by arch Op-Ed page lampoons and an editorial that for all of its schoolmarmish distaste (“The one thing that would be most helpful now, to all of us, is candor”) had already collapsed into gibberish? “It’s hard to tell just what Mr. Clinton will sound like in print,” the editorialist wrote. “The man is most himself when winging it in front of a crowd, which means that this may be one of the few presidential memoirs ever written before a live audience.” Monty Python had Thomas Hardy doing that years ago with “The Return of the Native,” but somehow I don’t think that’s the reference here.

10. John Moore, “Lucinda Williams gives stellar, if subdued, concert” (Denver Post, Aug. 9)
“Williams was genial but somber, and not as talkative as usual. Ironically, it was when she began dedicating songs to her favorite dead musicians that the pace picked up…”