“GO FUCK YOURSELF WITH YOUR ATOM BOMB.”

That’s the fifth line of “America,” a poem Allen Ginsberg wrote in Berkeley, in 1956, just as he was finding his voice, and if you don’t think it’s funny maybe you’re not an American. Certainly you don’t live in the same country that was invented by tall-tale tellers—crafty and sly, indomitable and bitter—like Davy Crockett, Abraham Lincoln, Mark Twain, William Faulkner, Ralph Ellison, Cassius Clay, Bob Dylan, and Allen Ginsberg. That was always Ginsberg’s country, whether in “A Western Ballad,” a perfectly still, empty-desert song he composed in Paterson, NJ., in 1948—

When I died, love, when I died
there was a war in the upper air:
All that happens, happens there

—or in a not so famous line from the famous “Howl,” so famously debuted at the Six Gallery in San Francisco in 1955: “The cosmos instinctively vibrated at their feet in Kansas.” The line confused me when I first came across it, so I made fun of it (“Kansas?”) to a friend who’d seen a lot more of the country than I had, as Ginsberg had. “Look,” said the late Sandy Darlington, a writer and folk singer from Washington state, in words Ginsberg’s Kansan comrades Bruce Conner and Michael McClure might have used, “anyone can run off to Japan like Gary Snyder and get the cosmos to vibrate at their feet at the top of Mount Fuji. To get the cosmos to vibrate at your feet in Kansas—well, then you know you really got it.”

Like “Howl,” like the 1966 “Wichita Vortex Sutra” (perhaps Ginsberg’s greatest poem, certainly his most expansive, his most American-geographical: The cosmos doesn’t vibrate at his feet in this Kansas; America itself does), “America” is, among other things, a comic rant. Its cadences are simple, blunt and in perfect balance, so much so that the lines of the poem seem less made than found, picked up off the street, one-liners anybody else might have thrown away that only Ginsberg had a use for. Whether you hear the poem on the page; on Ginsberg’s four-CD set, Holy Soul Jelly Roll, as Ginsberg in stand-up-comedy drag recited the piece to a laughing Berkeley audience in 1956; or as collected on the three-CD set The Beat Generation, in a more somber recording Ginsberg made in 1959, the same qualities are present, and they take the poem out of the time from which it emerged, connecting it to all American time. There’s a bemused but finally baffled—almost defeated—reverence toward the enormity and impenetrability of this thing, this America, this terrible, looming, witch-hunting Godzilla of infinite hope and charm (in 1956, Ginsberg performs the poem as if all of America’s crimes against him, against itself, are a kind of shaggy-dog story, just like the poem itself). There’s an instinctive, soon enough cultivated impiety toward any or all of America’s priests. And at rock bottom there is embrace, the impossibility of separation or exile or even pulling away: America as the tar baby and Ginsberg’s hand stuck. Whenever I hear Ginsberg say America, go fuck yourself with your atom bomb, I see him grinning with pleasure—the pleasure of telling your own country to go fuck itself, to be sure, but also the thrill of Slim Pickens riding his atom bomb at the end of Dr. Strangelove, wahooing himself and everybody else into oblivion. 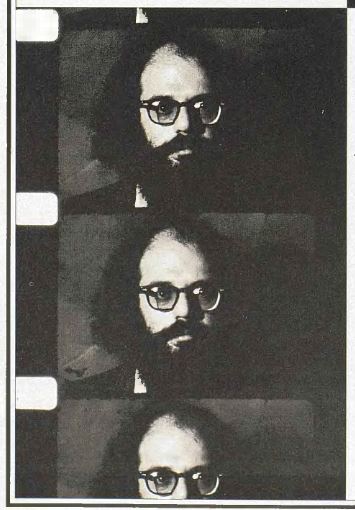 If Ginsberg had reformed himself, renounced a few past errors, smiled through a bit of youthful excess, he too might have been present at Bill Clinton’s first inauguration, along with such dubious characters as Bob Dylan and Michael Jackson: On that day in 1993 the barrier of legitimacy was very low. As it happened, though, Ginsberg never renounced anything, in the same way that a statement often offered by elders never passed his lips: “There is nothing new under the sun.” When I met him last fall, he seemed most excited by plans for his own Unplugged special “with Dylan, Paul McCartney and Beck!” In all of his gestures of quietude or vehemence, basking in celebrity while at the same time raising old grudges from the dead, he was as he’d always been, spreading the word, promoting the cause, honoring his fellows, casing the room.

Even shaking hands for the first time, Ginsberg was cruising. Not well, moving very carefully, dressed like a retired, respectable Jewish bookseller from his parents’ generation, he was a dirty old man in the guise of a clean old man, like the “clean old man” in A Hard Day’s Night—unless it was the other way around. “Fuck the Beatles, fuck the songs, fuck the cute direction and Marx Brothers comparisons,” the late Lester Bangs once wrote, “it’s BLATANTLY OBVIOUS that the most rock & roll human being in the whole movie is the fucking grandfather!” So speaking softly, like a rabbi, Ginsberg spent a solid hour giving me hell for once calling Jack Kerouac a phony. Not because he knew him and I didn’t, but because I hadn’t read all there was to read, hadn’t heard all there was to hear (“You don’t know Mexico City Blues, do you. I didn’t think so. I’ve just recorded it. I’ll send you a copy”). Sitting there with Ginsberg, the America he had so often evoked so eloquently and so completely seemed small enough to see whole, and too hot to touch.