Every record on this list includes some element—a riff, a guitar line, a vocal inflection, a, shall we say, moment of truth—that is beyond the ability of the mind to conceive, or even completely absorb. These records seem like miracles to me.

And they are here for reasons that could never be written down on scores: the authority of Richard Davis’s bass on Astral Weeks; the heartbreaking lyrics of “Any World,” and the confused, determined, Everyman quality in Donald Fagen’s voice; Duane Allman’s emotional precision in the opening of “Loan Me a Dime,” and his abandon at the end; the grace of Sandy Denny on Fairport Convention, and Richard Thompson’s passion; the innocence of Pete Townshend’s singing on “Pure and Easy,” and the astonishing dynamics of the sound; the complexity of the vocals on “Concrete Jungle,” and the spookiness of the guitar solo; Elvis’s ragged, back-from-the-dead shouts in “One Night,” Scotty Moore’s I-Can-Raise-the-Dead guitar, and the background whoop of one of Elvis’s pals when he realizes Elvis has indeed made it out of the grave; the frontier toughness Bob Dylan brings to the second verse of “Apple Suckling Tree.”Rod Stewart’s “Every Picture Tells a Story” is the greatest rock & roll recording of the last ten years. It is a mature tale of adolescence, full of revelatory detail (Rod combing his hair a thousand different ways in front of the mirror), and it contains the only reference to the Dreyfus case in the history of rock. It is also hilarious, and one of the friendliest pieces of music ever recorded. It is rock & roll of utterly unbelievable power, and for most of its five minutes and fifty-eight seconds that power is supplied by nothing more than drums, bass, acoustic guitar and Rod’s voice. Mick Waller should have received the Nobel Prize—in physics, of course—for his demolition work at the end of the first verse. Martin Quittenton’s acoustic guitar playing is well beyond any human award; for that matter, it is beyond human ken. John Lennon once said he wanted to make a record as good as “Whole Lot of Shakin’ Going On.” Rod Stewart did it. 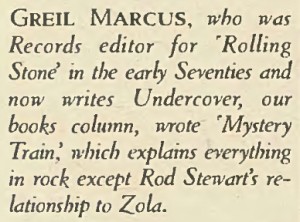