Björn Kurtén’s Dance of the Tiger: a Novel of the Ice Age (Pantheon, 288 pp., $10.95) considers one of the most intriguing events of prehistory: the replacement, about 35,000 B.C., of “Neandertal Man,” or Homo sapiens neandertalensis, by “Cro-Mag-non Man,” the early representative of Homo sapiens sapiens the subspecies to which all present-day peoples belong. It’s a terrible novel, but it’s an extraordinarily interesting book.

Kurtén is a Finnish paleontologist and the author of a first-rate introduction to human evolution, Not from the Apes (Irvington). With Dance of the Tiger, he takes virtually all the known facts about Neandertals and Cro-Magnons (plus much that can’t be known factually, such as details of race, intelligence, bonding) and plays with them. If Kurtén’s plot is strictly on the level of The Empire Strikes Back and his characters just a step ahead of Conan the Barbarian, the story takes life from a blend of inspired speculation (could Neandertals and Cro-Magnons interbreed?) and the fossil and archaeological record (Neandertal technology was conservative, Cro-Magnon technology innovative and aesthetically motivated). As Stephen Jay Gould notes in his introduction, Kurtén is using the novel form to address scientific issues that cannot, for lack of hard evidence, really be discussed in scientific literature. Yet these are vital issues: in what way did these very different peoples think? Can our concept of humanity accommodate the confrontation of two separate subspecies, an event outside the boundaries of recorded history?

Kurtén bases Tiger on a controversial premise of Not from the Apes: “Mankind has repeatedly split up into distinct species [i.e., groups that cannot successfully interbreed] of which all but one has died out”—the dominant species likely considering the others are not humans, but “trolls.” Most scholars prefer a neater, one-species-at-a-time formulation; the problem is, the evidence is not neat. 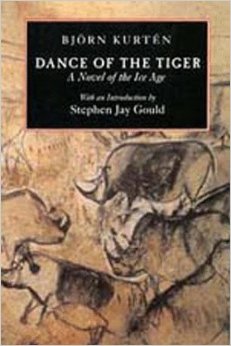 It’s most commonly believed that modern populations evolved independently of the Neandertals, entered Europe about 35,000 B.C., and replaced the Neandertals, who were either exterminated, had already died out on their own, or were genetically swamped. The story as regards Asia and Africa is generally told in the same terms—even though those areas have turned up no true Neandertal fossils, but rather very late remains of Homo erectus, the small-brained human ancestor who first emerged in Africa and Java about 2 million years ago and supposedly died out by 250,000 B.C.

It’s also been believed that the earliest moderns were Caucasian—in fact, the sapiens sapiens designation was once used solely as a reference to populations of European origin. Recent finds have produced a sapiens sapiens skull from Borneo dated to perhaps 40,000 B.C. (as opposed to dates of less than 35,000 B.C. for the earliest modern European finds) and, upsetting all calculations, sapiens sapiens skulls more than 100,000 years old from East and South Africa. Australia has muddied the water by providing modern remains as old as those from Europe—but also a near-erectus population less than 10,000 years old, thus suggesting, against all evolutionary odds, an invasion of sapiens sapiens territory by hopelessly outclassed erectus-like “trolls.”

Kurtén takes full advantage of this ambiguity, using it to subvert prejudices, to demonstrate how populations that are vastly different can practice full humanity—even if neither group can fully comprehend the other. In place in Europe since perhaps 100,000 B.C., and thus adapted to cold, Kurtén’s Neandertals are white, blond and matriarchal. His Cro-Magnons, invaders from the south, are black, tall and patriarchal. Society is highly advanced (if, in Kurtén’s version, rather too casual, or insufficiently sacralized). While Neandertals are courtly and cultivate gentleness (in compensation for their fierce appearance), the smooth-featured Cro-Magnons are aggressive. Cro-Magnons are innately inclined toward representational art; Neandertals are innately incapable of making pictures. The split isn’t completely one-sided. In some ways, the Cro-Magnon world is one-dimensional compared to that of the Neandertals. The former have no real sense of the past; the latter take their identity from it.

In this fanciful passage about a Neandertal woman, Kurtén incorporates good evidence about
Neandertal reverence for age and ancestry, and adds his own ideas about severe limits on the Neandertal ability to conceptualize: that is, his Neandertals can construct a detailed ancestry, but they cannot count. Kurtén also makes it impossible for triumphant sapiens sapiens like ourselves to condescend to an extinct form of humanity.

Dance of the Tiger is an opportunity to grapple with material that every good scholar has found impossibly intransigent. Kurtén may not have solved any mysteries (though he offers a radically imaginative solution to the riddle of Neandertal disappearance), but by giving the story of Neandertals and Cro-Magnons a prosaic dimension, he has wiped out a library’s worth of mystification.