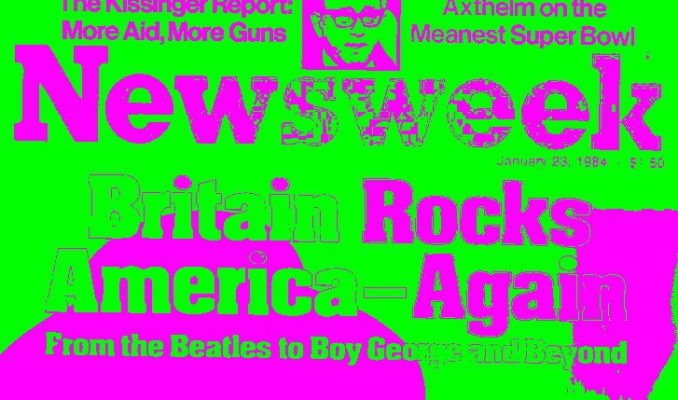 Remember “power pop”? Perhaps like me you can remember what the term was supposed to signify (something about “positive punk”) but nothing that was supposedly signified by it. Ah, there were the…Records, with… (“Starry Eyes,” had to look it up), and a few other radio shots that sounded just like it, but there wasn’t enough Zeitgeist in the mix to make it stick.

Because, as Malcolm McLaren has yet to tire of saying, when you’re creating a pop event, a genre, a pseudo-movement, Zeitgeist is what it’s all about. “The Sex Pistols couldn’t even play! But the idea—” What McLaren usually omits to add, probably because it would interfere with his self-promotion, is that when the Zeitgeist is present in the idea, when it’s about something, when people get caught up in it, the music inevitably follows. From “Anarchy” to “Holidays” the Sex Pistols were the best band on the planet.

“The music isn’t what’s interesting!” McLaren continues. “It’s the attitude!” And now, out of the Movement that Never Was (you remember the New Romantics—Wyndham Lewis invented them back in 1914), an utterly unprecedented breakthrough in the theory and practice of pop has been devised: a commercially potent efflorescence of “rock” artifacts in which the attitude is even less interesting than the music.

The current or anyway momentary “domination” of the U.S. charts by U.K. bands can likely be traced to two factors: the apparently inexhaustible recyclability of Bowie-isms (each new band gets to use a different old LP cover) and the need to block the access of contemporary American black musical forms—there is now a five-year backlog—to the mass-rhymes-with-white audience, which means the need to recycle those forms through white performers. Since there is nothing whiter than a Bowie-ism, and since the trappings of same always make American performers feel and thus look ridiculous, the formula—the New British Invasion—is patent. For that matter, it seems all but preordained.

The music, then, is mostly black pop made charming through self-conscious emotional distance; the attitude is that old stand-by, cool, here made attractive by a celebration of its absolute artificiality.

Since no questions of value are raised, the values that currently have power behind them are reinforced. Rolling Stone has done its cover story on Boy George—indeed an entire “New Invasion” special issue. Time has done its Boy George story. Newsweek‘s planned cover story may have appeared before this article is printed. Ronald Reagan, who recently made a commercial for the new James Bond movie (I am not making this up), may well appear along with Thatcher in a hands-across-the-sea-aren’t-kids-today-wonderful video (I am making that up, for the moment). Video is essential to the “NBI,” and not just because U.K. videos are snappier than most U.S.  offerings: if one must have a video to break a record, that effectively freezes all performers without access to large amounts of capital—or all  performers whose music is not based on a celebration of artifice—out of the game.

Never before has a pop phenomenon appeared rooted entirely in the notion of vapidity, on the thrill of surrender. U.S. mass-market pop consumers are rightly bored with what their own country has offered them: Journey, Van Halen imitations, and, currently, the Motels. They’re bored with ubiquitous, indistinguishable Australians. Costumes are fun and none of the above wear them (the Van Halen imitations wear rituals). So, the NBI—from Culture Club to Duran Duran to Big Country (nice rousing Clash imitation, with a vocal so wimpy it makes you yearn for the worst Strummer croak) to (perhaps) Marilyn or Specimen—is saleable. Some will have hit records, some will die young, some will put money in the bank, some will choose Jesus, and some will make movies no one will see. All will disappear and none will be remembered.

In this time of delicate economic “recovery”—going back to work means unions accepting wage reductions on contracts already negotiated—the American media is agog at the idea of making money. The NBI looks like it might make some—it’s the American dream, once-removed (which is better than the twice-removed music and the three-times removed Bowieist attitude). But it is the meaninglessness of the moment that is truly appealing.

In a video currently featured on TV, crooner Dean Martin—163 years old, once connected to John F. Kennedy through Frank Sinatra, and now, through Frank Sinatra, connected to Ronald Reagan—appears, as is his wont, with a drink in his hand; working off current NBI s&m video language, he pushes many buxom young women into a swimming pool, without appearing to notice what he is doing. The video is directed by his son “Dino.” Remember Dino, Desi & Billy? Remember their 1965 hit “I’m a Fool”? Remember their incredible cover of “Like a Rolling Stone”? Even if you are old enough to have noticed them, you don’t. You have good reason. You are right not to. Your memory is not playing tricks on you. Your memory is doing its job. As it was with the Monkees, as it was with the disco Bee Gees, both of which broke Beatle chart records and disappeared as if they had never been, so it will be with the New British Invasion. The constructed vacuum, enforced today by a certain political climate, calls it forth. In the books that will count, the New British Invasion will be a footnote to the entries on Minor Threat, X, and Grandmaster Flash, which may themselves be footnotes to “Anarchy in the U.K.” Nevertheless, historians will pore over the files of Rolling Stone, of Time, of Newsweek. They will run their fingers down the charts. They will have the semiotic codes. And they will be befuddled. They will ask what it was all about, and the charts and the codes will say nothing. 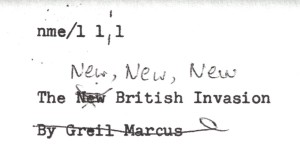