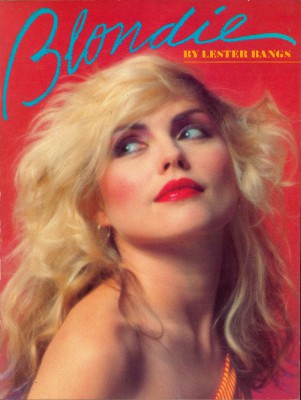 Once the world was a simpler place: Calvin Coolidge was president, Bob Dylan was a Jew, and the illustrated fan-bio could be dismissed. Then Dave Marsh appeared with Born to Run: the Bruce Springsteen Story and, despite the obligatory inclusion of countless random photos, produced a serious book. Now my old friend Lester Bangs has broken the last rule of the genre. His Blondie (Delilah/Simon and Schuster,96 pp., elegantly illustrated in color and black and white, $6.95 paperback) is not even very nice to its subject.

Given that Bangs was merely a hired hand on a project cooked up by a book packager, it’s amazing what he was able to get away with. He isn’t unfriendly; he doesn’t take cheap shots. With his usual multileveled alacrity, Bangs traces the prehistory and history of the band, pretty much telling you all you want to know. He profiles DEBORAH HARRY FOR MURJANI™, the other members of BLONDIE IS A GROUP, and also Parallel Lines producer “Commander” Mike Chapman (Chapman: “Punk-rock doesn’t exist or it does in England but they’re so far behind the rest of the world that it really doesn’t matter.” Bangs: “Guess that takes care of that.”). He covers each album and recounts a lot of good stories. He makes one horrible mistake (“My Boyfriend’s Back” was by the Angels, not the Crystals) and ends, the publisher no doubt holding a gun to his head, with a notably pusillanimous future-looks-bright last page. But Bangs also looks for the reasons behind Blondie’s enormous success, and finds them in the group’s obliteration of emotion.

The thing that makes Parallel Lines so assuredly avant-garde is precisely that it’s so airtight and multiple-varnished… such a pristinely slick piece of product, it’s not even vapid like Barry Manilow, who can at least embarrass/make you throw up once in a while with an “At the Copa”… Each song is a perfectly constructed concave system in which every single piece of information offered up in the lyrics cancels out another corresponding piece of information, kinda like a jigsaw puzzle except at the end instead of a picture you get a perfect blank. And that blank of course is nothing less than Deborah Harry’s face.

I used to think a lot of Blondie’s more recent songs were about emotional ambivalence—now I know that’s investing them with far too much tragic weight. They’d collapse under the strain.

What, one might ask, does this have to do with the future of the human race? In a chapter titled (this is a fan-bio, remember) “On the Merits of Sexual Repression,” Bangs continues the argument:

…the music seems to have no really strong emotions in it, and what emotions do surface occasionally, what obsessions and lusts, are invariably almost immediately gutted by fusillades of irony, sarcasm, camp, what have you, ending up buried.

IF THE MAIN REASON WE LISTEN TO MUSIC IN THE FIRST PLACE IS TO HEAR PASSION EXPRESSED—as I’ve believed all my life—THEN WHAT GOOD IS THIS MUSIC GOING TO PROVE TO BE? What does it say about us? What are we confirming in ourselves by doting on art that is emotionally neutral? And, simultaneously, what in ourselves might we be destroying or at least keeping down?

Irony, Bangs understands, has become the card up the sleeve of contemporary art—or the mick­ey art drops in the audience’s drink. Irony is used to support not only Blondie’s music but the group’s exploitation of Debbie Harry as international sex symbol, and Bangs takes up that topic once he’s finished turning the fan-bio into an anti-postmodernist manifesto. Bangs rightly resurrects an old ad—a picture of Harry graced by the slogan WOULDN’T YOU LIKE TO RIP HER TO SHREDS?—and then cuts through to the heart of the problem: irony is dissolved by its use as public dialogue. On a cult LP, Nick Lowe’s “Cruel to Be Kind” might have been a nice ironic satire of the sappy pop love song; as a Top Forty hit, it was a sappy pop love song and nothing more, even if you’d already gotten the joke. Making Deborah Harry into a mass sexual fantasy may have been an in-joke for the group, a satire of marketing as well as marketing at its most effective: the joke now justifies the group. The group may not get it, or think much about those for whom the joke is no joke at all—and if you don’t think such diddling with popular culture has brutal consequences, listen to a song called “Blondie” on the Iron City Houserockers’ new Have a Good Time (but Get Out Alive). Bangs, writing about the TV Guide ads that peddle posters of Cheryl, Suzanne, Farrah and “Blondie”:

If [the ad] said “Deborah Harry,” chances are almost nobody would send in the $250, because they don’t know who Deborah Harry is. They just don’t want to know anything about any of those women… I think that if most guys in America could somehow get their fave-rave poster girl in bed and have total license to do whatever they wanted with this legendary body for one afternoon, at least 75% of the guys in the country would elect to beat her up. She may be up there all high and mighty on TV, but everybody knows that underneath all that fashion plating she’s just a piece of meat like all the rest of them.

And that’s what all this has to do with the future of the human race. That’s one result of Blondie’s coldness, Chris Stein’s arty smugness, the group’s distance not only from its audience but from its own music. It is, Bangs stops just short of saying, all of a piece.

What Lester Bangs has done with his quickie book is altogether remarkable. He hasn’t stopped me from being a Blondie fan, or from turning up the volume every time “Call Me” comes on the radio—I doubt that was his intention. Rather, he has broken down the self-exculpatory strategies Blondie uses to deny the regressive and conventional meanings of its music. By so doing, he’s made the group count—and made it clear just why listening to a simple song is not a simple matter.