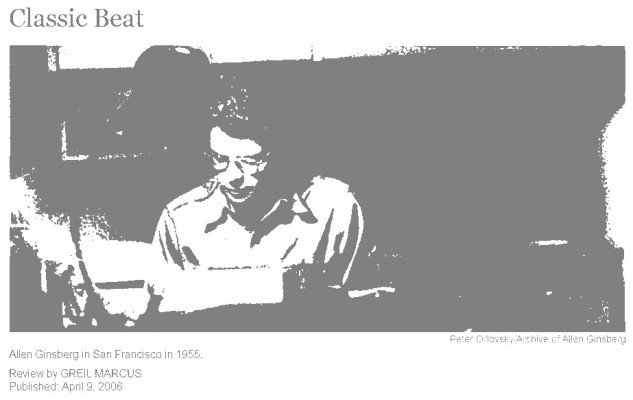 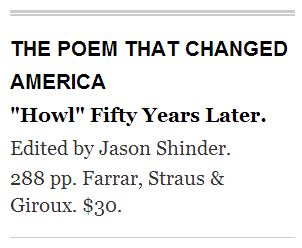 A “Howl” photograph, taken at the Virginia Military Institute in 1991 by Gordon Ball: a row of uniformed cadets, their heads shaved, each with an identical blank notebook, each holding a copy of the City Lights Books Pocket Poets Series edition of Allen Ginsberg’s Howl and Other Poems, published in San Francisco in 1956, subject to an obscenity trial soon after, cleared by Judge Clayton Horn in a ringing affirmation of individual liberty and creative expression—and a flag of revolt, a blow against conformity, a hallowed relic, ever since.

The picture is all irony. What are these presumed soldiers of Moloch—the demon of money and power summoned in the second part of “Howl” to devour the soul rebels of the epic first section, unless, somehow, they can escape to fight another day—supposed to make of Ginsberg’s celebration of a tiny band of comrades determined to free America from itself? Of his paeans to men who “screamed with joy” as they were penetrated by other men, to heroin and marijuana, to suicide and madness? Who knows what the cadets made of “Howl”—in the picture, they look bored. Another assignment to get through.

Ball, a longtime friend and editor of Ginsberg’s, is himself one of 24 contributors to Jason Shinder’s collection of new essays on “Howl” (not counting Ginsberg, with his own comment on the poem, written in 1986, 11 years before his death, and John Cage, with his galvanic “Writing Through Howl,” also from 1986). Like so many of the writers here, Ball forgivably fetishizes the little City Lights book. Like an 18th-century broadside, it was cheap, it was portable, you could read it standing up on a bus and give it away when you got off. It was a key to the enormous readership “Howl” has gathered over the decades, and you can still pick up a used copy for a dollar or so. But like so many, he gropes for something to say. The literary nakedness of the beats, Ball says of beat heroes like Jack Kerouac, William Burroughs, Neal Cassady and the few and then the many who took up the cause, “has something to do with the fact that today national debate includes, as legitimate topics for discussion, things such as homosexuality and heroin addiction.” This is close to babble—equating homosexuality and heroin addiction, and ignoring the fact that to the degree that homosexuality is today part of our national debate, it is precisely because one side of the debate believes homosexuality is not a legitimate topic of discussion—but not so close as Ball on the “spiritual base” at “the heart of the Beat Generation,” which “may offer a redemption of the woeful American legacy projected by Walt Whitman 125 years ago.”

Shinder, Ginsberg’s friend and assistant, a poet (“Among Women”) and a packager (the editor of Divided Light: Father and Son Poems and other anthologies), has produced a tribute album—but a tribute album in which half of the contributors are covering the same song. Rather than “critical texts,” Shinder wanted “personal narratives” from well-known writers on “how the poem changed their lives”: thus the word “I” appears in the first or second line of more than half the pieces here. The famous first lines of “Howl” are quoted from at least 11 times.

This gets tiresome. Sven Birkerts, bidding fair to replace Rick Moody as Dale Peck’s “worst writer of his generation,” offers an unbearable template: “Can I possibly convey how those words”—the first lines of “Howl”—“moved in me, how that cadence undid in a minute’s time whatever prior cadences had been voice-tracking my life?” No, he can’t. He wanders on, into “the moment of Shakespearean ripeness.” “Ripeness” would do the job, but you get the feeling it’s important to Birkerts to remind us he knows Shakespeare—or maybe to equate his reading “Howl” with Edgar’s revelation in “King Lear.”

As it happens, it’s with the critical pieces that Ginsberg’s poem comes back to life—critical pieces that take the shape of real talk. With David Gates there’s an instant change in tone. “I drove to the store the other day”—and you realize he’s not going to tell you he discovered “Howl” there. He parks, hears the boom of an obscene rap song from the S.U.V. in the next spot and starts thinking: “Banned literary mandarins such as Joyce and Nabokov may simply have wanted to go about their hermetic work unmolested, but Ginsberg was a public poet and a provocateur. ‘Howl,’ for all its affirmations, is a profoundly oppositional poem, and it counts on being opposed… It’s a radically offensive poem, or used to be—offensive even to received notions of what poetry is, and it needs offended readers whose fear and outrage bring it most fully to life.”

Ginsberg wrote “Howl” in San Francisco and Berkeley; he read the long first section in public for the first time in San Francisco in 1955, and the whole of the poem for the first time in Berkeley the next year. (A CD of that performance is included in this book.) All sorts of divisions, exclusions, restrictive manners and deferences that were second nature in the East were missing in the Bay Area. If the primary terrain of the poem is New York City, the freedom one could find in California in the 50’s is crucial to the air that blows through the dank rooms of “Howl,” blowing all the way back to New York—but you wouldn’t know it from the Eastern writers Shinder has brought together, as if such Bay Area poets and critics as Ishmael Reed, Robert Hass, Rebecca Solnit, Joshua Clover, or Richard Candida Smith would have less to say about where “Howl” came from and where it went than Jane Kramer and Eileen Myles, who have plenty to say. The America that gets changed in The Poem That Changed America is a Steinberg map, with San Francisco as far away as Tangier. “No one,” Marjorie Perloff says off-handedly, but too revealingly, “New Yorker or foreigner… “

You can forget that when Luc Sante begins to tell his tale—from 437 East 12th Street, which is, as it happens, the same New York City building where Ginsberg lived. As if rising from the swamp of Eliot Katz on “Political Poetics” (right off, with Katz’s invocation of a poet attempting “to envision and create a more humane world,” you somehow know this is going to be the longest piece in the book), Sante changes the discussion as if throwing open a door: “Was ‘Howl’ the last poem to hit the world with the impact of news and grip it with the tenacity of a pop song?” The language is burning, the ideas are jumping and, finally, you are brought into the adventure of the poem, Ginsberg and his fellows turning New York City into their own frontier, then heading west, through Kansas, into Colorado, to the coast, then back again, discovering, you can feel, more of America in the decade before Ginsberg wrote the poem in 1955 than de Soto, Daniel Boone or even Lewis and Clark did in the centuries before them.

“Reading ‘Howl’ aloud or reciting it,” Sante writes, “you could feel the poem giving you supernatural powers, the ability to punch through brick walls and walk across cities from rooftop to rooftop”—faster than a speeding bullet, more powerful than a locomotive, able to leap tall buildings in a single bound, as George Reeves was doing on TV as Ginsberg wrote, just like Scotty Moore’s second guitar break in Elvis Presley’s “Hound Dog,” on Ginsberg’s hydrogen jukebox the year that “Howl” first made it into print. Why not? Sante lived for 11 years in Ginsberg’s building. He was 36 when he moved out, and when he looks back to that moment, the self-regard of adolescent illumination, so common elsewhere in the pages Sante shares, is replaced by something that doesn’t melt at the touch. “‘Howl’ probably meant more to me then than ever before,” he says, “because finally I could reconcile it with my own experience. ‘Poverty’ and ‘tatters’ and ‘hollow-eyed’ and ‘high’ were more than poetic figures by then. I could compile my own list of the best minds of my generation destroyed by madness. The decade during which I lived two flights down from Allen was particularly notable for its body count in suicides and overdoses, and those cadavers really had contained some of the best minds I knew… If ‘Howl’ is a catalog of flameouts and collapses, it is ecstatic in its lamentation. And that is the basic measure of its strength: it is a list of… leprous epiphanies as redoubtable as Homer’s catalog of ships, but rather than stopping at that, it seizes the opportunity to realize all the botched dreams it enumerates. It envisions every broken vision, supplies the skeleton key that reveals the genius of every torrent of babble, reconstitutes every page of scribble that looks like gibberish the next morning.”

Fixed in time in Gordon Ball’s photograph, the cadets are still reading “Howl”; they’re still fixed in irony. But the story the picture doesn’t tell—that, in its way, it protects the viewer from imagining—doesn’t end in irony. As Bob Rosenthal, for 20 years Ginsberg’s secretary, writes in perhaps the plainest lines in The Poem That Changed America, only a fool pretends to know what might happen when a poem finds a reader. “‘Howl’ still helps young people realize their actual ambitions,” Rosenthal writes: “not to become a poor poet living in a dump but maybe to become a physical therapist when you are expected to become a lawyer, or maybe to become a lawyer when everybody expects you to fail at everything.”