The portrait drawn in this book—an enormous compendium of photos, mini-memoirs, drastically reduced facsimile pages from the Los Angeles–based tabloid-form magazine; original band interviews reprinted as inserts; and special sections for Gary Panter’s Jimbo comix and flaming editorials from Claude Bessy, aka Kickboy Face—is of people having fun. While oversize and heavy, the volume is fast on the eye and throughout its nearly five hundred pages maintains a headlong pace. Despite borrowed poses, style uniforms, and studied onstage physical and facial contortions, that sense of fun almost always shines through. It isn’t the radical revelation of self-discovery, of finding a new reality principle or a hidden, suddenly demystified world, that you can see in pictures of London punks from the same time or a little before. It’s the thrill of appearing before other people in a milieu of complete shamelessness.

You can find that here in interviews (“Slash: ‘Why the new name The Germs?’ Pat [Smear]: ‘Because we make people sick, isn’t that obvious?’ Bobby [Pyn, later Darby Crash]: ‘Because we wanted to have T-shirts printed, and we didn’t have enough money for that long of a name. That’s the truth’”) and in the countless photos, sometimes all flashing together as a single image, of bands where guys try to look tough or like autoerotic asphyxiation victims but can’t hide the brightness in their eyes. It’s the shamelessness of having nothing to distinguish yourself from anyone else who’s in the group portraits of bands where people sit or stand together in the most ordinary manner possible while radiating purpose, dedication, and comradeship. It’s not the they-think-they’ve-seen-everything-but-they-haven’t-seen-this shamelessness of Martin Rochus Sebastian von Haselberg and Brian Routh, aka the Kipper Kids, in whiteface and pirate hats, shot from behind, naked except for elaborate leather jockstraps, with shit smeared all over their buttocks—it’s the shamelessness of Gerber, aka Michelle Bell, singer for Sexsick and Vagina Dentata but looking like any fan at any punk club anywhere in the world, blissful, her eyes closed, her grin so big it raises her cheeks, a beer in her hand, holding open her unzipped top to show a crucifix resting on her chest and an in-out pass for a Controllers show stamped on her left breast. 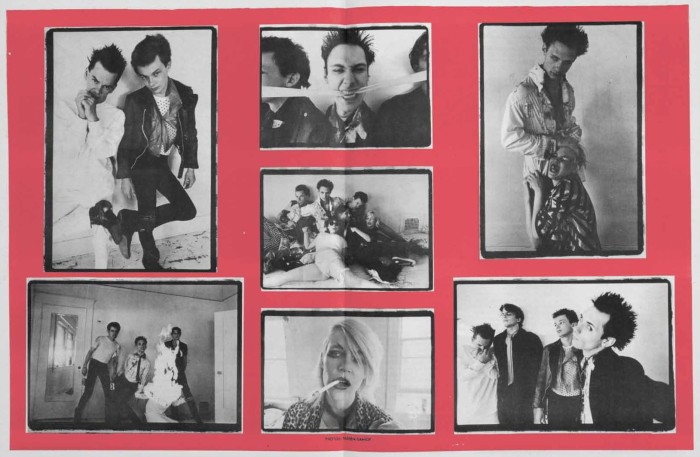 Something was happening in England. And people stateside had heard the almost contraband first Sex Pistols single “Anarchy in the UK,” found copies of the tabloid weeklies NME or Sounds at record stores or out-of-town newsstands, seen the punk-scare stories on TV or in the papers. What was supposed to look horrible to the general public looked, to a few here and there, like a new way of life—or, disguised as a terrible joke, real life. So people began “working with obscure bits of info,” as Slash editor Steve Samiof put it. The story of the magazine, created as well by the photographer Melanie Nissen and editors Bessy and Philomena Winstanley, all of them older than the people they chronicled, is summed up by Bessy in his first-issue editorial, when he says, “This publication was born out of curiosity and out of hope,” and by Samiof, looking back: “We thought we would ‘Be reasonable, demand the impossible’”—the line Hillary Rodham, too, took from the walls of the May ’68 uprising in Paris for her commencement address at Wellesley in 1969—“and that was how we went at it. With a scene that didn’t exist and a magazine nobody read.”

Brian Roettinger and J. C. Gabel’s Slash is a work of bookmaking. The editors drew not only from the magazine itself but from a cache of sixty-five hundred negatives, long believed lost in a house flood in 1983, and used six hundred of these to augment pictures that were actually published. Pictures previously seen and unseen are featured on their own pages, with some filling the whole 8 3/4 x 11 3/4″ space: Gerber, or so many images of Belinda Carlisle—an original member of the Germs, before they played their first show—standing like the ruler of the world in her Germs T-shirt in 1977, proud behind a mask of makeup in a crowd a year later, and, again in 1978 and over a two-page spread, with sweat on her face, fervor in her eyes, and a microphone to her mouth as the lead singer of the Go-Go’s. There is a blowup of a 1977 picture of the Sex Pistols, which in the magazine itself can’t have had anything like the incantatory power it does across two pages here, with Sid Vicious barely visible in the smoke, or perhaps hidden via a developing technique that cloaked the left side of the image in an otherworldly haze; Steve Jones holding his guitar low with a rivetingly clenched determination around his mouth, a sense of mission in a curl of a lip; and Johnny Rotten, at the center, almost not visible at all. He seems to emerge from the inside of the whole crepuscular image, casting a spell that is terrifying in its indecipherability, his shoulders hunched, his head down, his hands poised in the midst of some forgotten ritual—not a ritual he has remembered and brought forward, but one he has stumbled on in just this moment and, without any idea of what it was meant to enact, decided to use. They all look like they came out of the ground, and as if they’re ready to go back.

And what did they enact? They were those obscure bits of information the Slash people were operating on, and as the magazine—which was as much a band as any on the scene, with Bessy’s polemics as lyrics and Samiof’s layout and Nissen’s pictures and Winstanley’s sense of distance as the music—“opened the floodgates,” as K. K. Barrett of the Screamers recalls, “for anyone hiding under a bed in funny clothes with lyrics written on an unemployment check,” it made its own noise. In the hands of the people making Slash, and in their scene that didn’t exist, and then did—“it was a small scene, and every person counted,” Exene Cervenka of X says now; “everyone brought something unique, real, and powerful”—what these apparent demons enacted was happiness. Or so it looks. It looks corny, like any fixed style looks corny five, let alone forty, years later. It looks forced, as anyone operating on information from somewhere else would look. It looks staged, because it was—except as a stage it was, in a Shakespearean echo that not everyone would have missed, a world in itself. And with that echo there was a sense of history, the way an apprehension of the past gives people the idea that they are making their own history, and might not be completely forgotten, at least not right away. “I liked hanging out there,” Exene says of the Slash office on the corner of Fairfax and Santa Monica, “because the building reminded me of old Raymond Chandler Hollywood—you walked up the stairs and there was a door with glass, like a detective’s office.” Listen to X’s first album, Los Angeles, from 1980, and if that’s not exactly what you hear, you can feel Chandler listening over your shoulder.